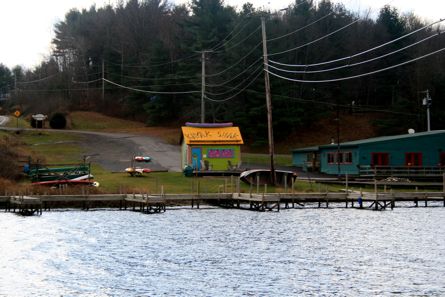 Fish Creek flows east out of Saratoga Lake for 13 miles to Schuylerville, where it empties into the Hudson River. There is a small dam east of Bryant’s Bridge Rd that controls the level of the lake and creek. Motorboat traffic is heavy on the weekends, but is mostly concentrated on Saratoga Lake. The best put in for kayakers and canoeists is off of Stafford’s Bridge Rd at the Kayak Shak, which is part of Saratoga Outdoor Center. As you paddle around the thick lily pads along the shoreline you often will see large carp surfacing and splashing. Some common birds sighted along the waterway include the red winged blackbirds and swamp sparrow.

From Saratoga Springs drive east on Rte 29 toward Schuylerville until you come to the traffic light at Stafford’s Bridge Rd. Make a right and continue over the bridge. The Kayak Shak is immediately on the right.