A fair for all and no fare for anybody! 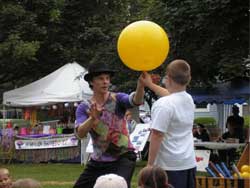 C’mon…when’s the last time you went to a good old-fashioned country fair?

This is the 17th annual Whipple City Festival – held in Greenwich, just east of Saratoga on Rt. 29 – and this year is really going to be big because they’re celebrating the village’s 200th anniversary!

Despite what Jerry Seinfeld said – “there’s no such thing as fun for the whole family” – this fair actually is.  Friday evening at 6pm you’ve got your Bicentennial Parade, complete with floats, followed by live music from Captain Squeeze and the Zydeco Moshers.  Saturday at 8:30am is the traditional Whipple City 5k Race.  From 10-noon you’ve got Bubbles the Clown (avoid this if you’re terrified of clowns), and from 1pm-4pm a live Radio Disney Show with music and audience participation. On Sunday, you’ve got  original  live music from Greenwich’s own Bob Warren…and this is just the  featured  stuff.

Throughout the weekend you’ll enjoy all those old-fashioned family games like mobile laser tag (!); OK, well there’s also a dunking booth, coin toss, cake wheel and that sort of thing.
Plus a big country craft fair, great food, free horse and wagon rides through the village and a live display of animals including emus, alpacas, reindeer – yes, reindeer – and a host of animal demonstrations by the Northeastern Wildlife Institute.

“This year, we really made an effort into getting good quality crafters for the craft fair,” said Kathy Nichols Tomkins of the Greenwich Chamber.

Like I said…fun for the whole family.  And it’s so close!  Don’t miss it!