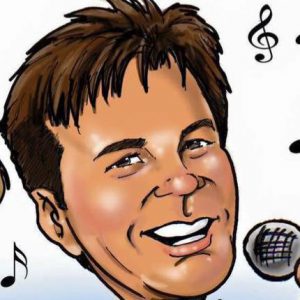 SARATOGA SPRINGS – Popular Saratoga Springs vocalist will be taking his show on the road – literally – later this month.
Michael Panza will host “Saratoga Day” at Casa Calabria at Ocean Manor Hotel in Fort Lauderdale, Florida on Tuesday, March 21st, an event he co-created with Todd Garafano, President of the Saratoga Convention and Tourism Bureau.

“We decided it would be fun to host an evening of music and fun for all of our friends from Saratoga while we are down here,” said Panza, “And the response has been incredible. We’re really looking forward to making this an annual event.”

Panza will be joined onstage by the Charles Cornell Trio, a group of rising stars in the jazz world who also hail from the Capital Region.
“It’s a chance for friends from home and new friends from Florida to get together and experience a great night of music,” said Panza, who added that the event will feature door prizes and other surprises for guests.

“Saratoga Day” starts at 7 pm, and is open to all persons 21 and older. Reservations are being accepted now by contacting Casa Calabria at (954) 982-2191, or by visiting them at 4040 Galt Ocean Drive in Fort Lauderdale. 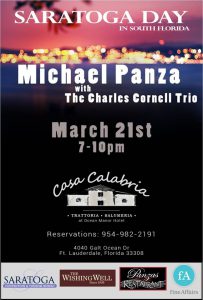