SARATOGA SPRINGS – Whispering Angels of Saratoga Springs (WASS) – a recently organized non-profit that raises funding for the underserved LGBTQ community and at-risk LGBTQ youth –will host its second annual sleep out in Saratoga Springs to raise important funding and increase awareness of at-risk and homeless LGBTQ youth in the Saratoga Springs, Southern Adirondacks and Capital Region areas. The event will be hosted in the backyard of a private residence in Saratoga Springs with VIP reception that will include guest speakers, Mayor of Saratoga Springs, Meg Kelly, Perry Junjulas from The Albany Damien Center, Karen A. Gregory from Shelters of Saratoga/Code Blue, and Teri Wilhelm from the Gay and Lesbian Student Network (GLSEN).

Each person sleeping outdoors will be raising money for their efforts. A pre-sleep out rally will begin at 6:30 that evening to raise more funds and wish the sleep out participants the best of luck. People are welcome to join WASS by sleeping out or by donating. Go to whisperingangels.us to sign up to sleep out or donate to this event on Saturday, April 6. Last winter, the organization raised over $9,000. This year, the goal is to double the amount raised. Deadline for sleep out registration: April 4.

“The WASS Board of Directors is thrilled to host another Sleep Out in Saratoga Springs. This year we want to raise money to help provide safe beds at homeless shelters in our areas for LGBTQ people and youth. At this time there is only one shelter in our eight surrounding counties that allows teens under 18 to sleep in their shelter. This puts LGBTQ youth at tremendous risk,” says WASS President and Founder, Tas Steiner. The board notes that a staggering 40 percent of homeless youth in the United States under the age of 25 identify as LGBTQ. 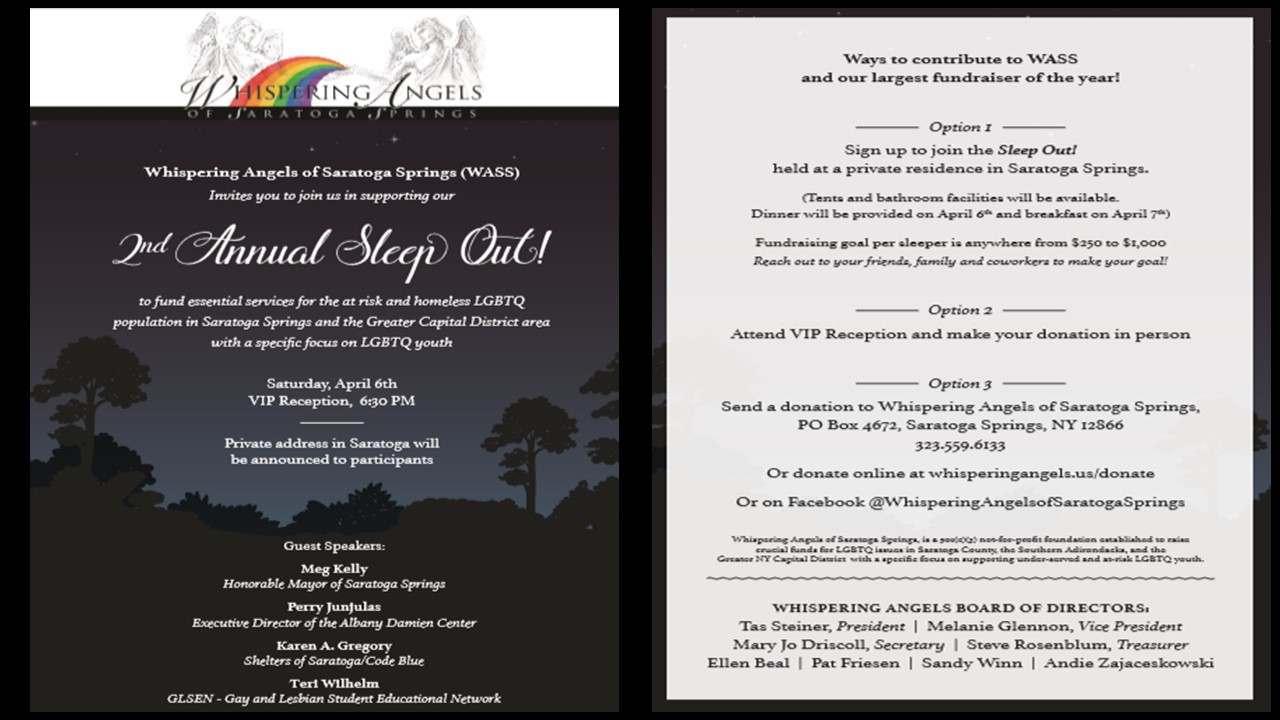 For more information on Whispering Angels of Saratoga Springs, go to WhisperingAngels.us.