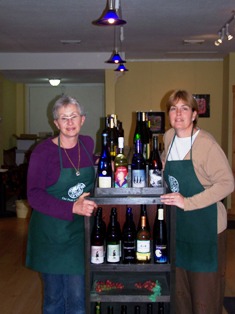 COHOES – Jane LaCivita’s plan for her Golden Years was unfolding perfectly. It included a newly purchased condo Thailand where she would spend her days kicking back after a career in nursing home administration.

Then her cousin-in-law came to town.

When Diane Conroy-LaCivita visited Jane LaCivita in 2005, she made the proposal that would change both their lives: become partners in a business venture located in a city in upstate New York that had been essentially stripped of its economic core and left for dead.

Diane’s plan of action was to renovate three connecting buildings, turn them into retail and gallery space, and help ignite a trend that she foresaw happening to the Albany County city of Cohoes.

To say the mission presented to her was daunting was an understatement, but Jane found herself saying yes to the idea, relocating to the Albany area, and subsequently grunting side by side with Diane as they gutted the buildings to the tune of 55 Dumpster loads of sheet rock, plaster, and other building debris.

“I told Diane the only way I would come back to the states is if I did something different,” recalled Jane.

Diane has a masters degree in historical preservation and initially spent several years canvassing the northeast in search of historic buildings to renovate.

But when her husband Joe, who is a friend of Cohoes Mayor John T. McDonald III, told her about the rows of empty, semi-ancient buildings on Remsen Street, she got the idea to combine historic preservation with entrepreneurship. 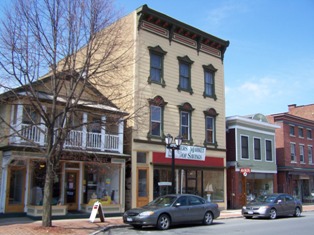 “My family thought I was nuts. A lot of the buildings on the street were boarded up,” Diane recalled. “But when I found out how much history was here, I was sold. Originally I wasn’t looking for economic development, but the two go hand in hand in Cohoes.”

When Diane was first beginning the project, she applied for and received six grants. But the total costs still required the partners to pour their life savings into the three buildings on Remsen Street.

“It was a risk,” Diane admitted. “But we really believed in this. There have been good and bad days, but no days I was actually scared. Jane is very positive. Whenever one of us would hit our hand with a hammer or step on a nail, she’d say ‘There’s no crying on Remsen Street.'”

At one point during the renovation process, they discovered that building No. 184 had once been a residence for Irish immigrants who helped build the Erie Canal.

“This area was once called Irish Hill. The original building at 184 was a shanty built in 1820,” said Diane. “The history of Cohoes is amazing. Houdini performed here, Mark Twain lectured here. The history actually goes back to the Native Americans and some of the roads here mirror their trail patterns.”

“I feel that Cohoes is a bud that’s about to blossom,” said Jane.

And she’s not alone. The women were named among Metroland’s Local Heroes of 2008 for being visionaries, looking at their project beyond the boundaries of a business plan and spearheading a renaissance in the city.

And so far, their vision has materialized without a hitch.

Under the umbrella of Harmony House Marketplace are the wine store, which opened two years ago, followed by the bakery a year later. The 188 Remsen Gallery opened on the second floor several months ago and in April, artisan cheese maker Shaun O’Connor began making cow, sheep, and goat cheese and yogurt on premises.

Mayor McDonald said he couldn’t be happier with the life Jane and Diane’s project has brought to the city.” They have not only brought new business to our community, but new energy as well, which is spreading throughout our community. Their personal touch in how they run their business is consistent with many of the long time business owners that Cohoes has been fortunate to have,” he said. “Their creativity and striving to offer different venues is what attracts even more individuals to our community and is one of the reason why downtown Cohoes is seeing a revitalization. It’s a pleasure today to walk down Remsen Street and see a street with activity. Businesses such as Harmony House and many others, both retail and office, are the driving forces behind this success.”

Diane said the next phase of Harmony House Marketplace will include a tapas bar, also in the center structure, which they hope to have completed by late spring.

Cooking classes at the bakery encourage the use of local produce. Farmers and food producers at the Cohoes Farmers Market, held across from the bakery from 4 to 7 p.m. on Friday, teach many. 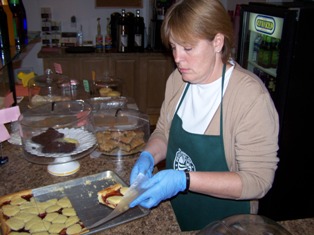 “Our motto is local,” said Diane. “We use local and New York state products and ingredients at the bakery, including real whipped cream and butter cream frosting.”

Jane and Diane, who both have full-time jobs, are assisted in the baking by their daughters Diane and Frances LaCivita and Corinne Clemente.

“It’s been a family affair,” said Jane. “My husband’s relatives, Jay and Tommy Teta, and Vince Morrow, have all been great in helping us.”

They also sponsor day trips to farms and wineries in the state. “Our trips and cooking classes usually sell out,” said Diane.

Their wine store sells only New York state wines and features a different wine purveyor from 5 to 7 p.m. every Friday.

“We envisioned this as a multi-plex that would draw people from around the community,” said Diane.

“We wanted to make Cohoes a destination place,” said Jane. “We both feel there’s so much potential here. In five years we see it blossoming into a Lark Street.”