Visit Saratoga.com For Everything Saratoga
Enter Giveaways Advertise
Note: Saratoga.com is not responsible for posts and comments written by non-staff members.
Home  »  Going Green  »  Driving the 2009 Green Car of the Year 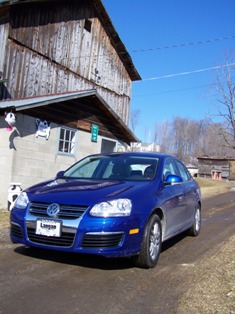 With the memory of gas prices at record highs just months ago and credit increasingly tight, many people are looking for a vehicle that won’t break the bank at the showroom or at the pump. For nearly a million people in recent years, the only answer has been the Toyota Prius. But before you go and join the ranks of the numerous Prius owners, ask yourself, “Do you like to drive?”

Well do you? For many Americans, the answer to that question is a resounding “No!” And there’s nothing wrong with that. Most people just want to get from one place to another in the shortest possible time with the least amount of stress. They want their driving time to be peaceful and uneventful. For those people, there are cars like the Toyota Prius and Camry, Honda Accord and Ford Taurus. Then there are the rest of us who like to get in a car and find a route to our
destination that does not minimize the directional changes, or the distance between the origin and terminus. For those of you in this group, Volkswagen now offers the Jetta TDI.

The Jetta TDI has been named the 2009 Green Car of the Year, which is the diesel engine version of the popular VW sedan I know what you’re thinking – diesel and green don’t usually go together in the same sentence. Mention “Green Cars,” and the hybrid drivetrain comes to mind. Mention diesel, and black smoke spewing out of a dump truck is the image that arises. Actually, VW has been making diesel cars for years, and has developed quite a following of fans. Some of these older models have become coveted for their conversion to biodiesel veggie fuel. But with the advent of stringent clean air standards adopted by California and here in New York in the last few years, VW could not sell their diesel cars. So the engineers at VW went back to the drawing board, and have retooled the engine so that it now passes the emissions regulations for all 50 states.

So now the VW Jetta TDI joins the ranks the other so-called “green” cars. The most obvious competitors for the Jetta TDI in terms of size, price and fuel efficiency are the Prius and Civic Hybrid. The Jetta TDI lags behind its Japanese rivals in terms of official EPA numbers with the German being rated at 29/40 mpg with a 6-speed DSG transmission and 1 mpg more with a manually-operated clutch. The Prius scores 48/45 and the Civic Hybrid rates 40/45. AJ Thurber, the sales consultant for Langan VW in Schenectady, told me that the EPA’s new test cycle underestimates real world mileage by 15-20 percent. He said, “VW knew the TDI would perform better, so they contracted an independent testing company called AMCI to run some real world driving tests, and they yielded 38 mpg in the city and 44 on the highway.” That puts the actual mpg in the range of the hybrid cars.

The good folks at Langan VW gave me an opportunity to take it for a spin, so I jumped at the chance. I took the car up to the Thurman Maple Festival in Warren County, knowing that it would be the perfect proving ground. No highways, just county roads winding through Corinth, Hadley, Stoney Creek and finally Thurman. 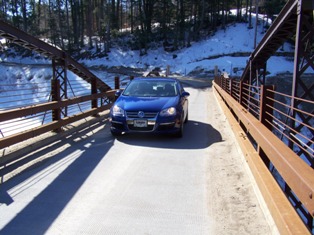 On the road, the Jetta TDI is a pleasure to drive. The car I was driving was equipped with a Sport transmission, which responded to acceleration and deceleration like a manual gearbox. When descending hills, there was no upshifting that is common in automatics, so the engine provided braking, not acceleration. For cornering and steering, letting up on the gas and applying the brakes triggers the transmission to downshift for you. That feature, coupled with the Jetta’s tight suspension, makes driving the twisty, turny roads a real joy. The back roads of Warren County will put any car to the test and the Jetta comes away with high marks. 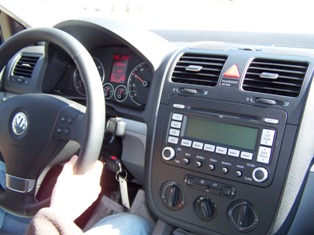 Since the TDI is considered to be a high mileage vehicle, I decided to find out how much driving style affected the mileage. I didn’t do any jack rabbit starts or race down the straights, but knowing that VW aims for fun to drive, I decided to see how much driving for fun would cost. I made no real attempt to maximize fuel efficiency, instead focusing on the fun. Nonetheless, even after a couple of stretches totaling 15 miles of going mostly uphill and squirting from one turn to the next, the mileage according to the trip computer just barely dipped below 27 mpg. By the time we returned to the home, a glance at the dashboard mpg monitor showed an averaged 32.7 mpg. Not bad for non-highway driving over hill and dale!

With a starting price tag for the sedan of just $22,270 (minus a $1,300 tax credit) for a well-equipped model and $23,870 for the TDI Sportwagen, this car is a great deal for those of you looking for excellent fuel economy and a fun to drive car. Even with the current $0.49 / gallon premium for diesel compared to regular gas, you’ll still come out well ahead. It seems to be the perfect choice for those who want an efficient fuel-sipping “green” car but don’t want to look like they’re driving one. And on the off chance you decide to check out a little Fahrvergnügen, it’s right there below your right foot.