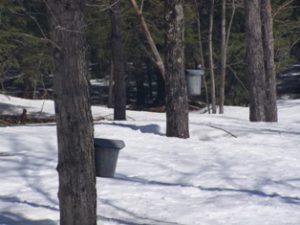 The 2010 Maple Sugaring Season began last week in the Upper Hudson region, with warmer temperatures generating sap flow in area maple trees. The season is off to a very strong start.

“This is what we wait for all year. The sap was running hard last week, kicking off a new maple season,” said David Campbell, a Salem producer and president of the Upper Hudson Maple Producers Association.

This year, there are more sugarhouses than ever participating in the self-guided tour.

For a complete listing of sugarhouses and a guide map, click on www.upperhudsonmaple.com.

Prime sap flow temperatures are 40 degrees or more during the day and below freezing at night. Maple season generally runs through early April.

The Upper Hudson region is among the biggest syrup producing regions in the country.