Sam Grossman was the official bugler for all NYRA-run race tracks, including Saratoga Race Course in Saratoga Springs where he played the trumpet "Call To The Post" before each race. Here we sat down with Sam The Bugler for a 10 Questions interview. 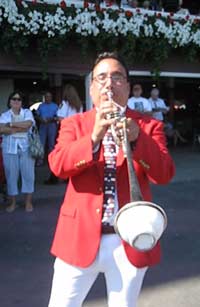 It is an honor to be around the thoroughbreds. Trumpet playing is largely mental, and I practice the trumpet many hours every day. It is always exciting to call our beautiful thoroughbreds to the track. I very rarely screw up the call to the post.

2. How long have you been playing?

I've been playing the trumpet for 37 years! I have been the NYRA bugler for 15 1/2 years. And I've been playing in bands for 20 years on Long Island. I play a coach horn and a herald trumpet. Both are made in California by Kanstul Music.

3. What can you play besides the Call To The Post?

At Belmont, Aqueduct, and Saratoga racetracks I play whatever songs the patrons request. I play lots of birthdays, anniversaries, and office parties. The most requested songs are The Godfather theme, Danny Boy, The Call To The Post, and Fugue For Tinhorns from Guys and Dolls.

4. Have you met many famous people in your career?

I have met many famous people in my years at the track. Most of them were egomaniacs. However, I have met some very interesting people. President Clinton was very magnetic and charming. Giselle the supermodel was delightful! Woody Allen and his family were memorable.

Gambling is not one of my vices. I am friends with many of the jockeys. I have a great respect for who the jockeys are and what they do.

6. Where are you originally from?

I am from Long Island. I have a sister and a twin brother. Spring is a violinist. Irv is a jazz trumpeter.

7. What is your favorite part about the Saratoga racing season?

My favorite part of the Saratoga meet is the vibrant, lovely people! Saratoga Springs is like going to a different planet. The people are fabulous. I hope to retire there one day.

8. What did you think of the 2005 Sam The Bugler bobblehead?

The bobble-head of me was very flattering. I have made a huge effort for 15 1/2 years to get noticed. I have done promotions, and special events that no bugler had ever done. For example, I've been several times to ring the bell at the New York Stock Exchange. I've played our National Anthem at Yankee Stadium many times. I am constantly trying to promote horse racing in a positive light.

9. What are your hobbies aside from being the official NYRA bugler?

Away from the racing I enjoy baseball very much. I often play with my boys, Aaron and Maurice. I love ping-pong, and chess. I play trumpet in Full House. It's a classic rock band with a 3-piece horn section (trumpet, trombone and sax).

Saratoga is "paradise" for me!

More of Sam The Bugler...
Bugle "Call To Post" At Saratoga
Afternoon Adventures With Sam