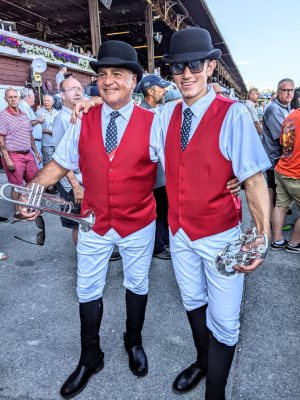 The bugle "Call to the Post" is a popular tradition at Saratoga Race Course and other horse racing tracks. This bugle call is played to signal that horses should be at the paddock exit and ready to proceed to the track for the next race.

Previously, the bugle "Call to the Post" was played by Sam Grossman, who was recognized as NYRA's Official Bugler for over 20 years. However, for the 2022 summer season at Saratoga Race Course, local father-son duo Tony and Carson Gambaro will take over the traditional bugle calls.

Tony Gambaro, who spent a decade with the New York Players before starting his own band, Ten Most Wanted, will play the "Call to the Post" on most racing days of the 40-day meet. When he is unable to play due to prior commitments, his son Carson Gambaro, who is a recent graduate of Syracuse University, will be the alternate bugler.

On Opening Day, Thursday, July 14, and Friday, July 15, both Tony and Carson will play the "Call to the Post" side by side in their uniforms to get the season started.

<< Back to the Saratoga Race Track Guide