Whether you're riding on quiet country roads, over rolling terrain, across beautiful bridges, or through a lush forest, biking offers a wonderful feeling of freedom. Not only is it an excellent exercise, but it's one of the greatest ways you can experience a region. For a memorable ride to historic sites, local landmarks, parks, and natural attractions, plan a trip to one of these bike routes in Saratoga County, NY. 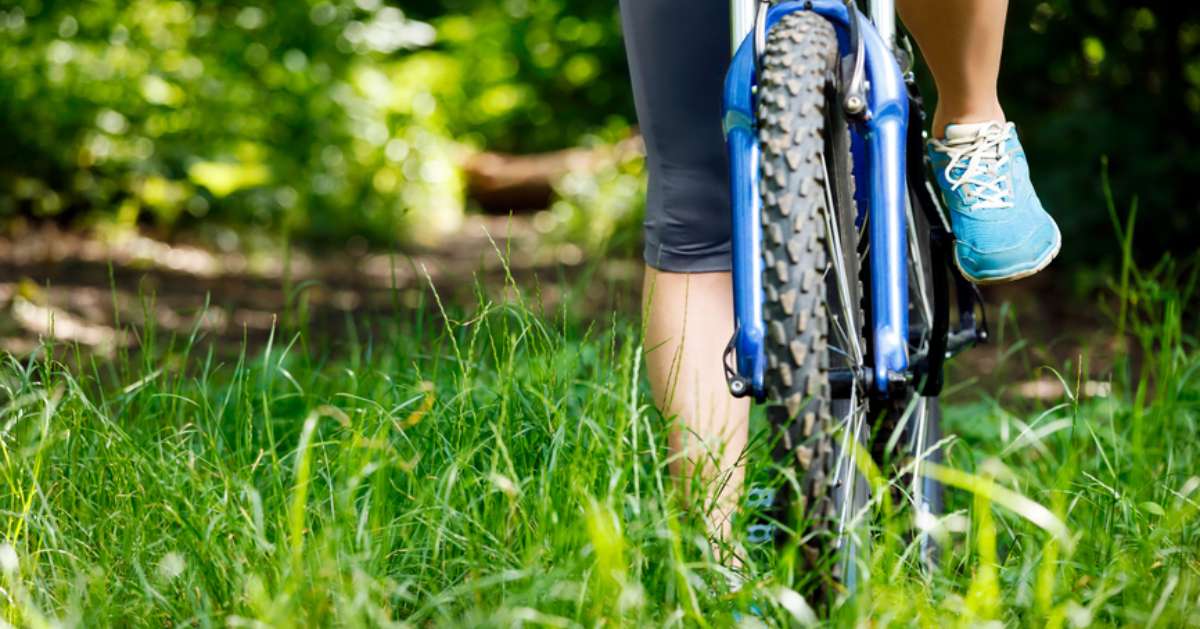 Saratoga Springs is a bicycle-friendly community with a variety of trails and streets to follow. To showcase some of the best parts of the city, this bike route will bring you from downtown Saratoga to Congress Park, Saratoga Spa State Park, and other local hotspots. 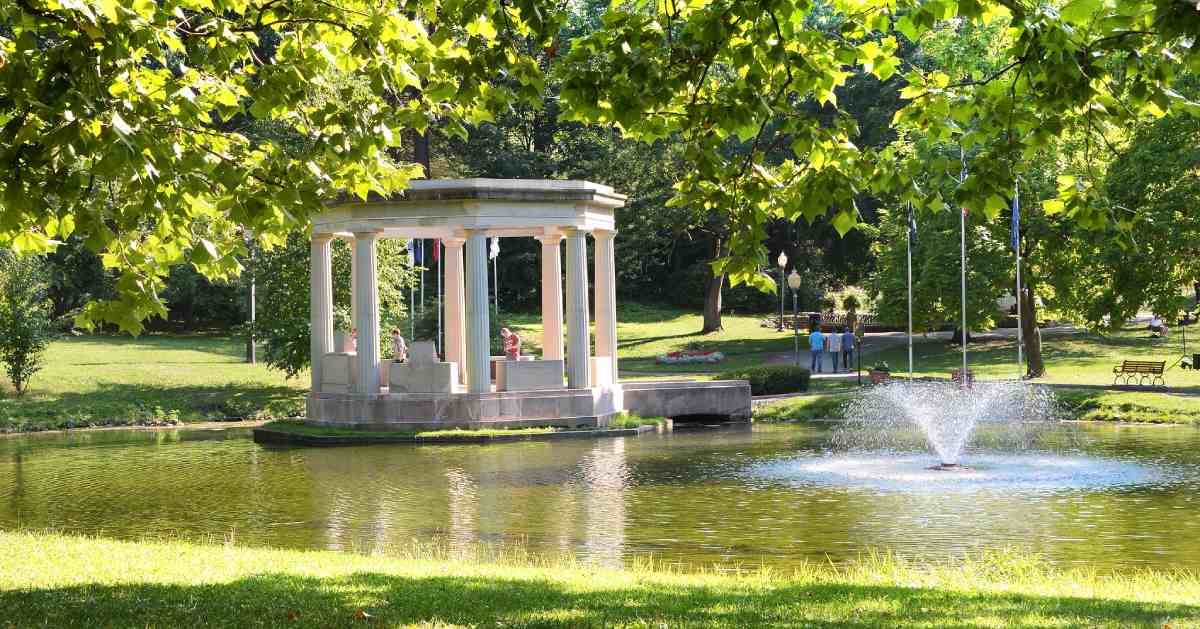 Nestled at the southern edge of downtown Saratoga, Congress Park is a popular park for strolling, biking, picnicking, and relaxing. The park is home to ornate fountains, mineral springs, a War Memorial, an 1870s casino building, and more attractions.

Enjoy a short ride through the park, and then make your way west to Railroad Run, a .5-mile trail that will bring you into the northern entrance of Saratoga Spa State Park. This state park features miles of recreational and nature trails, and you can easily spend some time exploring them all. After you've checked out the historic buildings and mineral springs, it's time to continue on the bike route.

Get a Taste of the Excitement at Saratoga Race Course

The next section of the route will lead you out of Saratoga Spa State Park and northeast toward Saratoga Race Course. On racing days during a typical summer, you'll see the racetrack full of people and a lively atmosphere as you ride down Union Avenue.

Walk Through the Serene Yaddo Gardens

Editor's Note (9/21/2021): As of this note, Yaddo Gardens remains closed to the public. A reopening date has not yet been announced, but we will update this note when there is an announcement.

Before you reach the Adirondack Northway, take a right turn from Union Avenue onto Henning Road, which will take you to Yaddo Gardens. Yaddo is an artists' retreat with vibrant gardens that are open to the public year round. Park your bike and experience a self-guided tour of the Rose Garden, woodland rock garden, and pergola.

To get back to the starting point, you'll ride west on Union Avenue back to an intersection with Nelson Avenue. Follow Nelson Avenue to Spring Street, and then ride up the road to the Putnam Street Parking Lot. 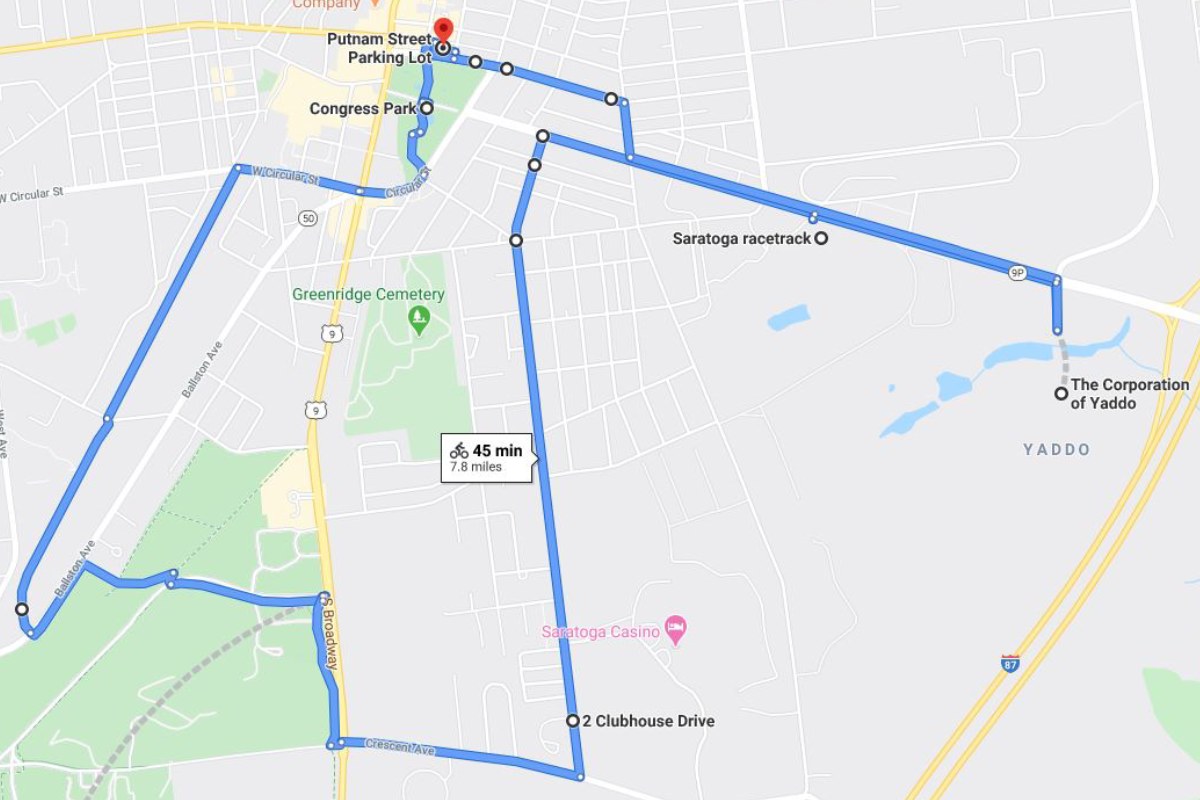 Schuylerville is a village that's overflowing with history, and you can learn all about it while biking to various historic sites and landmarks. We've designed a bike loop through the community that begins and ends at Hudson Crossing Park. This route will take you to Fort Hardy Park, the Schuyler House, the Saratoga Monument, and beyond.

Note: Although this route is only 5.8 miles round trip, it's recommended for experienced riders with mountain or gravel bikes, as you'll encounter some uphill and gravel sections along the way. 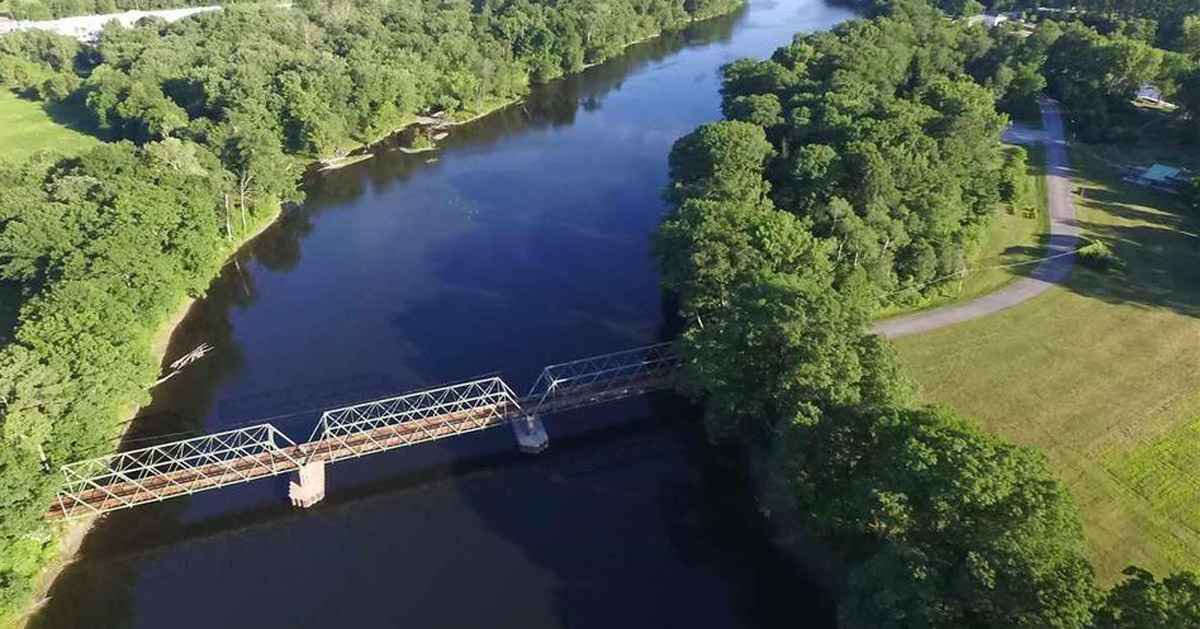 To begin, take a drive to Hudson Crossing Park, a year-round recreational and educational park that's open to the public. Visitors may park their car and enjoy the picnic facilities, fishing and birding sites, views of the Hudson River and Champlain Canal, and two miles of nature trails.

Hudson Crossing Park's trails are open to hikers and bicyclists, so if you'd prefer, you can take a short ride through the park before following the rest of our route. You'll find informative signage displaying facts about nature and the local area.

When you're ready to officially start this bike route, head to the southern entrance of Hudson Crossing Park and ride down the Old Champlain Canal Tow Path. This path will bring you along the Hudson River to Fort Hardy Park. Back in 1755, Fort Hardy was built at this site and served as a supply post for expeditions against Crown Point. Today, it's a public recreational park with a playground, picnic area, and more.

Editor's Note (4/29/2021): As of this note, both Saratoga Monument and the Schuyler House remain closed until further notice.

From Fort Hardy Park, continue south toward the local post office and get back on the Old Champlain Canal Tow Path. This stretch of the path will bring you over Fish Creek to the General Philip Schuyler House, which is open seasonally for visitors and tours.

Next, leave the Schuyler House and follow the path onto U.S. 4, cross the bridge, and then ride west toward two historic sites - Victory Woods and the Saratoga Monument. Victory Woods is a .5-mile self-guided walking trail marking the final encampment for the British Army under General Burgoyne before their surrender to American forces. Located just around the corner from Victory Woods, the Saratoga Monument is a 155-foot tall stone obelisk commemorating Burgoyne's surrender.

Note: From U.S. 4 to Victory Woods, you'll be biking uphill along Burgoyne Street for about .5-mile. We recommend having experience biking up and down hills before attempting this route.

Your return to Hudson Crossing Park will take you along picturesque farmland and country roads. One of the roads, Starks Knob Road, features a short trail leading up to Stark's Knob, a basaltic pillow lava formation that's around 440-460 million years old. Get a close look at this unique natural attraction, and then ride south on U.S. 4 back to Hudson Crossing Park. 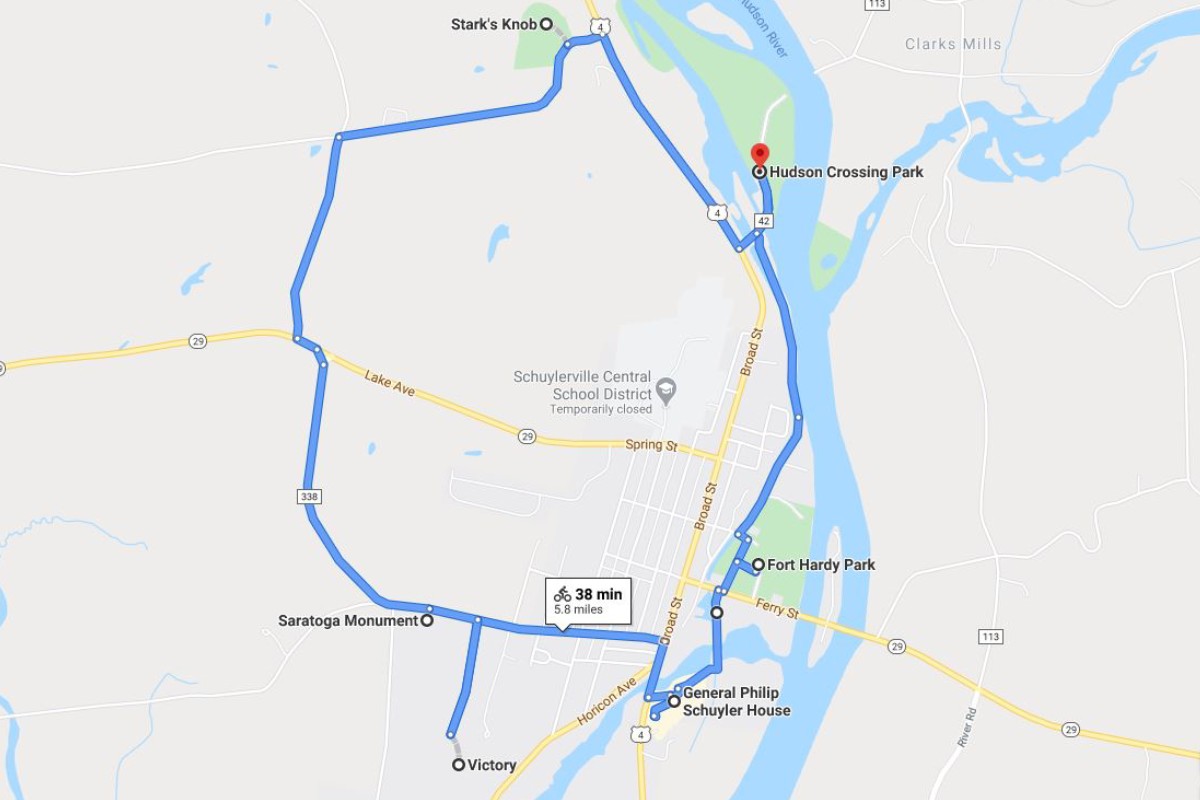 One of Saratoga County's most scenic bike routes is located at the Vischer Ferry Nature & Historic Preserve in Clifton Park. Vischer Ferry comprises 700+ acres of wetlands, floodplain, and natural habitats, an abundance of nature trails, and two Erie Canal towpath trails. This route will bring you down an old towpath trail that has been transformed into a multi-use recreational trail. 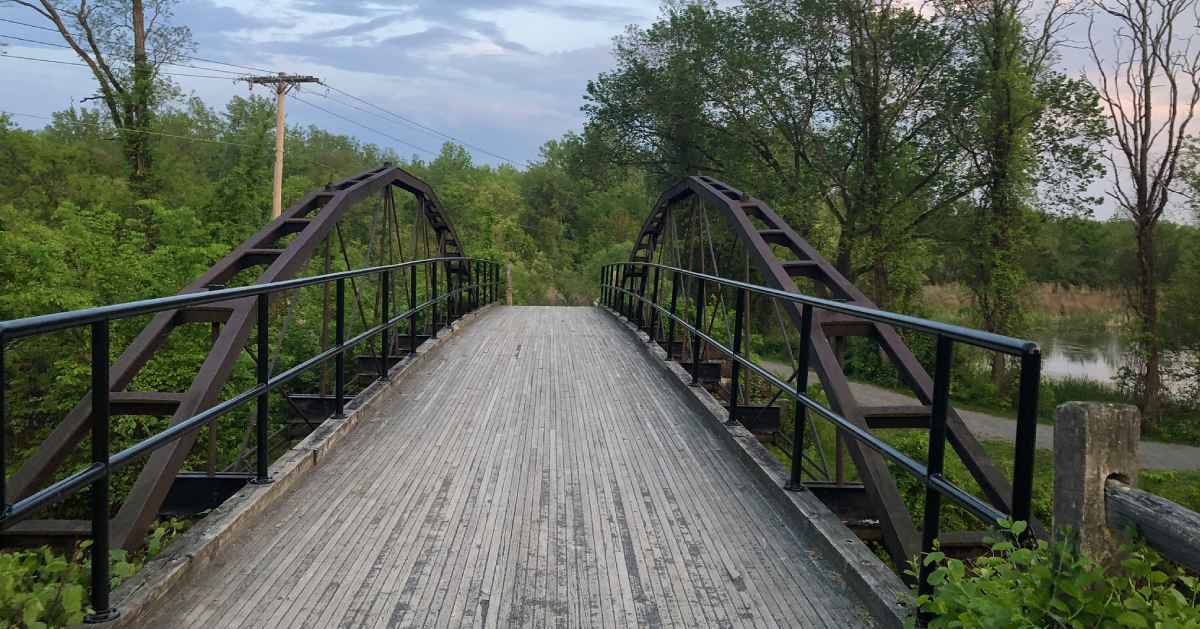 Although there are several entrances to the towpath trail, this bike route begins at the Lock 7 Dam Overlook, otherwise known as the western gateway to the Vischer Ferry Nature & Historic Preserve. This area offers a panoramic view of the historic Lock 7 Dam on the Mohawk River. Park your car in the gravel lot and prepare to head down the nearby bikeway toward Vischer Ferry.

This designated bikeway follows the Mohawk River shoreline, and you can enjoy beautiful views of the natural surroundings during the ride. Eventually, you'll reach a three-way intersection with Ferry Drive and the Towpath Trail. If you'd like a short detour, head north onto Ferry Drive to Riverview Road and the Vischer Ferry General Store. This local hotspot offers breakfast, lunch, snacks, and other goods.

Head back to the three-way intersection with the Towpath Trail, and begin biking east along the trail. The Towpath Trail includes a stop at Lock 19 of the Erie Canal and opportunities to slow down and appreciate this peaceful preserve.

See the Sights From an 1862 Whipple Truss Bridge

At the end of the Towpath Trail, you'll be at an intersection with Van Vranken Road. You can turn right to ride deeper into the preserve, or turn left and cross the 1862 Whipple Truss Bridge. We suggest you turn onto the bridge, get a good look at the wetlands below, and then ride one mile down Riverview Road to Clute's Dry Dock, a historical landmark and wildlife viewing area.

Fun fact: The ride down Riverview Road is part of the Mohawk Towpath Byway, a series of local, county, state, and federal highways that follow the Erie Canal between Schenectady and Waterford. Today, the Byway is a popular route for bicyclists.

To return to the Lock 7 Dam Overlook, you will follow the same route back starting at Clute's Dry Dock. If you didn't stop at the Vischer Ferry General Store earlier, now would be a great time to get a bite to eat near the end of your ride. When you've finished with your meal, follow the bikeway north to the original parking area. 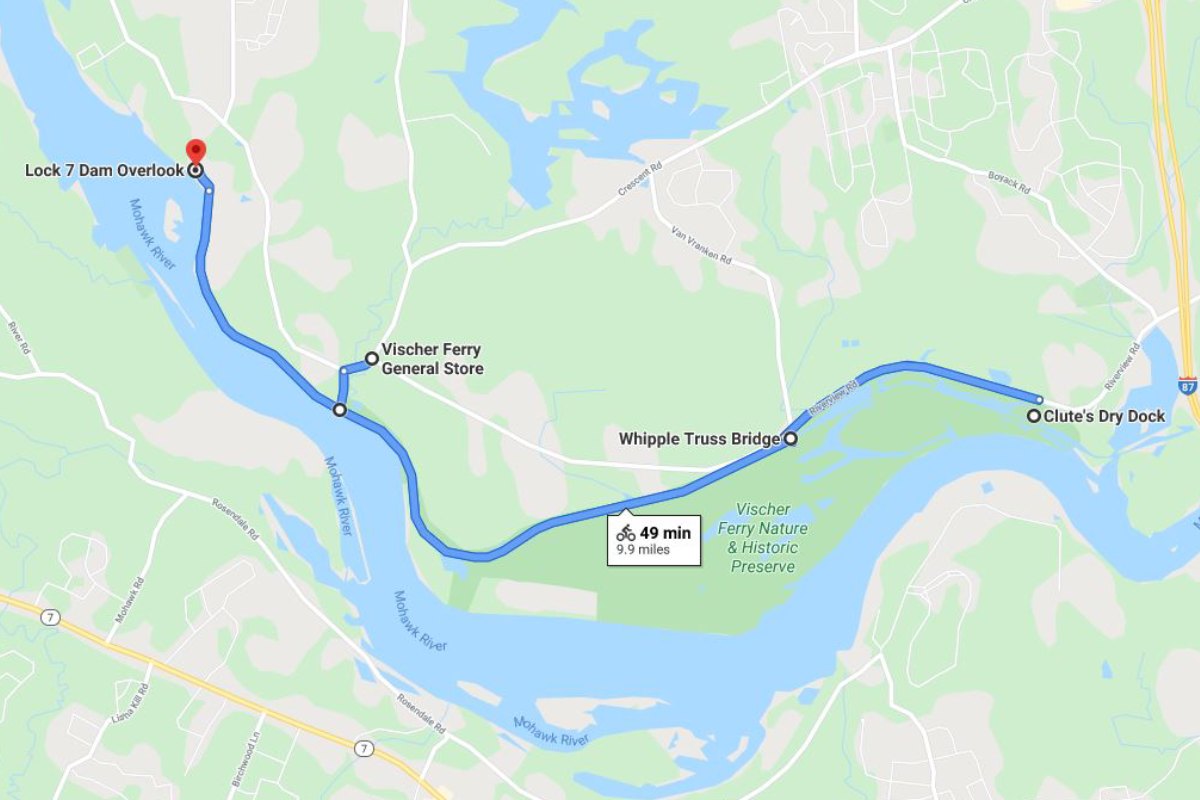 The Village of South Glens Falls is nestled on the south bank of the Hudson River across from Glens Falls, and it's a great place for a bike ride around a small community. Along the way, you can look for local birds, admire the Hudson River, visit a historic home and museum, and see the famous Cooper's Cave. This bike route features a scenic byway and side streets that will take you to each of the recommended stops. 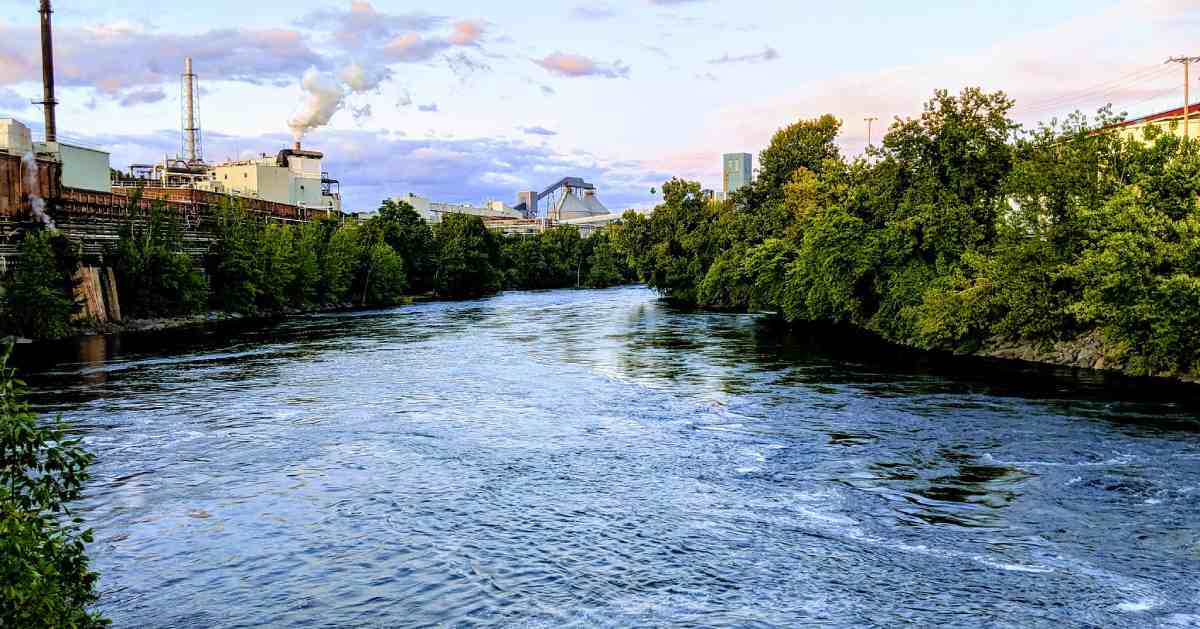 Cruise Down the Scenic Betar Byway

From the Historical Park, begin your ride down the Betar Byway, a paved walking/biking path that follows the Hudson River shoreline. The Betar Byway overlooks the river for much of its length, and you'll pass through mixed woods, a small wetland area, and a beach. It's a popular birdwatching trail, so keep your eyes open for songbirds, waterfowl, and other species as you travel south.

Navigate the Streets to a Historic Home

When you reach the end of the Betar Byway, you'll arrive at Route 9. From here, ride across two crosswalks, and then head east on Charles Street. Our directions below will guide you through the residential neighborhood as you make your way to the Parks-Bentley Place, a historic house built in 1766.

The Parks-Bentley Place is now a museum and the home of the Historical Society of Moreau and South Glens Falls.

After you've spent a little time learning about local history at the Parks-Bentley Place, our route will bring you back to the northwestern corner of the village. However, before returning to the Historical Park, make a short detour down Cooper's Cave Drive to the Cooper's Cave landmark. From the overlook, you will be able to see the cave, which author James Fenimore Cooper made famous in his book The Last of the Mohicans.

When you've finished snapping a photo or two, go back up the road a short distance to the Historical Park. If you'd like, you can have a picnic to celebrate the end of your trip, or take a quick car ride to Mr. Bill's Car Hop for fast food and ice cream. 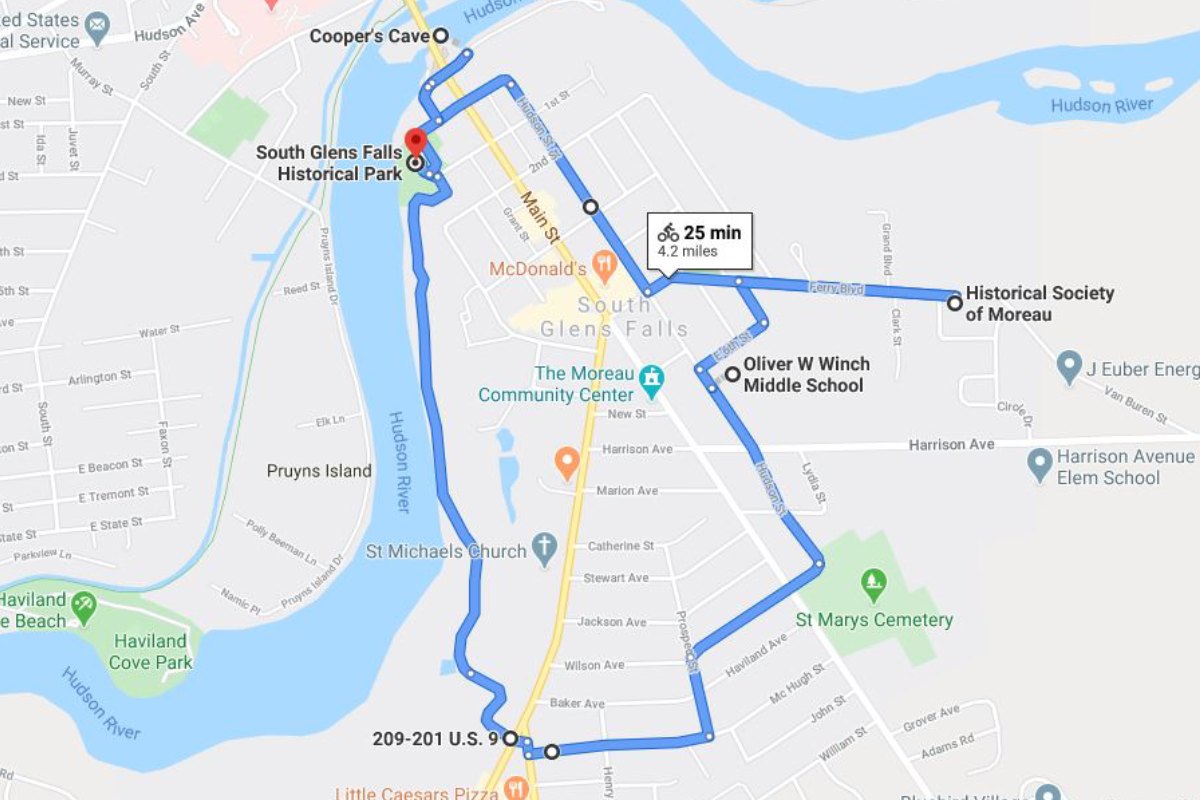 Ready to have fun and pedal away the day? Prepare for your next bike ride through Saratoga County!