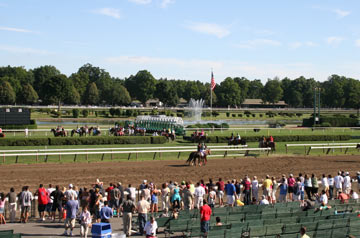 The $25 million loan will preserve thoroughbred racing seasons at Saratoga, Belmont and Aqueduct, which are run by the New York Racing Association (NYRA).

This puts much concern over the future of racing in New York State at ease. Just a few days before this bill passed (and despite the Governor's reassurance that they would get the loan), NYRA notified its staff of over 1,400 workers that the association planned to close tracks in early June after the Belmont Stakes, meaning the Saratoga racing season would not occur this year.

Luckily for local businesses and thousands of tourists, the racing season has been saved!

Saratoga businesses are extremely reliant upon the Saratoga Racing meet, from hotels, to restaurants, to convenient stores. In the 6 weeks that the meet runs $230 million is generated for the local economy and 1,500 jobs are provided by NYRA during the Saratoga meet.

Gov. David Paterson introduced the bill to loan NYRA the money needed to continue operations in the absence of an approved budget for this year. The conditions of the loan require NYRA to repay the money by March 31, 2011 -- or within 30 days of the installment of video lottery terminals at the Aqueduct track.

Bottom line: It is a sure bet there will be racing this summer!

Looking for more information about the Saratoga Race Course? You can find helpful information on tickets and seating, parking, dress code, directions and more right here on Saratoga.com.

For even more information on the Saratoga Racetrack, check out SaratogaRacetrack.com or visit NYRA online.

Want to stay up to date on all the happenings in Saratoga? Become a fan on Facebook!