Visit Saratoga.com For Everything Saratoga
Enter Giveaways Advertise
Note: Saratoga.com is not responsible for posts and comments written by non-staff members.
Home  »  Scholar  »  Scholar of the Month: Damian Okrasinski

SARATOGA SPRINGS – “I want to make things easier for people. Particularly those who need it most.”

So stated Damian Okrasinski, our Scholar of the Month, in detailing his desire to pursue a profession in Bio-engineering: Developing a better heart monitor for instance, or improved artificial limbs. To that end, Damian, now a senior at Saratoga High School, has visited and applied to four branches of SUNY: Binghamton, Buffalo, Stony Brook and Canton. He has also applied for a SUNY Excelsior Scholarship.

Damian is smart. And talented, in many areas, as you will see. Yet what impressed me most, as we spoke, was the ability to demonstrate empathy for others. You see, all the participants in the Saratoga Sponsor a Scholar are by definition, smart – each in their own way. But Damian has the experience at a young age to note that sometimes that alone is not enough. He wants to give a break to others, because he has received a few along the way.

For one, he was accepted into the Saratoga Sponsor a Scholar program later than most. He joined as a junior, when most are a year into the program. Spotted by a biology teacher. Jody Visconti, as someone who had the raw ability, but could maximize that ability through the discipline that SSAS requires of all its participants.

For another, he had a mentor, Norbert Hanus, who already had one Scholar that he was mentoring, but saw, like Ms. Visconti, enough to want him to commit to mentoring a second Scholar. The mentoring process is often key to making the SSAS program work best. Exposure to life experiences from successful people can show a bona fide path to success. Mentoring can be going on college visits, but also exposure to a wide range of activities. “My goal, besides encouraging him on his path to college, is to introduce Damian into activities that allow him to expand his experiences.” Norbert said. 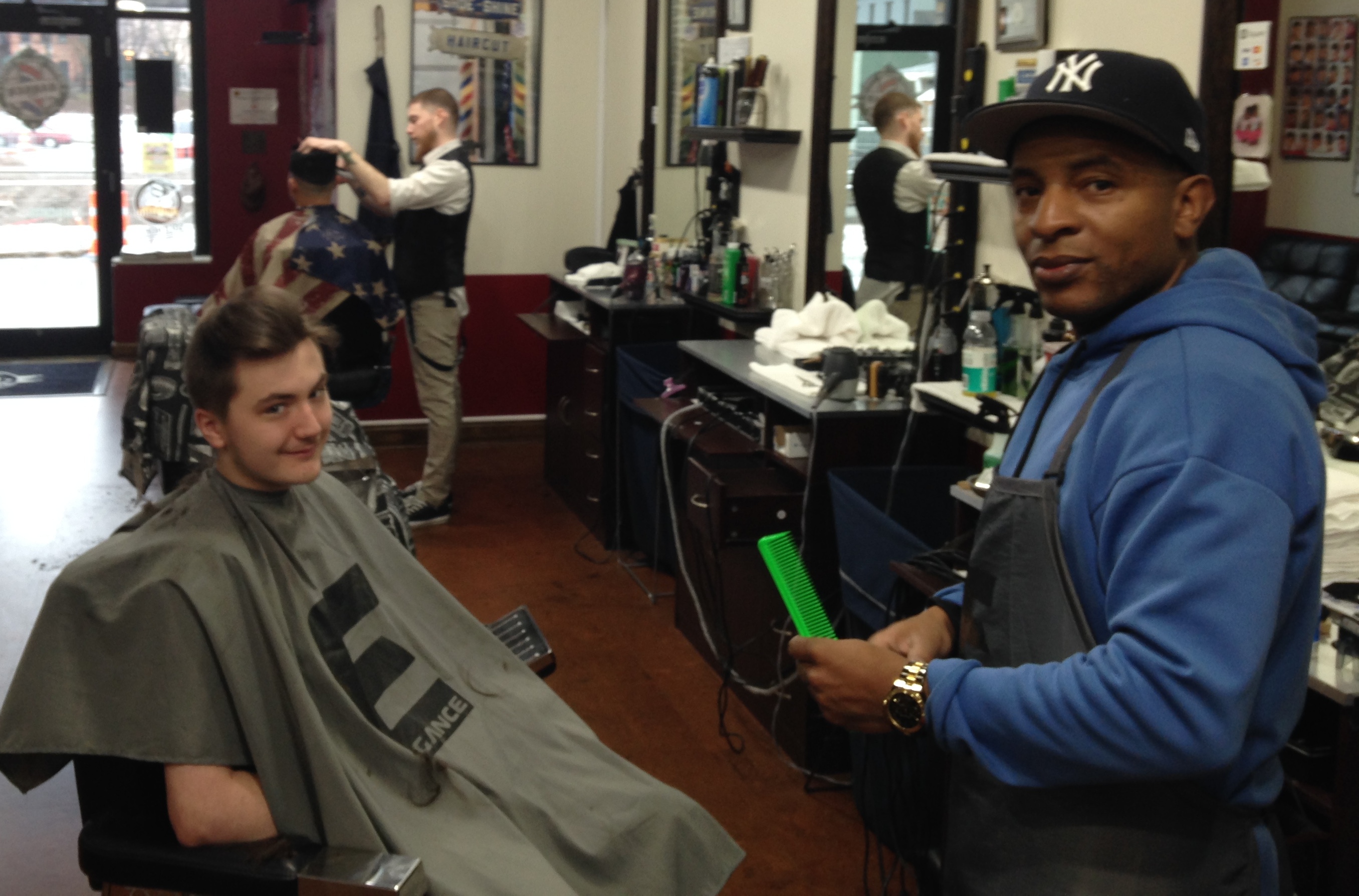 “As a result, in the past year we have done a variety of activities together, such as swimming at a relative’s pool, playing board games, playing tennis and ping-pong at the Y, attending a classical concert at Zankel Music center, bowling, visiting the Dance Flurry festival, getting a complimentary haircut at Henry Street Barber shop , going to Open Mic Storytelling and Open Mic Blues at Caffe Lena, and painting at the “Paint and Sip” studio… Damian and I were the only guys among the 25 Mentors and Mentees at this!” He said. 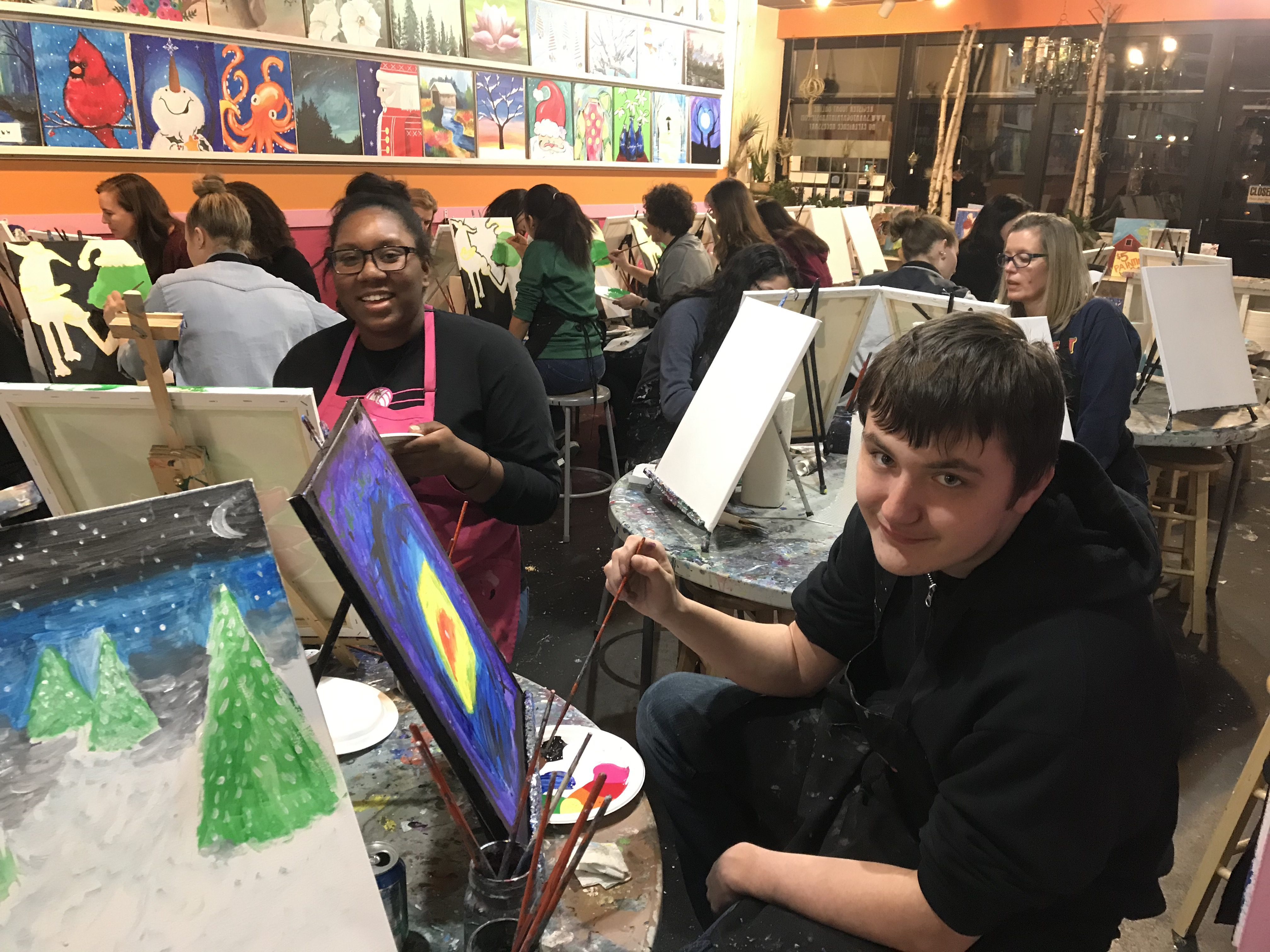 Yes, storytelling. Damian had mentioned that he had an interest “a hobby that might grow unto something more” in songwriting and singing, but according to Norbert (who by the way is a retired Mechanical Engineer,) it is storytelling that made Damian “light up the room!”

He goes further: “I invited Damian for his first visit to Open Mic Storytelling at Caffe Lena, where I had been telling my stories once a month for about 2 years. The format is to volunteer 15 minutes before the 7 pm start time, and then to present a 5-10 minutes story on any topic, without notes.

“You can imagine my surprise when Damian volunteered to tell a story that same day.” Norbert continued. “I tried to reassure him that there is really no pressure for him to do this, but he insisted! I was flabbergasted when he delivered a near perfect six-minute heartwarming story about the influence that his father and grandfather had on him…both passed away 5 years ago. The audience loved it!

“If that wasn’t enough, when I invited him again the following month, on November 27, to join me and my 17 year-old grandson Noah for Open Mic Storytelling, he volunteered to tell another story! His second story was another home run, where he told about his participation last spring in the BOCES USA Skills competition in the Extemporaneous Speech category, where the competitors are given a topic and 5 minutes to prepare a short speech. He talked about how he won the local competition, then won the regionals at Schenectady Community College, and thereby advanced to the State competition in Syracuse for a 3-day all expense paid trip, where he placed 6th out of 27 competitors. The audience again loved his relaxed manner and his overall poised performance.” Norbert concluded.

And thanks to Norbert’s Grandson, Noah, who was on hand to record this second story, you can judge for yourself. It’s about an eight minute audio recording, but certainly worth a listen. If you are interested, please email Norbert Hanus at nh1399@gmail.com and he will email you the audio file.

I once interviewed an accomplished stand-up improv performer and asked what the most important factor was in a successful show. She said “the ability to take measure of your audience, to feel them…”

In other words – empathy.

No matter how he applies it in life, be it engineering or on stage, it will be his ability to cultivate this rare quality that will enable Damian to excel. And there are many who are rooting for him to do just that.

Saratoga Sponsor-a-Scholar levels the economic playing field, allowing horizons to be broadened, and future leaders to emerge – regardless of financial circumstances. For more Scholarly information about how you can support these leaders of tomorrow, visit their WEBSITE.

Planet Arthur is proud to have SSAS as a sponsor.