SARATOGA SPRINGS – THE PHILADELPHIA ORCHESTRA’S three-week residency (July 31 – August 17) will be highlighted by 19 SPAC premieres ranging from classical masterpieces to innovative contemporary compositions, marking a record number of pieces that have never before been performed on SPAC’s stage. ““This summer we will present a record number of works that have never before been performed on SPAC’s stage,” said Elizabeth Sobol, president and CEO of SPAC. “From contemporary works like Mason Bates’ Anthology of Fantastic Zoology and popular film scores to surprising omissions of masterpieces long overdue for the SPAC stage like Mozart’s Requiem and Copland’s Appalachian Spring. The 2019 season concerts will offer an extraordinary depth of repertoire performed by artists of matchless talent, providing audiences that perfect confluence of natural setting and great performance that make summers at SPAC so unforgettable.”

Opening Night of The Philadelphia Orchestra’s August residency will continue the new tradition of featuring Tchaikovsky’s famed 1812 Overture, complete with fireworks and live cannon fire as the kick-off to the 2019 Orchestra season. New to the program for 2019, will be the SPAC premiere of dancers from the Philadelphia Dance Company (PHILADANCO).

Internationally acclaimed, PHILADANCO is celebrated for its innovation, creativity and preservation of predominantly African-American traditions in dance. Described as “Exuberant” by the New York Times, Philadanco has grown, since 1970, from a community arts organization based in West Philadelphia to a dance company celebrated throughout the world. Joan Myers Brown and her 17 dancers are famed for innovative choreography, blending African American-based dance with ballet, jazz, and modern.

The evening will be conducted by Stéphane Denève, who is currently in his fifth season as principal guest conductor of The Philadelphia Orchestra, a position that runs through the 2019-20 season. He has led more programs with the Orchestra than any other guest conductor since making his debut in 2007, in repertoire that has spanned more than 100 works, ranging from Classical through the contemporary, including presentations with dance, theater, film, and cirque performers.

Leopold Stokowski, known for his long tenure as music director of The Philadelphia Orchestra, was a cultural pioneer, bringing the latest in art and music to Philadelphia during the first half of the 20th century and presenting it in bold, new ways – most notably his incredible orchestrations of famous works by such composers as Giovanni Pierluigi da Pergolesi and Johann Sebastian Bach.

This robust program features Bach’s Toccata and Fugue in D minor, which has become a vastly popular piece, especially in the horror genre, and has been prevalent in pop culture since well before the sound film era. Although a great masterwork in the classical cannon, Bach’s Toccata and Fugue in D minor saw renewed popularity from an orchestration by Stokowski that he and The Philadelphia Orchestra performed in the 1940 animated film Fantasia.

A native of Indonesia and a Young Scholar of Lang Lang’s International Music Foundation, pianist Janice Carissa will make her SPAC debut performing Ravel’s Piano Concerto in G major on August 2. Also highlighting the evening under the baton of Stéphane Denève are the “Four Sea Interludes” from Britten’s opera Peter Grimes and Debussy’s “The Sunken Cathedral,” both appearing at SPAC for the first time.

Debussy’s musical innovations became closely associated with the Impressionist movement, a term that was initially used pejoratively in connection with Claude Monet’s paintings. Many of Debussy’s pieces were inspired by images and by nature. As he once remarked: “I am trying in some way to do ‘something different’—an effect of reality—what some imbeciles call ‘Impressionism,’ a term that is utterly misapplied, especially by the critics.” In La Mer he offers three meditations on the sea: “From Dawn to Midday at Sea,” “Play of the Waves,” and “Dialogue of the Wind and the Sea.”

SATURDAY, AUGUST 3 @ 8PM: Harry Potter and the Chamber of Secrets™ in Concert

Williams Harry Potter and the Chamber of Secrets™ (complete with film)* 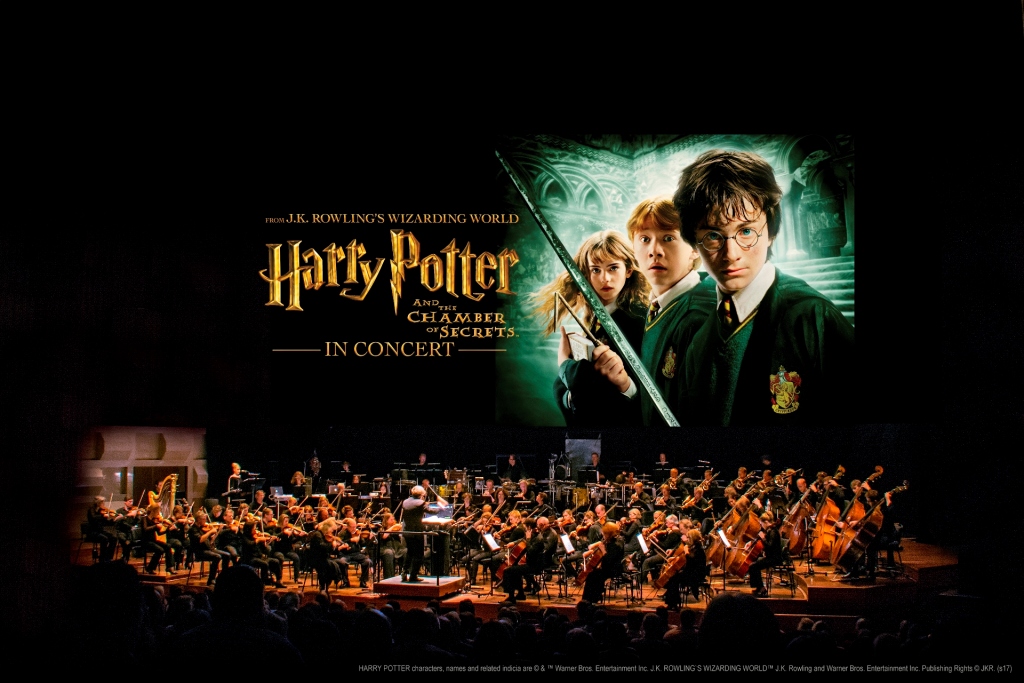 The concert will feature The Philadelphia Orchestra performing, live to picture, every note from Harry Potter and the Chamber of Secrets™, the second installment of the popular series. Audiences will be able to relive the magic of the film in high-definition projected on the big screen while hearing the live symphony orchestra perform John Williams’ Grammy-nominated score.

In Harry Potter and the Chamber of Secrets™, based on J.K. Rowling’s novel, cars fly, trees fight back and a mysterious house-elf comes to warn Harry Potter at the start of his second year at Hogwarts. Adventure and danger await when bloody writing on a wall announces: The Chamber of Secrets has been opened. To save Hogwarts will require all of Harry, Ron and Hermione’s magical abilities and courage. 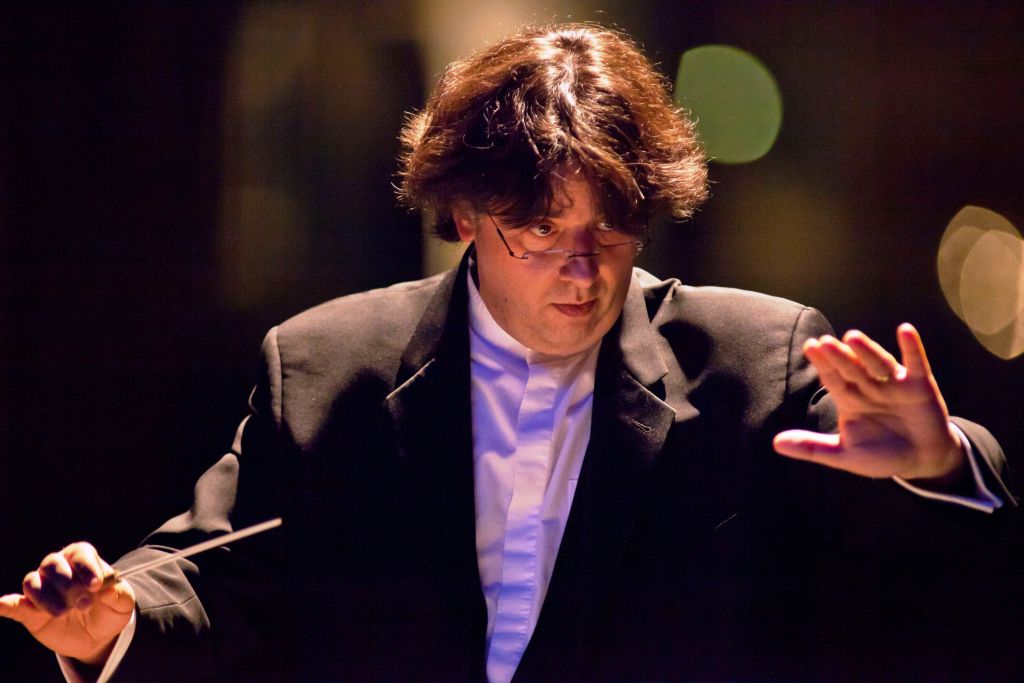 Masquerade “draws its inspiration from the original mid-18th-century promenade concerts held in London’s pleasure gardens” according to composer Anna Clyne and was dedicated to the Proms’ concertgoers for which this piece originally premiered. This richly orchestrated work includes an old English country dance melody and a drinking song to add a festive flair to the program.

Chausson’s Poème de l’amour et de la mer, which translates to Poem of Love and the Sea, is a 19th-century song cycle about love, loss and the sea. This program, marking the return of Yannick Nézet-Séguin to SPAC’s podium, celebrates the interplay between the romantic texts of Maurice Bouchor and Chausson’s lush orchestration. According to Yannick, “This is just an amazing collection of poems and it got me thinking how color in symphonic music can be … a way of getting to a true soul of a piece.”

Closing the evening is Rachmaninoff’s Symphony No. 1.

August 8 will feature three SPAC premieres: blue cathedral, an orchestral composition by the American composer Jennifer Higdon and one of the composer’s most performed works; the orchestral suite from Copland’s Appalachian Spring, the Pulitzer Prize-winning depiction of the American idyll, which also popularized the Shaker folk song “Simple Gifts”; and Mason Bates’ Anthology of Fantastic Zoology, titled after mythical creatures from the book of the same name by Argentinian literary giant Jorge Luis Borges. The work exploits the virtuosity of the Orchestra to evoke what the composer calls a “psychedelic bestiary.”

Fountains of Rome, the piece that eventually put Respighi on the international map, celebrates four of the city’s famous fountains as a highlight of this aquatic-themed program.

Under the baton of Peruvian conductor Miguel Harth-Bedoya, making his first-ever SPAC appearance, this program will transport listeners to South America with three SPAC premieres that explore the sounds of Argentina and Peru.

The effervescent Harp Concerto by the celebrated Argentinian composer Alberto Ginastera was premiered by The Philadelphia Orchestra in 1965 and is today performed by the current principal harp, Elizabeth Hainen, considered one of classical music’s great harp ambassadors. Hailed by the Washington Post for her “unusual presence with silky transparency” and by the New York Times for her “earthy solidarity,” she has thrilled audiences throughout the world with programs showcasing the diversity—and virtuosity—of her modern-day instrument.

The allure of tangos and other dance-inflected rhythms merge in Piazzolla’s sultry music with his sophisticated compositional training in Paris, where he went at the urging of Ginastera. Tangazo is one of Piazzolla’s late compositions, which he originally wrote for a small ensemble and then arranged for full orchestra. The concert concludes with Perú negro by the young Peruvian composer Jimmy López. A celebration of AfroPeruvian traditions, the work honors López’s compatriot, this concert’s conductor, Miguel Harth-Bedoya, by using a four-note theme based on his initials.


Giacchino Up (complete with film)* 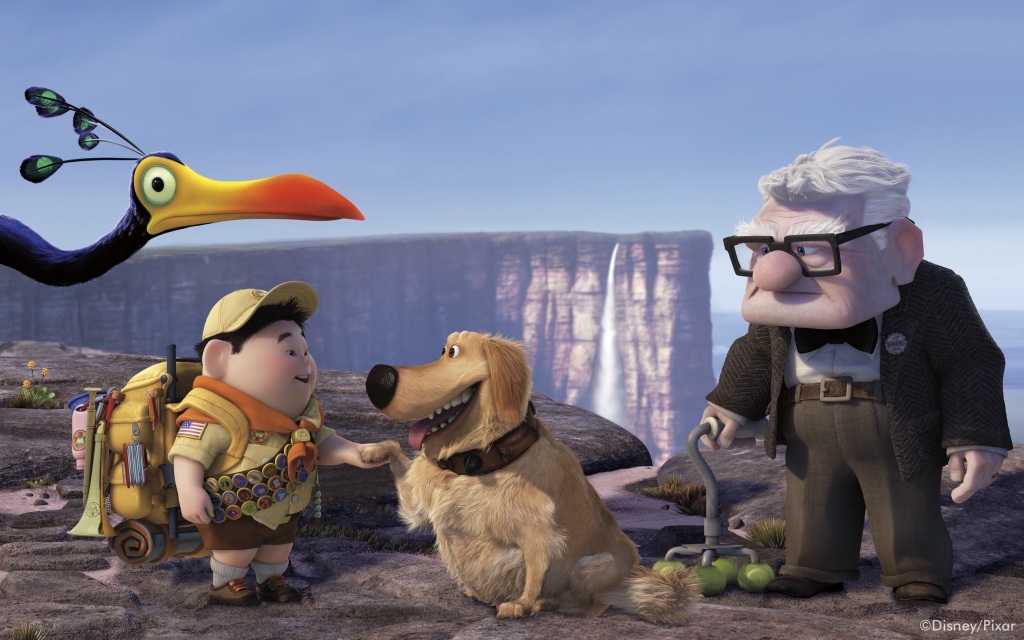 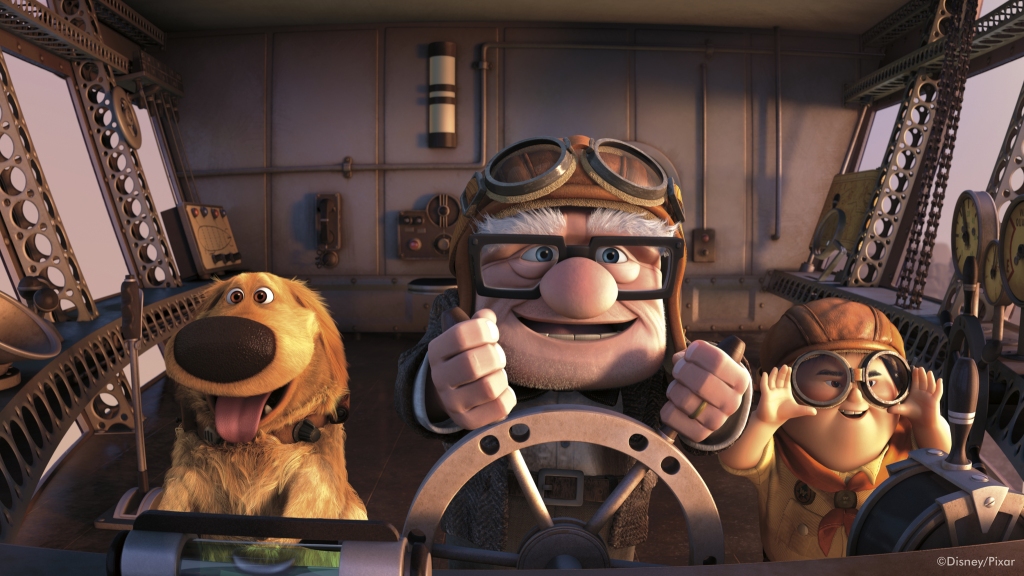 Making its SPAC premiere as part of the film’s 10th anniversary, Disney • Pixar’s Up in Concert will be screened alongside The Philadelphia Orchestra performing its Academy® and Grammy® Award-winning score, live to picture as the second film in the popular “Cinema Series at SPAC.”

The Academy Award-winning film features a 78-year-old curmudgeonly balloon salesman named Carl as its hero. When he ties thousands of balloons to his house and flies away to the wilds of South America, he finally fulfills his lifelong dream of adventure. But after Carl discovers an 8-year-old stowaway named Russell, this unlikely duo soon finds themselves on a hilarious journey in a lost world filled with danger and surprises.

Charlie Chaplin’s immortal romantic comedy City Lights gets even brighter when The Philadelphia Orchestra performs Chaplin’s score live while the complete film — considered to be among the greatest ever made — is shown on a giant screen above the stage for the final installment of the “Cinema Series @ SPAC.”

Charlie Chaplin, one of the towering icons of film history, central to the field of film as a producer, director, and actor, is instantly recognizable to people around the world for his signature character, the Tramp. In 1999, the American Film Institute placed him on its list as one of the “greatest male movie stars of all time”; it also acknowledged his film City Lights as one the “100 best American films ever made.”

Chaplin, unlike most directors in the silent film era, composed the music for City Lights: “I tried to compose elegant and romantic music to frame my comedies in contrast to the tramp character, for elegant music gave my comedies an emotional dimension. Musical arrangers rarely understood this. They wanted the music to be funny. But I would explain that I wanted no competition, I wanted the music to be a counterpoint of grace and charm, to express sentiment, without which, a work of art is incomplete.” 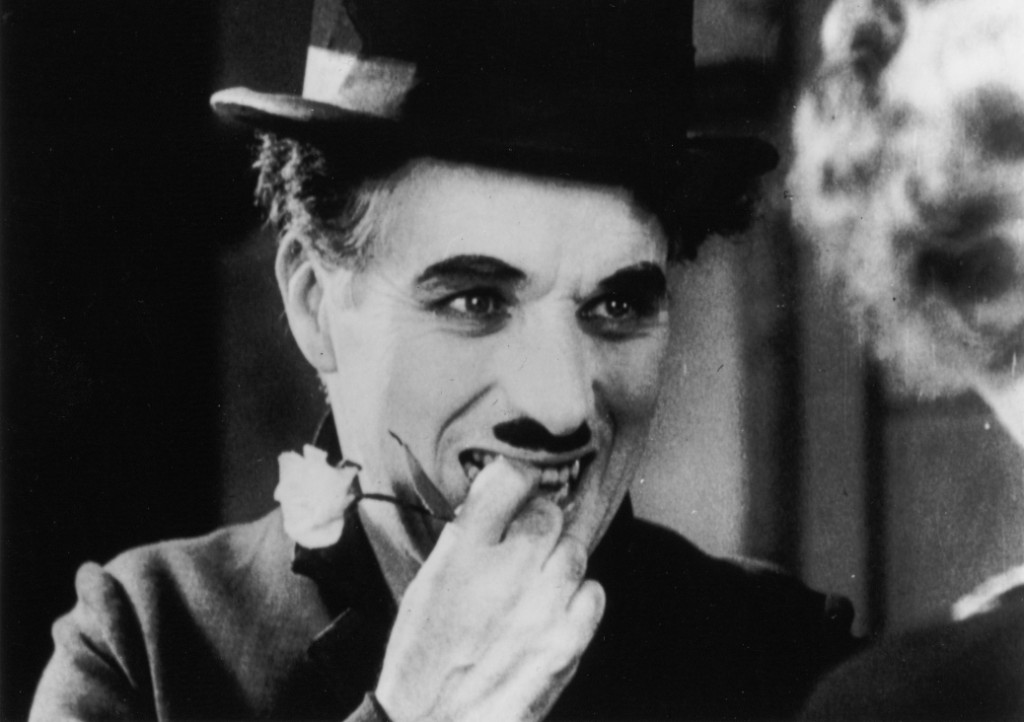 Commissioned by the Berliner Philharmoniker Foundation, Swing Symphony is Marsalis’s third symphonic work, which he describes as a symphonic meditation on the evolution of swing. Swing Symphony will feature both JLCO and The Philadelphia Orchestra, following an opening piece by Jazz at Lincoln Center Orchestra.


Wagner Prelude to Act I of Lohengrin*
Grieg Piano Concerto
Dvořák Symphony No. 7

Making his SPAC debut is 23-year-old Canadian pianist Jan Lisiecki, who has won acclaim for his extraordinary interpretive maturity, distinctive sound, and poetic sensibility. The New York Times has called him “a pianist who makes every note count.” Lisiecki’s insightful interpretations, refined technique, and natural affinity for art give him a musical voice that belies his age. He will perform Grieg’s Piano Concerto, marking the first time that the piece has been played on SPAC’s stage in more than a decade.

Under the baton of Yannick Nézet-Séguin, the program will also feature Dvořák’s impassioned Symphony No.7, considered one of his towering achievements, and Wagner’s Prelude to Act I of Lohengrin.

Mozart’s haunting Requiem came at the very end of his life: He died before he could finish it. A choral masterpiece featuring four renowned vocalists and the powerful forces of the Albany Pro Musica, it is considered one of the greatest expressions of faith ever cast as a work of art. Yannick Nézet-Séguin, Music Director of The Philadelphia Orchestra and the new Music Director of the Metropolitan Opera, will lead the Orchestra as the finale to the classical season on the amphitheater stage.

Making his Philadelphia Orchestra debut on SPAC’s stage for the finale performance is pianist Christian Blackshaw, celebrated for his recordings of Mozart and called the “eternal perfectionist’ by Gramophone magazine.