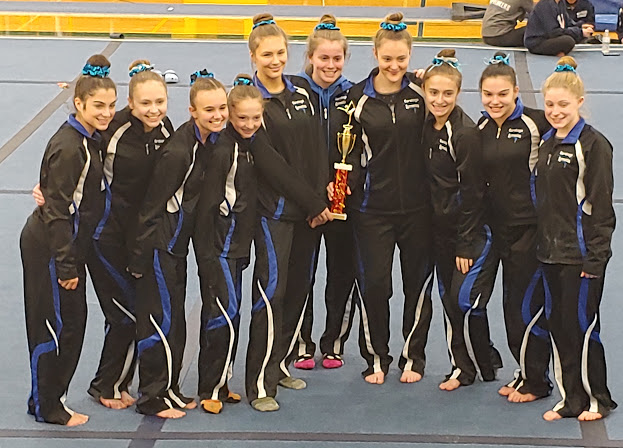 SARATOGA SPRINGS – In basketball circles, they say that defense travels. For the Saratoga Springs High School gymnastics team, it was their performance on the beam and the floor exercise that did the traveling on Saturday, February 2nd, as they competed in the Kate Filiberti Memorial Invitational against host Franklin Delano Roosevelt (Section IX), Wappinger Falls (Section IX) and Mahopac (Section I). Toga gymnasts, as a team, outscored their nearest competitor on the beam by 2.95 points and on the floor exercise by 2.375 points en route to a convincing win with 167.425 points followed by Mahopac (161.400), FDR (153.025) and Wappinger Falls (150.550).

Leading the way for Saratoga was sophomore Ava Dallas, who won the all-around competition with a score of 35.65 and senior Laura Eberlein who was fourth in the all-around (33.15). Dallas also captured the top spot in the floor exercise (9.4), the beam (9.125) and the vault (9.425). Her vault score set a new Section 2 record besting the previous mark of 9.400 which Dallas set last season as a freshman.

“Coach has been stressing all season getting maximum extension on the vault table,” Dallas said of head coach Deb Smarro. “I coupled that advice with something Nadia pointed out a few weeks ago with respect to my run-up and put it all together today.” The “Nadia” Dallas alludes to is five-time Olympic gold medalist Nadia Comaneci who spent over an hour with the Saratoga Springs High School gymnastics team on January 23rd while she was in town promoting this summer’s Aurora Games in Albany. “Nadia really underscored the importance of a powerful run-up to the vault to get maximum lift and distance. You can’t be tentative and just have to attack it. I really focused on that today and was really happy to break my own Section 2 record. I think I can score a few tenths higher if I can stick the landing”


Dallas and her Saratoga teammates are perfecting their routines for the upcoming Section 2 championships being held on Wednesday, February 13th at Shaker High School followed by the New York State Gymnastics Championships for those that qualify on March 2nd at Cold Spring Harbor High School on Long Island.