Visit Saratoga.com For Everything Saratoga
Enter Giveaways Advertise
Note: Saratoga.com is not responsible for posts and comments written by non-staff members.
Home  »  Building  »  Living Off the Grid – A Local Love Affair 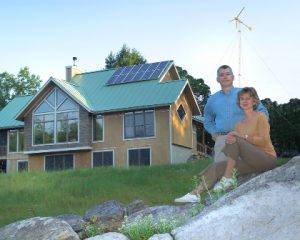 This time of year, more than ever, there’s probably not one among us that hasn’t imagined being off the grid… not having to worry about the cost of heating our home throughout the winter chill. Tucked away in the middle of 80 acres on the borders of Greenfield Center and Corinth, photographer Tom Stock and his wife, Roberta, are living just that life. 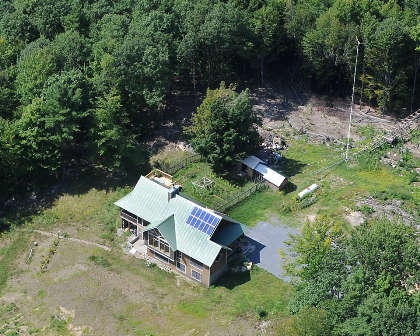 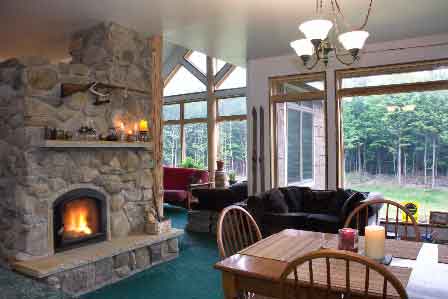 During the ice storm that hit our area hard in December, while most
of us were facing days without power or fear every time the lights
flickered, the Stocks were safely tucked in into their home, not aware
that everyone around them was powerless and not concerned that their
power lines might be clipped by a falling branch.

The idea for
their self-sufficient home began several years ago when they were
looking to combine their households. Both resided in Saratoga Springs,
and instead of moving one into the other’s home, they wanted to start
fresh. While they could have bought an existing residence, Stock has
always been interested in living out in the country which would be a
perfect complement for his work. Because of this they began to look for
land.

Originally intent on finding a 20-acre parcel, they had
difficulty locating exactly what they were looking for. Ultimately,
they ended up falling in love with the 80-acre keyhole plot. With only
60 feet of road frontage and a long and winding driveway leading to
their property, and the nearest power line at one mile away, their new
land was ideal for creating a completely self-sufficient home.

After
much research on alternative energy and educating themselves, they
settled on three complementary systems: a passive solar system which
both powers and heats the home, a wind turbine and a backup propane
generator. The three systems work hand-in-hand to assure they are never
without power. The solar panels and windmill give them the ability to
charge their battery cells via two methods and if it’s cloudy and still
for too long, the generator kicks in on its own. However they note,
fortunately that happens rarely, if ever.

Since they moved
into the home, on Valentine’s Day 2005, they have not once had a
problem, power outage or heating issue. And having lived in it in the
day-to-day, they admit, there is nothing they would change about their
setup.

When it came down to construction, it truly was a labor
of love for both of them. Instead of relying on someone to fulfill
their vision, they took the concept and worked on the design
themselves. Seeing the home as somewhere they knew would never leave,
they built for the future as well. Everything they need is on the main
level and all the entrances and doorways are handicapped accessible.

Before
construction even began, they had to clear a large area in the wooded
property to make room for the home and to allow access to the sun for
the solar panels and give the turbine the room it needed. To undertake
the challenge, the Stocks had several tree-clearing parties, offering
friends and family all the wood they could take and use for the added
man power to help with the project.

While Stock was on hand almost every day and was involved in
every facet of the home’s construction, they subcontracted out much of
the work and actual implementation. Subcontracting proved to have its
own challenges however, as they found themselves having to educate many
of their subcontractors.

When it came time to get an engineer
involved, they found that they had to hold fast on the orientation of
the home while he was determined to give them what he considered the
best view. The Stocks continually had to explain that the orientation
had to be exact for the house to function properly. If the solar panels
and the main bank of windows was not facing due south, they would lose
out on the home’s efficiency. As they went on, they found they
regularly were sharing the knowledge they had gained with those working
on their home that had never taken on such a project before.

The
home is not just the wind turbine, solar panels and generator however,
at least when it comes to heating. With the majority of its windows
facing south, the home benefits from optimum sun intake. The dark slate
floors absorb the sunlight throughout the day, allowing them to radiate
the heat throughout the day.

During the construction phase,
Stock used Structural Insulation Panels (SIPs) and caulking to help
with the homes heating efficiency. This heavy insulation effectively
seals off the home, keeping it free of all drafts and leaves it feeling
comfortable no matter the temperature. According to Roberta, between 62
and 66 degrees, the house can easily feel more comfortable than a
drafty home at 70 degrees. The insulation also serves to keep the house
cool during the summer. Instead of turning to an air conditioning unit,
the Stocks’ home remains comfortable during the summer sun, even with
the wide bank of windows thanks to the insulating job.

A major
feature of the main living space is the gorgeous masonry heater that
fills the kitchen and living room. The heater is faced with field
stones from around the property. Using the stones from the property
tied the stove into a concept Stock very much wanted to follow in the
construction of their home… bringing the surrounding nature and their
environment to the indoors, essentially tying the two together. This
concept can also be found as structural features throughout the home in
stock utilized trees that had been cut down to make room for the
homestead as stair bannisters and structural posts.

The 3-ton masonry heater, which Stock built himself, from a kit,
is highly efficient. The fire only needs to burn for two hours and once
it goes out, the stove’s large surface will continue to radiate heat
for up to 9 hours. The stove’s high efficiency is seen most strongly in
its wood consumption. Using the stove once a day for an entire season,
the Stocks only used approximately 1.5 cords of wood, whereas a normal
wood stove would go through 10 or more.

While they note that
their setup would not be ideal for a larger family or consumes energy
at a higher rate, it is perfect for them and keeps the cognizant of how
much power they consume on a regular basis. Having the ability to see
how much electricity they are using and how their battery charge is
holding up, they find they are much more aware of how much energy they
consume.

To conserve and otherwise save energy, they are
regularly in the habit of reducing their phantom loads. These phantom
loads, the ones that continually draw from your energy supply whether
they are in use or not, contribute for a lot of what the rest of us get
charged for regularly.

Things like cell phone chargers,
televisions, computers, stereo systems and microwaves regularly draw
energy even when not in use. Because of this, the Stocks have placed
all these items on power strips that have on/off switches and can be
shut off when not in use, saving them the regular draw.

This
lifestyle also carries over to their commute as well. When they were
living in town, Stock drove a Ford Explorer and thought nothing of his
few mile commute or having to run to the store to buy something.
However, now that his commute is much longer, he decided it was time to
find a more fuel-efficient vehicle to take the trip daily. These days,
the Stocks commute into Saratoga together and Roberta leaves her car at
her office for around town errands. They have also found that living
away from stores, they are forced to plan their trips around and to
town more thoroughly.

Looking back at when they started the
project, the energy crisis wasn’t the hot topic it was these days and
they find it interesting that now that we’ve begun to see gas and
energy prices rise, that people assume that the work they’ve done was
in response to the current situation. Indeed they were ahead of the
curve when they began planning, but now that we have found ourselves in
the situation we’re in, they are certainly thankful they had the
foresight.