Visit Saratoga.com For Everything Saratoga
Enter Giveaways Advertise
Note: Saratoga.com is not responsible for posts and comments written by non-staff members.
Home  »  Broadway  »  I Walked a Zillion Miles 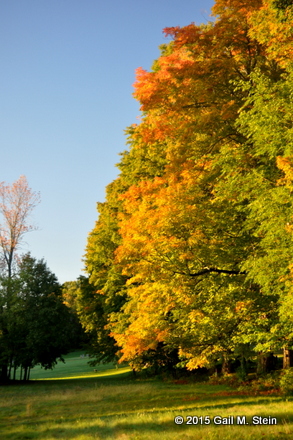 Well, I will say it once again. I am so glad I am a morning person! And I was thrilled this weekend (as was everyone else) to have had such a picture perfect couple of days presented to me. There was so much I wanted to do. Actually, there was a lot I NEEDED to do before I travel to Holland late next week to visit my brother, but this perfect autumn weekend precluded any of the “should do’s.” 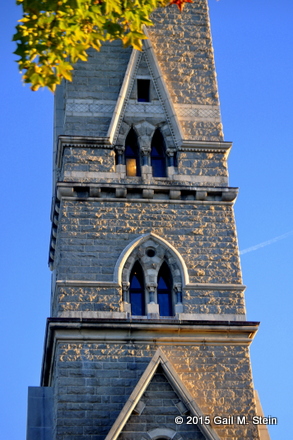 I woke up at 4am on Saturday morning. This was not by choice, and I was not at all happy about it. I have no idea why I woke up so early, nor did I have an explanation as to why I absolutely could not fall back to sleep. My mind was racing with thoughts of all the things I wanted to do with the gorgeous foliage and warm sunshine, which were warring with the more sensible side of my brain that was trying NOT to think about all the things I should be doing. I finally gave up and got out of bed. It was 4:10 a.m. 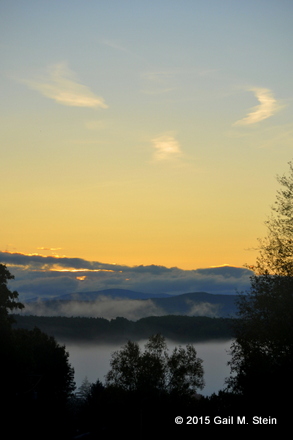 By 6:15, I had decided I was going to go to the Saratoga Monument to see what the sunrise was going to look like. I thought it might be pretty coming up over the mountains in the distance, and I headed out. It was FORTY degrees out there! Yikes. 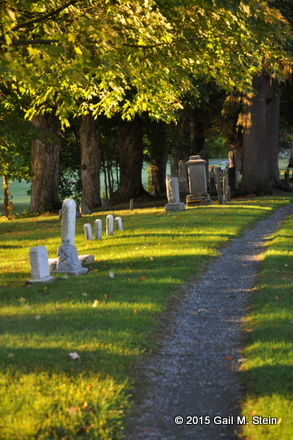 I got to the monument in plenty of time to see the sun come up and, while the sky was not spectacularly pink or orange like so many other mornings, there was a dramatic fog hanging low over the mountains which made for an even more interesting scene. I ran through a field of dew-soaked grass and weeds to get a different view, and wound up shivering with sopping wet sneakers and jeans from about the knees down. I was so cold! My feet were numb, and my fingers were barely able to manage the controls on the camera. And I had downed a Dunkin’ Donuts large coffee on the way over, so I really needed a restroom. 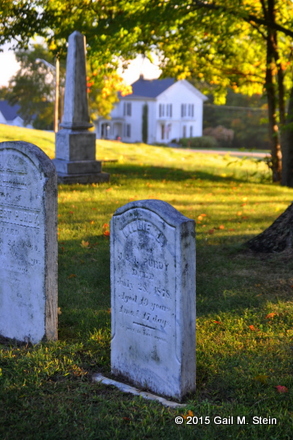 But I got several good shots so it was all worth it. A beautiful and dramatic sunrise, followed by an hour of walking through the cemetary, taking advantage of the great angle of the sun illuminating the headstones, and making the foliage literally glow. And warming up the air. Thankfully. 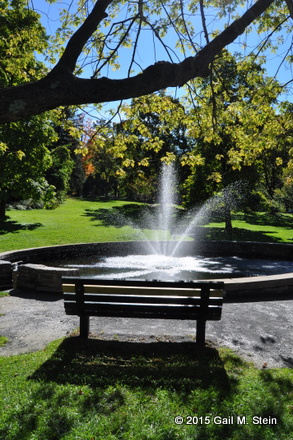 A little while later, I headed downtown. The Saratoga International Flavor Feast was going on and I could hear the music and see all the people, and it looked like so much fun, but I have given up sugar in an attempt to lose weight (and, PS, that whole no-sugar thing really works). I figured I was better off staying away from all the food, so I headed to Congress Park. 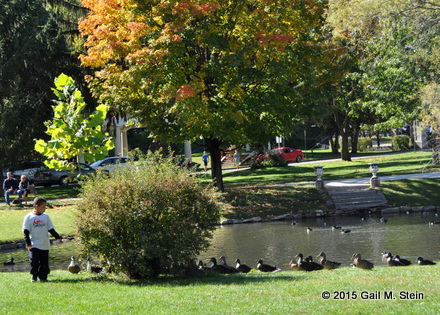 It was filled with people…lots of families and kids, couples, photographers, and groups of friends. And why not? The weather could not possibly have been any nicer. I decided to spend the entire afternoon walking around the city taking photos of anything that caught my eye.

From the park, I headed up Broadway. Way up North Broadway. So many people were strolling the sidewalks, looking at the beautiful scenery and foliage, with many of them stopping to photograph the Riggi’s Halloween display.

I love looking at all the beautiful homes and, most especially, the flowers, pumpkins, mums and landscaping at each address. 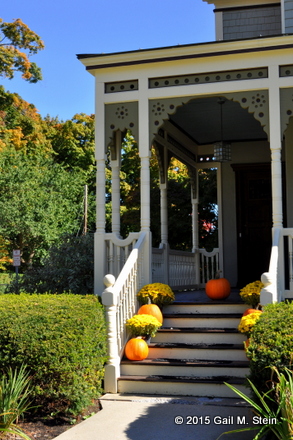 I turned back and headed toward town again, and spent the next two hours aimlessly walking the west side, up and down the streets, exploring, examining, and taking photos. And I talked to so many people! It’s pretty much a given that, if you are out walking a dog, I will stop to pet and play with your dog, and we will talk and talk and talk. 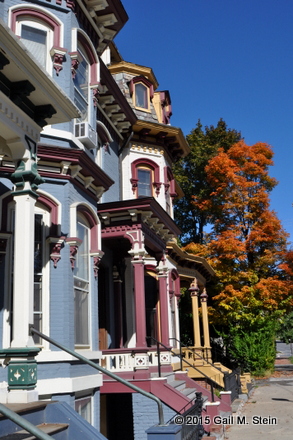 I did spend a lot of time on both Clinton and Beekman Streets. Both are so pretty! 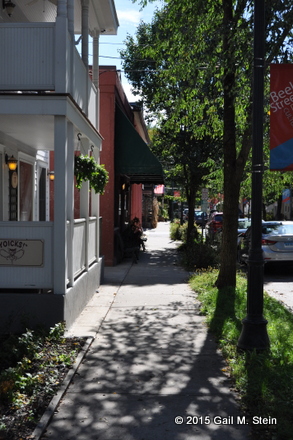 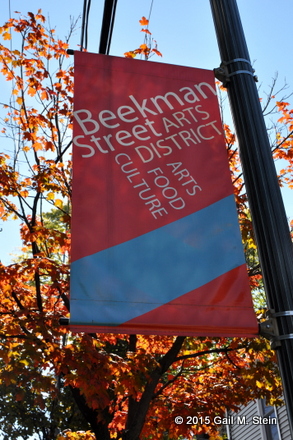 When it finally felt like I couldn’t take one more step, I returned to my car. My plan was to go home as I had plans to go out that evening and I wanted to rest, but then I got it in my head that Yaddo would probably be pretty gorgeous too, so I headed over there before going home.

I was right. It was, of course, GORGEOUS. And mobbed. I’ve never seen it so crowded, and there appeared to be at least a couple of tours going on. I had no interest that day in the gardens or the pergola, although I did wander through that area, but I really wanted to photograph the reflections of the trees on the water, so I eventually walked away from the crowds into the peace and quiet of the woods. 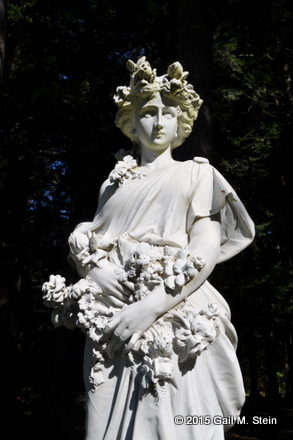 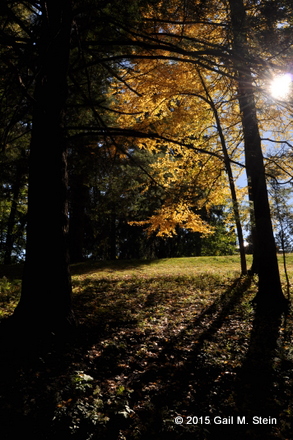 Before leaving, I did get this shot of one of the few remaining roses. I liked how it was just hanging there, but still so alive. 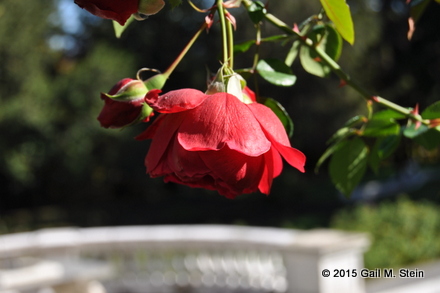 So, I think I walked about 47 miles on Saturday…at least that’s what my legs were telling me, but I wouldn’t have changed a minute of that day. It was perfect.
And on Sunday, I headed north with some friends to Gore for the Harvest Fest., but that’s a whole other story.