Visit Saratoga.com For Everything Saratoga
Enter Giveaways Advertise
Note: Saratoga.com is not responsible for posts and comments written by non-staff members.
Home  »  Broadway  »  What a Night…Victorian Street Walk 2015 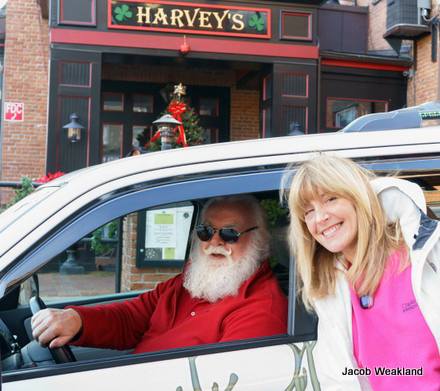 Well, as anyone who attended knows, this year’s Victorian Street Walk was a huge success. The rain we had experienced earlier in the day had disappeared, and temps were warmer than average. Crowds came out in full force…families, friends, co-workers…everyone was out enjoying the music of the carolers, choirs, and other performers; shopping in the gaily decorated stores, and munching on the kettle corn being sold in front of the Downtowner and filling the air with that intoxicating smell. It really was a special night. My only regret was that, due to the fact that I still struggle with the nighttime settings on my camera (and, let’s be honest here, I eventually gave up and just switched to automatic…shhhh), the crowds were so thick and constantly moving, and I was trying desperately to take photos AND not lose my friends in the crowd, most of my photos did not come out well at all. Lots and lots of blurry shots, or images with random heads and bodies that walked into or through the shot as I was taking it…well, you get the picture. I will share some of them here, the few that are either good, or even moderately close to good. But keep your expectations pretty low…
But, first, let’s back up a bit. Earlier in the afternoon, I MET SANTA!! Yes, that’s right, the man himself was parked right on Phila Street in his spiffy wheels (I guess he can’t always be flying that sleigh). I had just left Impressions (http://www.impressionssaratoga.com/) who had just agreed to carry my 2016 Frozen Moments In and Around Saratoga calendar, and was feeling pretty good about it. Not feeling pretty good, feeling pretty great, actually. 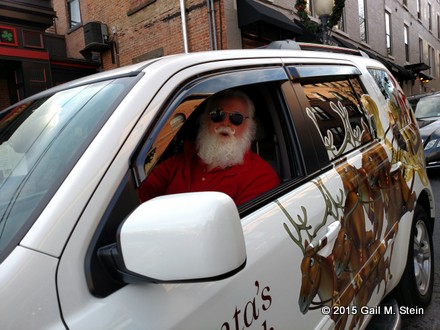 Before I continue, I should mention that I have certain words that I just love. I love to use them, love to hear them, love to see them. My favorite of all those words is ‘Believe.’ There are so many ways that word can be used and applied, most especially at Christmas. Anyway, I left Impressions and turned the corner onto Phila Street and, as I looked up, the first thing I saw was a HUGE ‘Believe’ on the back of a parked car. Just sprawled across the rear window! Even as I was whipping out my phone to take a photo (no camera with me, darn!), I was realizing that it was Santa’s car. I raced up to the car and started snapping away, yelling as I did so, “Santa? Are you in there??” He was! And check out that license plate…MC is for Merry Christmas! 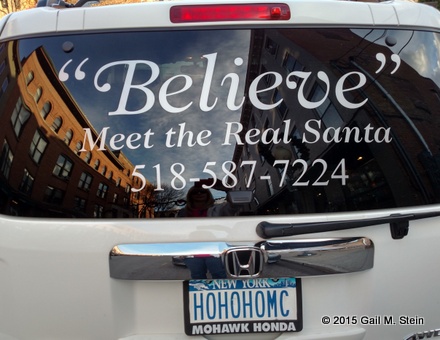 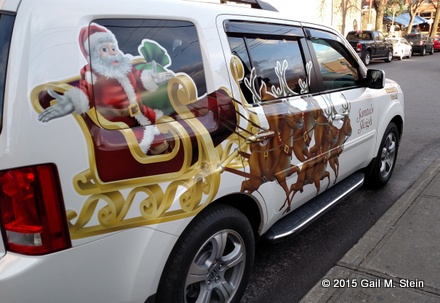 Turns out the big guy was going to be spending some time at Harvey’s, checking out who was naughty or nice, and we had a very fun conversation out in the street. There was another person there visiting with Santa before me, another Saratoga photo enthusiast by the name of Jacob Weakland, who had his camera out and was taking photos when I got there. He got the great shot of me at the top of this post, as well as the following shots of Santa later on, and very kindly agreed to share them with me here. How awesome are these?? Thanks so much, Jacob, for allowing me to use your photos. 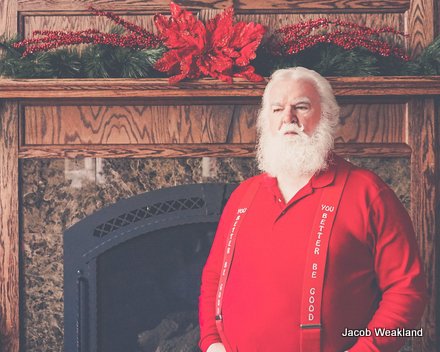 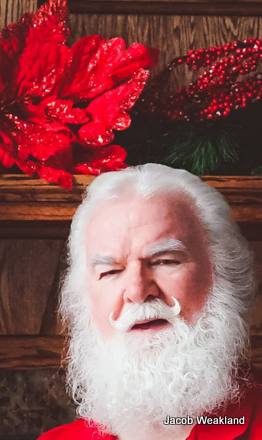 OK, back to the Street Walk… 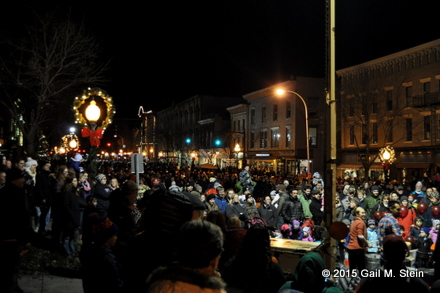 There’s not really much else to say, so I will just go ahead and share the pics that I can find that are not completely blurry or way too dark (and there really are only a few). My only regrets are that we never made it over to the City Center to see the Festival of Trees…and we missed out on Garland Nelson who was performing at the Diamond Grill at the Embassy Suites. Otherwise, a perfect night out with wonderful friends, meeting up with so many people we knew, and enjoying all the beauty that is Saratoga at Christmas! 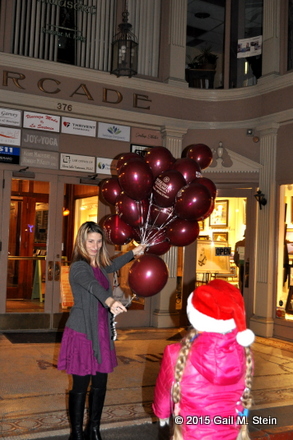 I really loved the window displays with the beautiful live models. They were all stunning and did such a great job. They definitely drew the crowd’s attention. I kind of just had to shove my camera in between all the spectators to even attempt to get a shot! 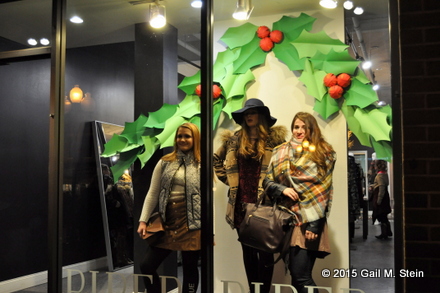 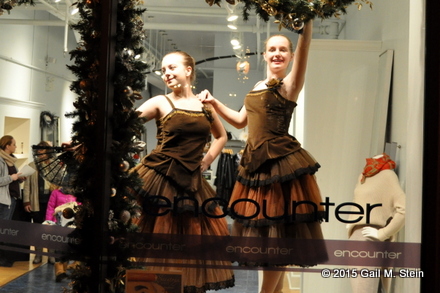 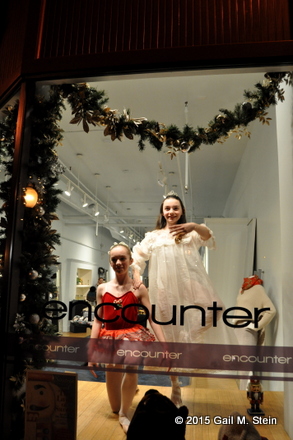 They were selling samples and cups of Pumpkin Pie Chai tea in front of Saratoga Tea & Honey. Could be a new favorite for me, it was exceptional! 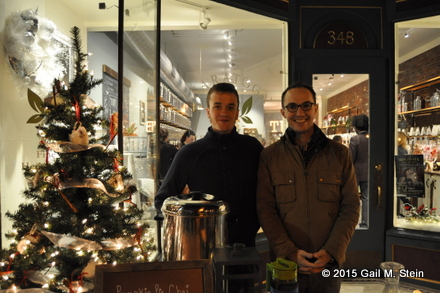 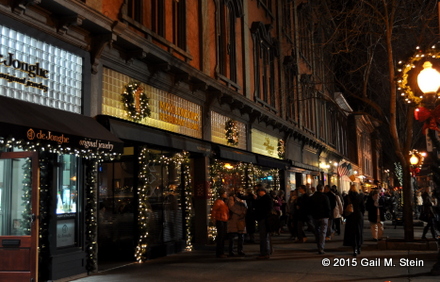 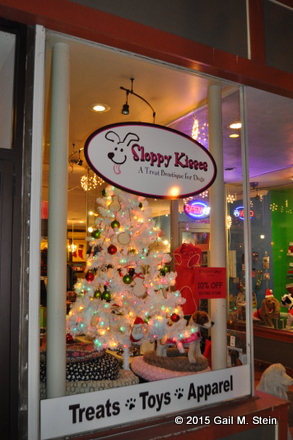 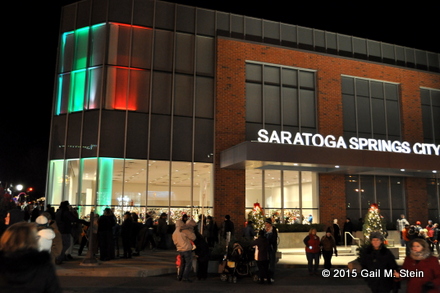 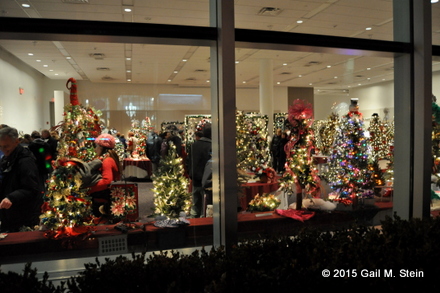 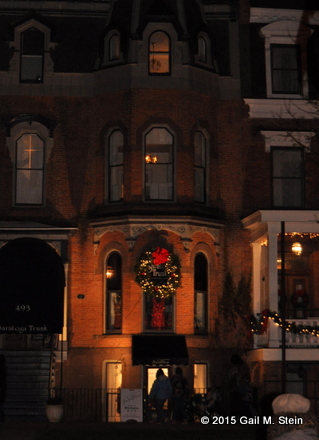 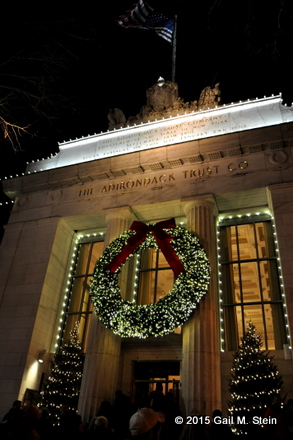 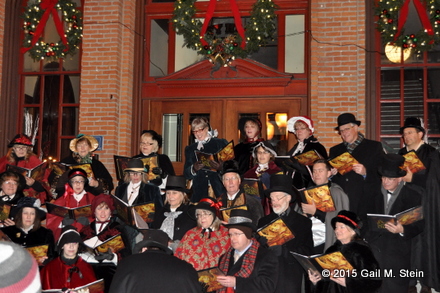 I hope everyone is enjoying the season and all it’s magic.