Visit Saratoga.com For Everything Saratoga
Enter Giveaways Advertise
Note: Saratoga.com is not responsible for posts and comments written by non-staff members.
Home  »  Healthy Thinking  »  Three Reasons to Groove on Grapefruit Oil for a Fitter and More Fabulous New Year 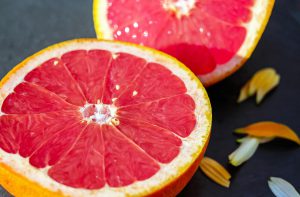 In my latest article, Ode, Scold, and Behold the Power of Grapefruit and The Difference Between the Fruit and Oil, I discussed all the benefits of this fruit and the downside of its “dark side.” Specifically, this citrus powerhouse is known to interact with more than 85 medications, and 43 can be pretty severe.1

However, this safety scare that has turned one of America’s most beloved breakfast fruits into the “forbidden fruit” is barely a concern for the essential oil. In the article, I review the evidence on how the constituent (furanocoumarins) responsible for the dangerous interaction is barely perceptible in the oil. Finally, I provide an overview of all the possible uses of citrus oils, highlighting grapefruit.

In this blog, I will share some more studies that prove the “groovy-ness” of grapefruit oil and redeem the fruit’s good name.

According to the American Journal of Plant Sciences, several compounds found in citrus peels make the oil rich in antioxidants and effective immune defenders:

There are several reports on the essential oil composition of citrus peels, some of which includes; D-limonene, β-Myrcene, α-pinene, β-pinene, γ-terpinene, α-terpinolene, α-Caryophyllene, copaene, β-phellandrene etc. [5,11-14]. Citrus fruits peels are also known to contain some antioxidants; flavonoids such as hesperidine, narirutin, naringin and eriocitrin, and also polyphenols such as caffeic acid, p-coumaric acid, ferulic acid and sinapinic acid [8,15-17]. The antimicrobial roles of flavonoids are well documented [18].2

In a 2009 study, researchers sought to determine the microbe-inhibiting effect of several essential oils, including grapefruit oil, on common hospital acquired bacterial and yeast infections. The oils were tested against several controls. The authors concluded, “Remarkably, almost all tested oils demonstrated efficacy against hospital-acquired isolates and reference strains, whereas Olive and Paraffin oil from the control group produced no inhibition. As proven in vitro, essential oils represent a cheap and effective antiseptic topical treatment option even for antibiotic-resistant strains as MRSA and antimycotic-resistant Candida species.” 3

Previously, I wrote on how aroma and essential oils modulate appetite and have a potential to support healthy weight. In a 2005 study, researchers concluded the following about inhaling the scent of grapefruit oil (SGFO) in rodents, “Furthermore, a 15-min exposure to SGFO three times a week reduced food intake and body weight. Finally, limonene, a component of grapefruit oil, induced responses similar to those caused by SGFO, and diphenhydramine eliminated the glycerol response to limonene. Thus, the scent of grapefruit oil, and particularly its primary component limonene, affects autonomic nerves, enhances lipolysis through a histaminergic response, and reduces appetite and body weight.”4

Several of the same authors reported in another journal that same year that grapefruit was stimulatory. This was thought to be one primary mechanism for the effect on appetite and weight of rodents, “These findings suggest that scent of grapefruit oil and its active component, limonene, affect autonomic neurotransmission and blood pressure through central histaminergic nerves and the suprachiasmatic nucleus.”5

In an earlier study, other researchers also found evidence that grapefruit oil simulated the sympathetic nervous activity in fat tissue in rats, increasing fat breakdown and prevention of weight gain.6

Finally, a human study, which I wrote about here, concluded that, “Black pepper, fennel, and grapefruit oil caused a 1.5- to 2.5-fold increase in blood pressure indicating an elevation in sympathetic nervous system activity.” This supported some of the findings found in our furry friends above.

Suppression of a Neurotransmitter Indicated in Many Diseases, Including Alzheimer’s

One study found that minor constituents isolated from grapefruit oil could inhibit acetylcholinesterase. This enzyme breaks down acetylcholine, a neurotransmitter.

Remember that the essential oil itself is mostly limonene with many other compounds presents. This results in various health benefits and can prevent the side effects of using just a few chemicals extracted from the whole essential oil. Still, the study does show potential for one minor effect of the using this essential oil.

One-to-two drops a serving…that’s the amount of oil it takes for all the benefits.

Make sure you read my homepage article to get a better understanding of the power of this essential oil and some safety instructions.

For those looking for a healthier 2017, adding one drop of grapefruit oil to your water a day is an easy start!!