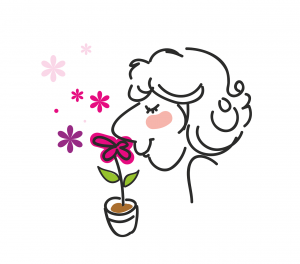 One of my amazing friends, who invited me to speak to her amazing essential oils group last week, Lori, recently posted on her Facebook group an intriguing TedX video presented by perfumery expert, Dawn Goldworm.  After viewing the video, I began to research a bit on what Dawn claimed. I found out that she has a condition known as synesthesia, in which she can “see smell.” Intrigued, I looked further into this. It appears to be a non-pathological condition with a neurological connection and genetic component. Synesthesia is not classified as a psychological issue due to the fact that  doesn’t disrupt life negatively. In fact, in the case of Dawn, it is actually quite profitable.

Dawn is currently co-founder of a successful company, 12.29, with her sister. Her company is credited for the “scent-sational” branding of many famous celebrities and companies. That is, these two ladies are responsible for formulating their customer’s own unique smell.

In the TEDx video, Dawn states that she believes that smell is the most important sense in the young and that is shapes behavior starting at the time that newborns recognize their moms’ smells. She also has proven that smell has a profound influence on reactions in adults. Dawn and her sister have convinced powerful adult CEOs and influencers to find their unique brand of scent and profit from them! She is literally using the power of olfaction to market and “sell consumers” perception on people and products.

I have written on the topic of smell and the effects on our body and psychology, including behavior, in several contexts:

I wanted to specifically see how smell can effect children. I found a study which did, in fact, provide evidence of Dawn’s belief. In a group of 5-year-olds, researchers stated, “These findings show that odors can become conditioned to experiential states and when later encountered have directional influences on behavior.”

Even more intriguing, as I dug deeper, I found that studies are currently evaluating the connection between possible deficits in the sense of the smell and ADHD (Attention deficit hyperactivity disorder) behavioral challenges. One study, cited supportive evidence for altered olfactory performance among 50 ADHD children versus 50 controls. The authors’ state:

Deficits in olfactory function are common features in neurodegenerative and neuropsychiatric disorders. Olfactory processing is related to dopamine metabolism and orbitofrontal cortex functioning, both known to be involved in the neurobiology of ADHD. Some investigations suggested alterations in olfactory processing (identification and detection threshold) in patients with ADHD. Despite increasing knowledge, controversy about this topic still exists regarding children with ADHD. This study was conducted to help elucidate some of this controversy.

There have also been similar exploratory studies with autism on this connection. Researcher have reported on how smell influences behavior and even food choices in autistic children.

Social cues may also shape responses to smell, as this study with children and adolescents found. Furthermore, studies have found connections to being able to “smell others pain,” indicating “empathy by the nose.”

It is important to point out that synthetic fragrances and chemicals in personal care products hold health risks, which I discussed previously here. Furthermore, Dr. Mercola also reviews health caveats of perfumes and man-made chemical smells.

Wouldn’t you rather use scents that are non-toxic, calming, healing, and provide wellness benefits around your children over synthetic fragrances and chemicals that can harm them? Furthermore, essential oils that are pure quality and not adulterated can protect us from microbes, pollution and environmental contaminants as they support our respiratory tract and calm our brain.

Choosing oils passes the “sniff test” for me! (The idiomatic version, that is.)

Here is the TEDx video below: