A story in a picture, The Robert Joki Stereoview collection at the Saratoga Springs Public Library illustrates the rich upbringing of Saratoga Springs, NY, from the tapping of the natural spring system, the development of Broadway in the 19th century, and the ravaging fires that shaped Saratoga's cityscape.

Through a simple trick of the mind, stereoview presents two offset photographs with use of a stereogram to create 3D depth from 2D images. Stereoviews were increasingly popular in the mid-1800s and captured anything from mundane life to beautiful environments lost with time.

With 1,435 stereoscopic images in the collection, the Saratoga Springs Public Library holds the largest public collection of stereoviews of Saratoga Springs in the world and was acquired by the Friends of the Library in 2013 from the late Robert Joki. 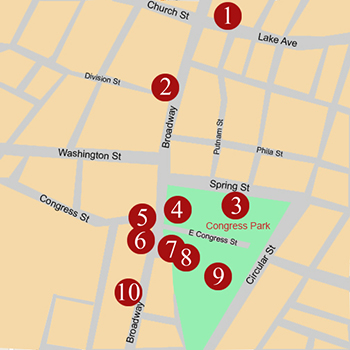 The Robert Joki Stereoview collection is open to the public in the Saratoga Room at the Saratoga Springs Public Library.

Below are images from The Robert Joki Collection (one side of the stereoview card), highlighting important landmarks in the heart of Broadway.

Completed in 1871, City Hall was capped with a bell tower and clock, which were removed in 1936. By 1826, Saratoga Springs was legally recognized as a village, and the area was frequented by prominent political and cultural figures of that day, including Martin Van Buren and Stephen Douglas. The building's name was changed in 1915 when the city was incorporated. 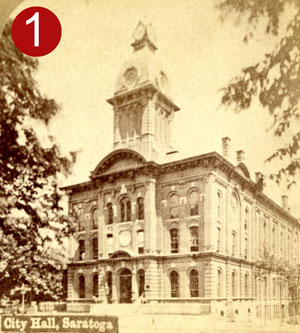 This magnificent hotel, which stood on the west side of Broadway on the south side of Division Street, replaced the original hotel built in 1824, which was destroyed by fire in 1865. The new Victorian version (seen in this photo) opened for business in 1874. It fell on hard times in World War II and was razed in 1946. 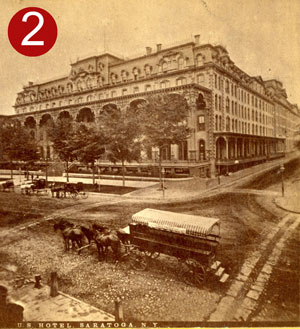 Owned by prize fighter, gambler and politician John Morrissey, a Troy native who built his famous Club House (later the Canfield Casino which now houses the Saratoga Springs History Museum). This structure stood on Putnam Street which, in the late 19th century, continued across Spring Street and ended at Congress Street. It was connected to Morrissey's Club House by a walkway. The 1860s brought more growth and development to Saratoga with the birth of the Victorian and Gambling Eras. 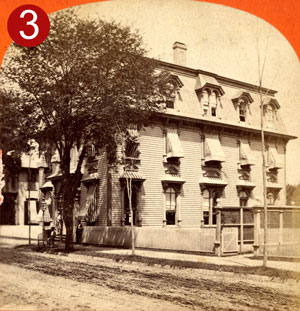 Congress Hall was built by Gideon Putnam, who suffered a fatal fall from a scaffolding in 1811 while the hotel was under construction. The hotel later burned in 1866. The mansard style version seen in the stereoview opened in 1868, and the hotel was razed in 1912. It stood on the east side of Broadway between East Congress (entrance to Congress Park) and Spring Streets. 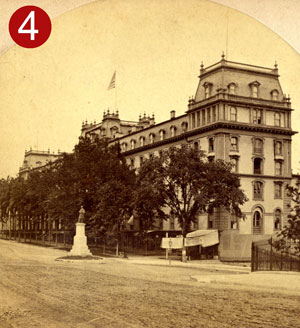 This hotel was located at the southwest corner of Broadway and West Congress Street where the Saratoga Springs Heritage Area Visitor Center now stands. Erected after a fire destroyed Stanwix Hall on July 4, 1864, the brick hotel also burned on October 1, 1871. 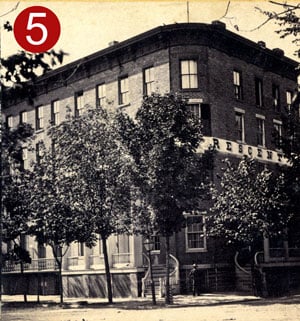 The Victorian Era represented a golden age in the history of Saratoga Springs. Many Saratoga resorts and spas accommodated the heavy influx of visitors during this period, fullfilling high society's desire for an extravagant retreat at a luxurious spa. Seen here is a photo of the great Columbian Hotel that replaced the original, having burned in 1871. The hotel was enlarged from 1875 to 1876, but burned again in the Convention Hall Fire of 1965. 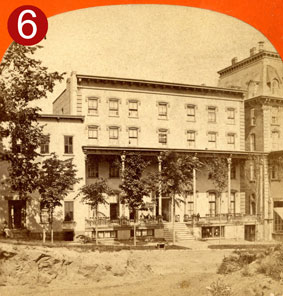 Saratoga Springs has long been celebrated for its splendid natural springs, bubbling with rich mineral water. Discovered in 1803 by Gideon Putnam, the Columbian Spring was later acquired by John Clarke who erected a Grecian pavilion in the 1830s. The pavilion was replaced in 1875 by the Congress and Empire Spring Company with the high Victorian Gothic version seen in the stereoview which connected Columbian and Congress Springs. 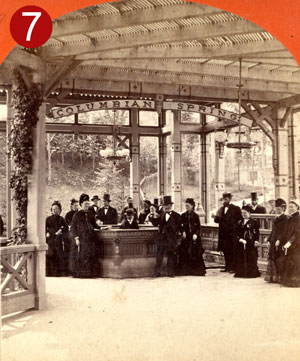 Here is a stereoview taken from inside the original park which occupied the land south of East Congress Street. This spring was discovered in 1792 and acquired in 1826 by Dr. John Clarke, who bottled the water. Prior to settlement, Saratoga was inhabited by the Iroquois Indians who called the area "Sarachtogue," which means "hillside of a great river" or "place of the swift water." Native Americans came to the valley each summer for healing and peaceful meditation by the natural springs. 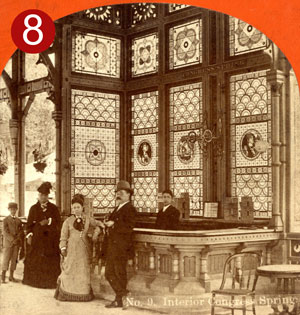 The music pavilion was a charming example of Victorian decoration used by the park band during their evening concerts. It was demolished in 1930 and replaced with the War Memorial in 1932. 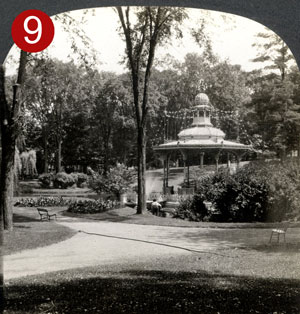 This hotel opened around 1860 on the west side of Broadway, razed after the 1902 summer season. Throughout the latter years of the 19th century, Saratoga Springs' status continued to rise, and the area was considered one of the most prominent travel destinations in America, booming with natural beauty, culture, gaming, and fun. The property is now the site of Saratoga Central Catholic High School. 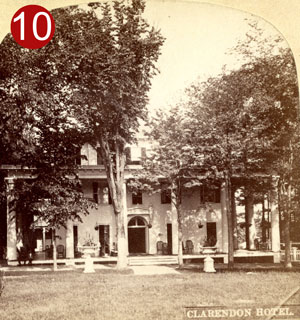