Child’s Play 9 – Rock N’ Ride – at Hall of Springs this Thursday
SARATOGA SPRINGS – If you want to know about the good your contributions do, ask a Mom.

When people gather for the Dake Foundation for Children’s annual benefit – Child’s Play 9 at The Hall of Springs on Thursday, May 10 – they will see real examples of real people who have received real help. 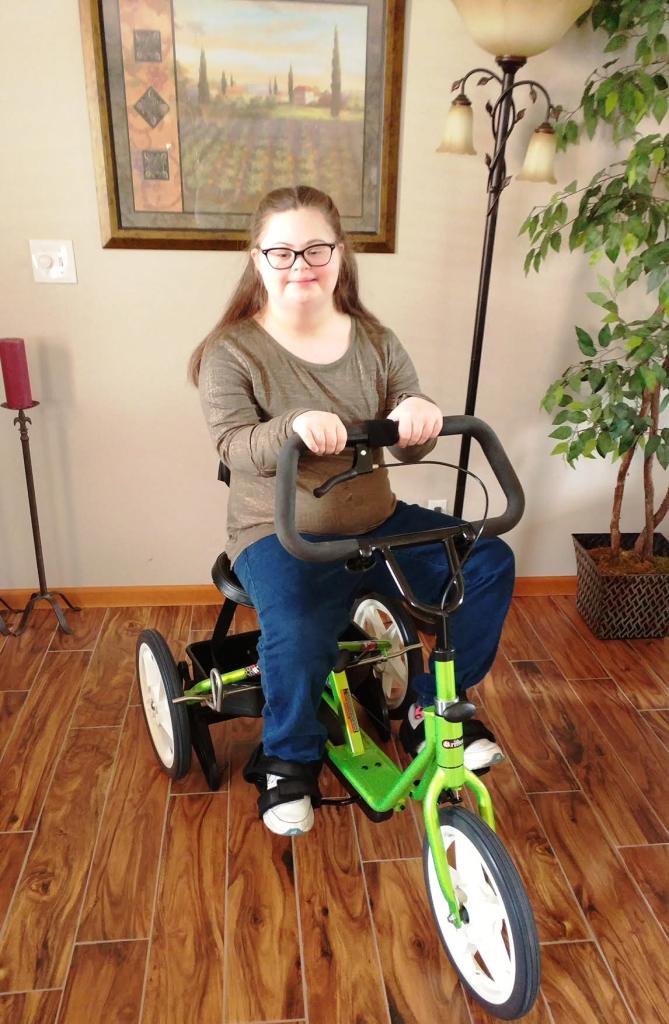 Real help for people like Kateri, who now have the means to participate in all the things children should be able to do.

No longer relegated to the sidelines, Kateri can join her friends, classmates and family at play. Kateri will be an honored guest at Child’s Play 9, and her mother, Jeanne, already received the best Mother’s Day gift one could get: It is the access – the leveled playing field – she sees each time her daughter gets on her adaptive trike, a grant from the Dake Foundation for Children.

Jeanne explains:
“Kateri will turn 14 on May 7th. She is the youngest of my four children. Kateri and her sister Haley have the distinction of being the only natural siblings both with Down Syndrome (DS) in our area. Her brothers Calvin (who is married) and Kyle are a big part in her life. She sees them both daily. Kateri participated in Calvin’s, and his wife, Sara’s wedding. She is a student at Farnsworth Middle School, part of the Guilderland School District.

“As with many individuals with DS, Kate has a number of medical issues.

“She has had over 20 surgeries, the most serious being an 8.5 hour surgery to repair her heart as the center had never formed before birth. Kate is only partly verbal, and speaks in approximations, some sign language, and with a communication device. She is going to say her thank you at Child’s Play using her device.

“Due to her low muscle tone any typical bike, trike or scooter was impossible for her to use. I had no idea a bike could be available for her. As a single mom, having two daughters with disabilities, finances are always a challenge. The Dake Foundation is an answer to prayers.

“The process of working with the Dake Foundation could not have be easier. Matt assisted with the documents needed to apply, and Alana evaluated Kateri to see what trike would be the best fit for her.

“When she sat on a sample trike, Kateri lit up like a Christmas tree! I had never seen her on any type of bike before and she did well for something so new. She liked that sample trike so much that she chose that exact green one rather than the others, including her normal favorite color, red.

“When her trike was delivered to our home it was amazing. It came in a huge box, basically fully assembled. She squealed with excitement and could not wait to sit on it. With the delay in warm weather this year we were grateful that a stand was provided which allowed her to practice riding inside in the mean time. I took pictures of Kateri on her bike, she wanted to show them to everyone. To say she was proud of her bike is an understatement. 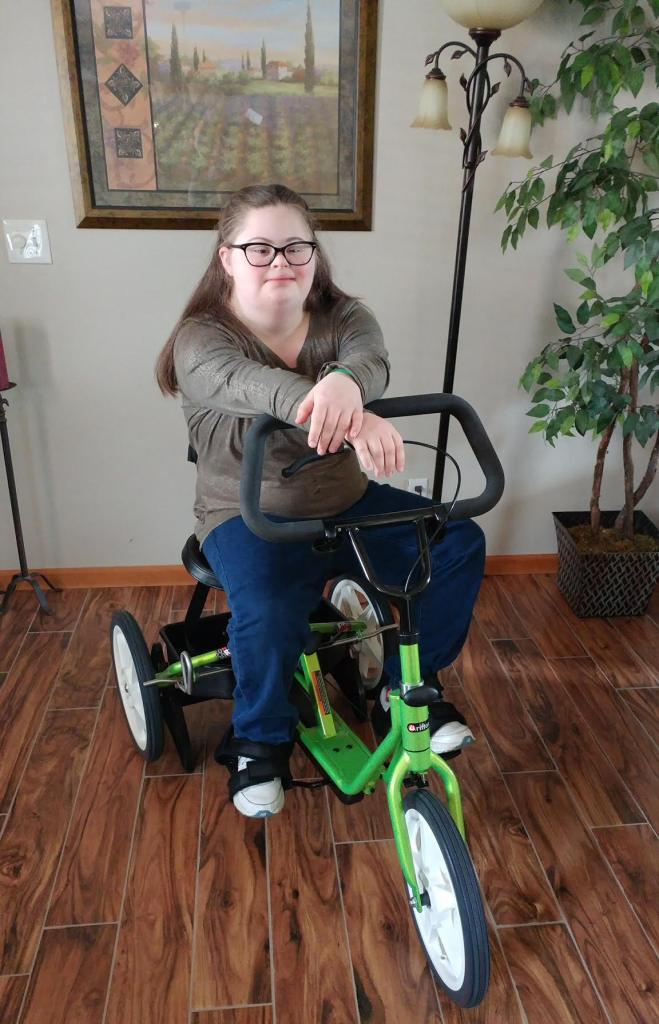 “For the first time Kateri has a bike to ride. No more having to just watch the other kids.

“When your child has disabilities that impair or prevent their participation in even the simplest of pleasures that others take for granted, you hope you’ll find the thing that will support them. As a parent, my goal is assist Kateri in ways that will allow her to enjoy her life as she chooses.

“The freedom of a bike ride is now a choice for her thanks to the Dake Foundation. Most of the supports Kateri needs are specialized and more expensive than their counterparts. Choices have to be made when you have limited finances and a bike that would meet her needs was definitely out of my ability to provide.”

——————
Friends, Child’s Play 9 has all the bells and whistles you would expect from a Foundation Gala at the Hall of Springs – the food and beverage; body tattoos, photo booth selfies and great raffle baskets. They’ll even have several unique VIP auctions for some choice upfront seats at this summer’s most prized SPAC concerts (including Keith Urban, Imagine Dragons, Kevin Hart, Chris Stapleton, and Dead + Co.) that you can’t get anywhere else.

But that’s not why you should buy a ticket and go.

Kateri is why. And Jeanne. And the leveled playing field.

Tickets to Child’s Play 9 – Rock N’ Ride – are $100, with Junior Tickets (for ages 35 and younger) at $75. The event is on Thursday, May 10, from 5:30-9:30 at the Hall of Springs. Advance tickets and raffle tickets can be purchased HERE. Tickets can also be purchased at the door, subject to availability.

For more information about the Dake Foundation for Children, visit their WEBSITE 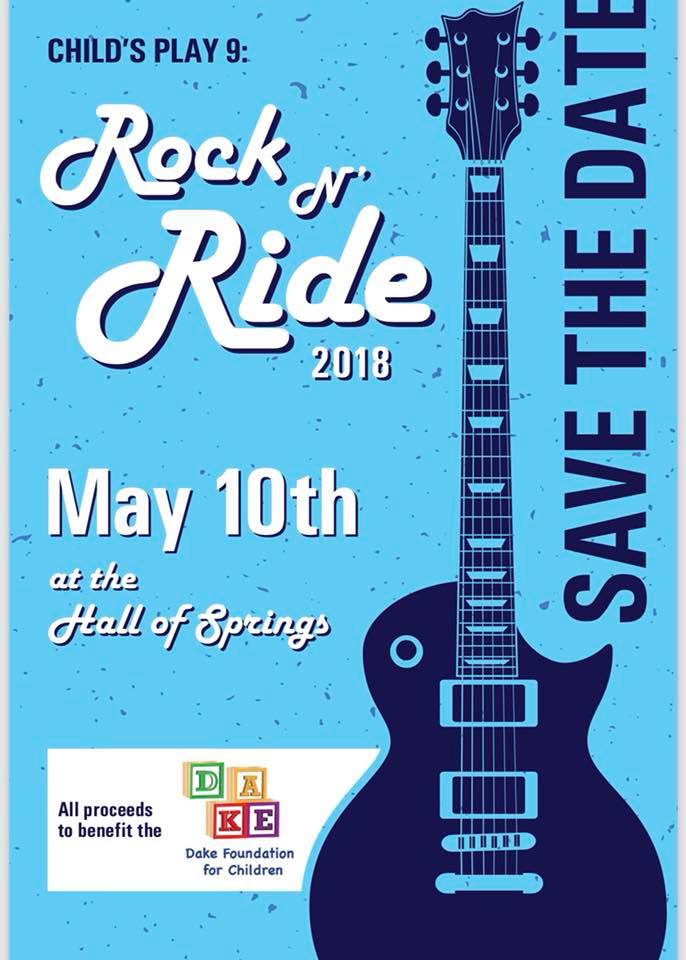