SARATOGA SPRINGS – Robin Dalton embodies the word community and Shelters of Saratoga is proud to announce she has been selected as the recipient of this year’s Help, Hope and Humanity award. She will accept the award at the Brighter Days Gala on Thursday, March 28 from 6-9 pm at Longfellows Restaurant.

Dalton has immersed herself in the Saratoga community she and her family have called home since 2007. While Robin is busy raising a family of four small children, she’s also an accomplished commercial real estate agent for Roohan Realty. However, when speaking to Robin, it’s evident her real pride comes from volunteering, raising awareness and advocating for community services that are the foundation of Saratoga Springs. Robin has worked tirelessly to promote and grow community services. Since 2009 Robin has been contributing her energy to the Saratoga Hospital Foundation, raising money to expand hospital services and open the Community Health Center which offers low or no-cost health services to individuals and families. Additionally, she serves as a board member and mentor for Saratoga Sponsor-a-Scholar. Robin’s previous honors include: 2017 Outstanding Parenting Award and Saratoga Woman of Influence. 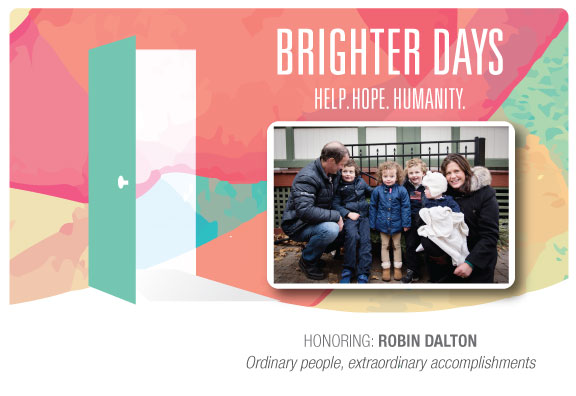 In 2016, Shelters of Saratoga announced it’s winter emergency shelter, Code Blue would take up temporary residence at the Soul Saving Station Church, just feet from Robin’s family home. Initially hesitant to embrace the increased foot traffic a shelter for 40 people would bring, Robin reached out to city leaders, Shelters of Saratoga staff and her neighbors to learn more about the need the program is filling for its participants. Soon after the shelter opened in November 2016, she and her family began volunteering, cooking and contributing supplies to the program. “I’ve embraced my new neighbors and have a greater understanding of the challenges they face each day” says, Dalton. “My eyes have been opened to the true need for a permanent shelter in Saratoga. It will give people a stable environment and opportunity in which they can move forward and out of homelessness.” Putting her words into action, Robin recently joined the Code Blue Solutions Task Force which primary objective is to find an accessible and permanent location for the winter shelter.

Please join Shelters of Saratoga on Thursday, March 28th as Robin accepts this honor. Reservations and sponsorships for the Brighter Days Gala are available starting at $100 and can be purchased HERE.