Visit Saratoga.com For Everything Saratoga
Enter Giveaways Advertise
Note: Saratoga.com is not responsible for posts and comments written by non-staff members.
Home  »  Uncategorized  »  Spectacular Weekend at the Sagamore and Glacier Ice Bar and Lounge There was so much going on this past weekend! First and foremost was Chowderfest which, according to everything I’ve heard and all the posts on Facebook, was a huge success. I love Chowderfest…the people, the music, the excitement and, of course, the chowder. This year, however, I had the opportunity to head up to the Sagamore for a girls’ getaway weekend with a group of friends, and to visit the incredible Glacier Ice Bar and Lounge. Four of us headed north for our overnight excursion and another friend met us up there for the afternoon. Our suite was gorgeous…very rustic and beautiful and the pictures both above and below were taken right off of our deck overlooking the lake. We ventured out for our first glimpse of and visit to the Glacier Ice Bar shortly after noon. It was perfect. The air was absolutely frigid, but the sun was warm. There was no wind, and not so much as a wisp of a cloud in the sky. The Ice Bar was, to say the least, very, very impressive. The entire bar was made of ice, as were the surrounding high top tables, chairs, benches and “thrones”. Eighteen thousand pounds of crystal clear ice! There was also a giant bear standing proudly to the side of the bar. Everything sparkled in the sunlight. It really was a magical creation. And in the early afternoon…no crowds! 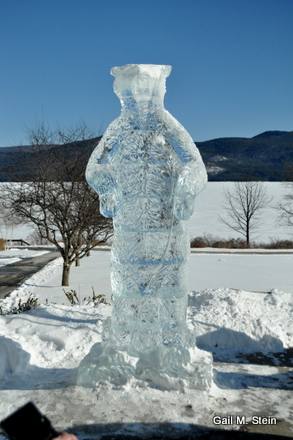 We wandered up to the bar and picked up a drink menu to peruse the selections. Most of us settled on a “Snowball martini”, an incredible mixture of vodkas (and, in all honesty, for the life of us, we cannot remember what was actually in them) with a skewered toasted marshmallow across the top. 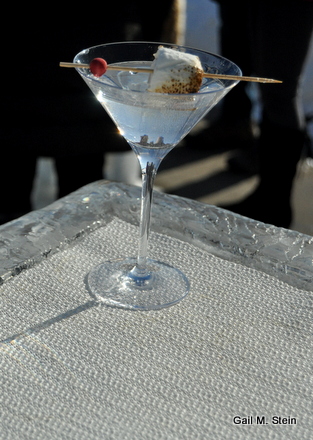 The combination of icy cold drink in an icy cold glass sitting on an icy cold table was perfection. It didn’t matter how low the temperature dipped, everyone enjoyed these marvelous drinks.
Behind the bar were more incredible ice carvings including this VW bus to which guests flocked in order to be photographed behind the steering wheel. We were no exception. 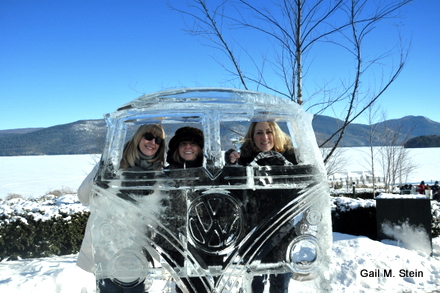 Even the views surrounding the Ice Bar were beautiful given the bright sunshine and intensely blue skies. 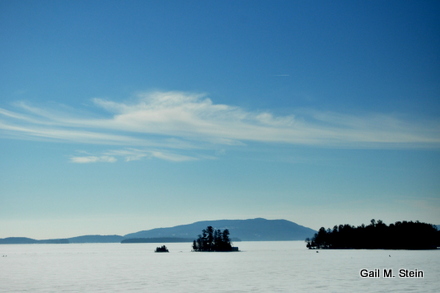 After spending a couple of hours out there, we headed back to our suite to warm up, but then returned around 5:00, just as the sun was setting. The crowds were considerably larger by then…and many people had arrived after spending the afternoon at Chowderfest. After dark, all the ice structures were illuminated and tiny white lights sparkled in the trees. The sky was clear, the moon was up and the stars were out. It really could not have been more perfect. Well…it COULD have been a little bit warmer, but everyone was dressed for the cold temps. Unfortunately, I worried that it might have been too cold for my camera, so I left it in the room and tried to get a few shots with my phone, but they did not do justice to the magic of the night. It was mobbed by nightfall, indoors and out. Both Caldwell’s Lounge and La Bella Vita were packed solidly with patrons, and the line outside to get to the Ice Bar was lengthy. But no one minded the crowds, no one noticed the cold…everyone was too busy having a great time. We definitely did. 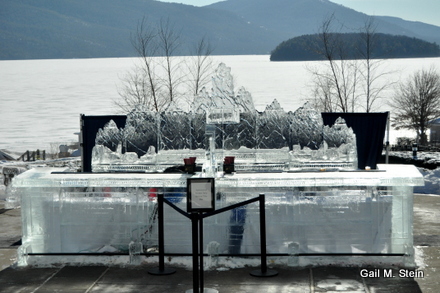 On Sunday morning, we packed up and prepared to head home, but not before one last visit to the bar which was now closed and silent. We could not have asked for a better weekend at a more gorgeous destination. And those Snowball Martinis? To die for.
The Glacier Ice Bar and Lounge is now closed for 2015. It was open for two weekends, but we found out as we were leaving that it will most likely go for THREE next year! 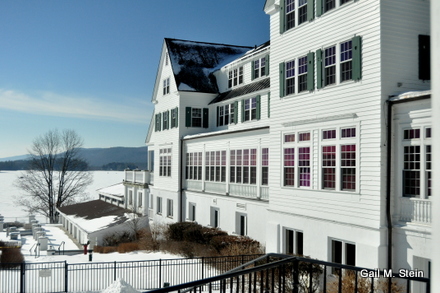