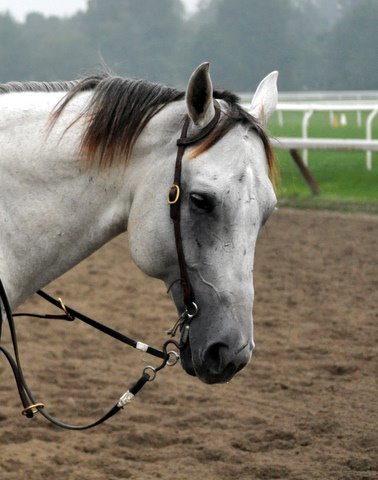 On the eve of the 2009 Saratoga race meet, it’s easy to get caught up in the cacophony because, while the pace is hectic–it’s the most fun sort of hectic into which the human soul can be thrust. For me–and others of like mind–this joyous madness begins way back in mid-April, when the Thoroughbreds first start to move back to Saratoga from their winter “snow bird” perches.

Forget the First Saturday in May: each day that brings us closer to The Last Wednesday in July finds the decibels in our heads growing louder: every minute that ticks by, we become more and more crazy with joy. The horses are our rock stars: the Sallee and Brook Ledge vans, their buses filled with potential.

The weeks leading up to the meet is a time of wild planning, as NYRA prepares to move an entire corporation north for six weeks. This is a monumental feat–talk about being organized: basically, NYRA moves Belmont Park up to Saratoga for a month-and-a-half. In the midst of this packing frenzy is the necessity of being uber-together, to assure that not one paper clip or betting voucher misses its ride up the Northway.

The Saratoga meet is like a big, wild-eyed vacation for hundreds of thousands of people and animals who, just last week–may not have known each other. But if you’re a fan of this sport, you trek to Mecca once a year to pay your respects, renew acquaintances and bow to the pari-mutuel windows. For six weeks every year, everyone is a friend or at least a potential temporary confidant. It’s difficult to keep your head on straight…while this is good madness–it’s madness, nonetheless. How to get Zen and stay there?

Thoroughbred racing is nothing if not The Sport of the Frantic: the fans are wide-eyed and READY. The city is goosed into Las Vegas Mode: what happens in Saratoga, stays in Saratoga. Alcohol flows, food and hay are served up by the truckload, hotels are filled, hospitality is at its best.

Even in the midst of a recession–Saratoga will make out OK, and the party will rage on ’til Labor Day. The volume gets louder and louder with every passing year as the current state of the economy forces many people to cram two weeks of vacation into three or four days. This is a time of noise and cacophony for Saratoga and for anyone within a 30-mile radius–willing or not.

This is the best time of the year: Christmas, Thanksgiving and the Fourth of July, all rolled into one. If you’re not on and ready to jump into the parade–step aside, because you’ll be run over by a float if you can’t keep up.

The loudest time of the year for a small city in the mountains.

And all because of the most Zen animals in the world.

So how can we jump into the fray, paticipate fully, have the time of our lives, 24/7 if we wish–and not mentally crash and burn like a stray kite on electric wires?

Look at the face above, that gorgeous, quiet, grey face. That face belongs to the posterboy for Zen: Dakota is strong, wise and ultimately Quiet. He knows what it’s like to find his inner life by going deeply within, and ignoring the noise around him: it may be that no other being–horse or human–currently at the Saratoga Race Course has the kind of pressure to surrender to the noise as Dakota, for he is the pony for Scott Blasi, Steve Asmussen’s Assistant Trainer. And Dakota is the pony who escorts a rock star, the one, the only–Rachel Alexandra.

Dakota is called a “pony.” A “pony” on a racetrack is a horse of any breed who’s not a racing Thoroughbred, but who has a job at the track. So Scott Blasi’s pony is the horse he rides to train horses. And to lead a superstar, gifted athlete onto the track for her morning workouts.

Dakota is not famous. His handsome face will not grace the cover of Maxim or even the local papers. He goes about his day relatively unnoticed by most people–but he has a job of tremendous pressure, and is constantly surrounded by photographers, writers, reporters, trainers, grooms, fans–every human who tries to get to Rachel Alexandra or even near her encounters Dakota first.

If her picture is taken, 50% of the time–Dakota’s picture is taken, too. His job is to not only withstand the psychic pressure of everyone pressing in on the great filly–but to be the first line of defense against negative pressure. His job, while relatively unnoticed by the masses, is perhaps one of the most important on the racetrack: to calm down the country’s greatest Thoroughbred and be companionable. Dakota’s company and quieting influence help Rachel Alexandra get to the place of power from which she blows away the competition.

Dakota has found his Inner Horse. He has a job of supreme pressure, and yet his eyes are clear; his heart is calm and he speaks softly.

The next time you feel pressure from life–work, relationships, finances, home problems–or if you’re simply one of those who are on your way to Saratoga to participate in the World’s Best Annual Party–think about Dakota. The temptation is to party like it’s your last night on Earth and then become crispy, to quote my photographer, Cathy Duffy. But the goal is to emerge on the other side of the experience–not only not crispy, but actually refreshed.

Think about Dakota, and the fact that he escorts the country’s most famous Thoroughbred through a tornado of flashbulbs and hordes of fans. He bears the burden of carrying her Assistant Trainer, but more than that–of calming down a horse who has the pressure of adoration on her perfect withers. (It’s not easy to be The Best: expectations are oppressively high, and you’re always on-stage.)

And yet Dakota manages to go within, to be his own Inner Horse–and to stand on the track while his great charge makes the Earth roar with the sound and the fury of her talent. He will then escort her back to her barn area and ask, “How’d it go?”–and Rachel Alexandra, the horse who’s bearing the weight of the world on her withers–will nudge Dakota and thank him for being strong for her.

Find your Inner Horse. Whatever the noise in your soul–painful life pressure or joyous celebration of the races–go deeply within, find your Equine Mind, and walk gracefully through the experience.

And if you ever meet Dakota–thank him for sharing his own Horseness and wisdom with you. He’ll nod slowly, wisely and wink, telling you that, if he can do it, you can, too.

Truly, may the Horse be with you.

[Photo credit: many thanks to Cathleen Duffy of The Horse Whisper Photography.]