Visit Saratoga.com For Everything Saratoga
Enter Giveaways Advertise
Note: Saratoga.com is not responsible for posts and comments written by non-staff members.
Home  »  People You Should Know in Racing  »  What are YOUR Impressions of Saratoga? Mine are Summed up in a Store.

Resort destinations like Saratoga Springs often fall prey to carpetbaggers and snake oil salesmen who come to town when the number are high, and stay only long enough to cash in on visitors’ craving for reminders of their time spent in the Spa City. Hawking cheaply-made t-shirts, shot glasses sporting scandily-clad, winking Hawaiian girls and birds that utilize the pendulum theory to dip into a glass of red water–there is nothing worse than a cheesy souvenir shop. Just being around one of these smarmy types makes one feel dirty somehow.

Saratoga has seen her share of these joints, hastily rented and open just-long-enough to catch the racing season. The owners then blow out of town, never to return. The word, “accountability” is not in their lexicon. Neither are “neighbors,” “friends” or “respected” used to describe these takers.

How many times have you gone on vacation, and of course, wanted to get something that will bring a smile to your face every time you use or see it, because it represents a great time in a fun place? But then you scope out the stores or kiosks that sell souvenirs, and you cringe because the products are all nasty, subtly (or not-so-subtly) sexual or just really poorly-made. And you decide that maybe you can just commit to memory all the good times, and call upon your brain anytime you want to think about your vacation. At least your memory doesn’t have “I Went to __ with Stupid” written all over it. Or rats in the basement.

Enter Impressions of Saratoga, the freshest breath of air for which a visitor or local could 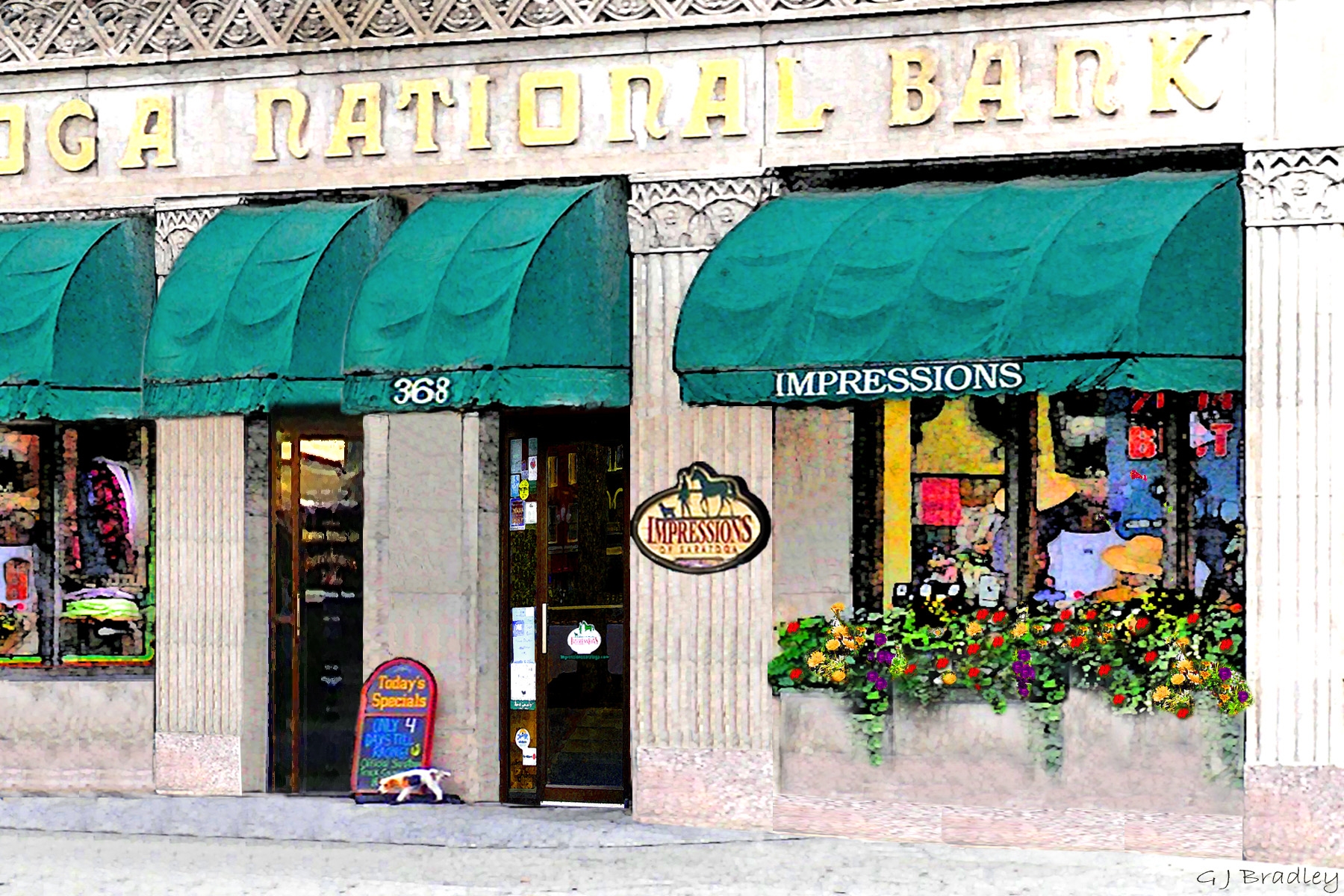 hope. Every resort town in the world should have an Impressions, a place of elegance, style and dignity. (“Dignity” is a big deal to me: my Mother impressed upon me as a child that someone who doesn’t respect themselves won’t respect anyone else–and that that person’s lack of dignity is always obvious.) Impressions is 0wned by Mare and Dave Barker, people who not only love and respect their hometown of Saratoga Springs, New York–they also understand the world of horse lovers, from their role as insiders.

Mare holds a degree in Equine Management and is an accomplished equestrian: she’s co- 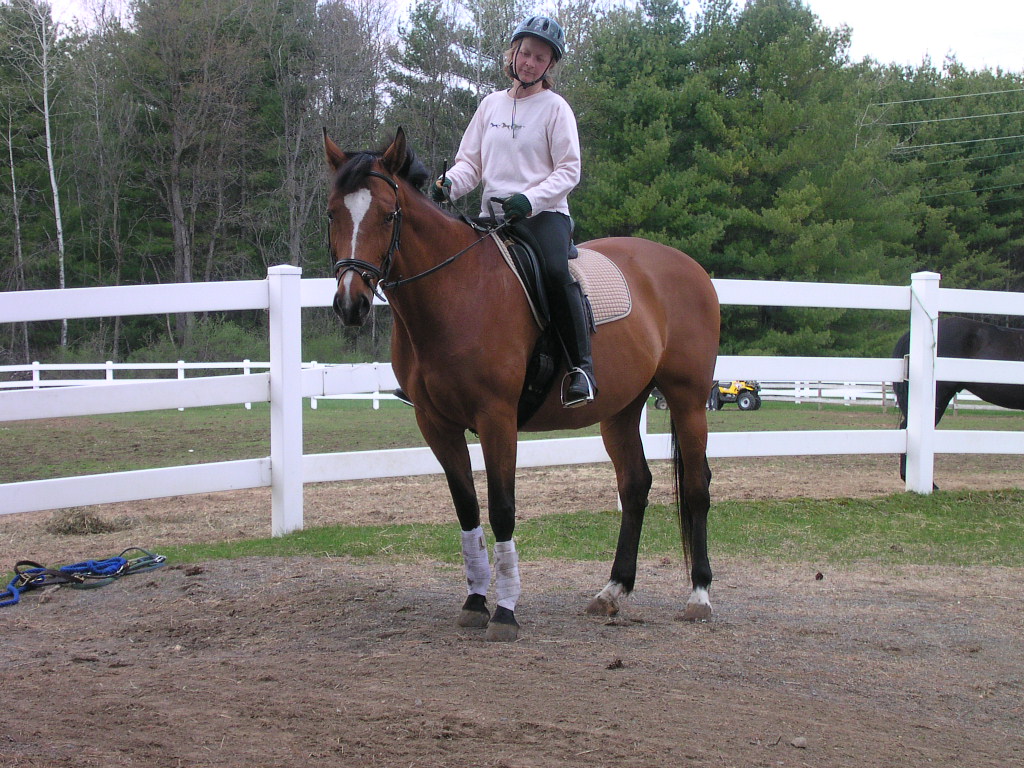 owned Impressions for 31 years, since Dave first opened the store. Now, the key to being a shop that enjoys longevity such as this is that magical thing called genuine understanding. Because horses are part-and-parcel of their “after work” lives, their store can offer products that truly speak to people who live, work or just plain love the equine breeds. The Barkers are not fly-by-night souvenir salespeople who happen to live in a horsey town: they are horsey people who happen to own a store that offers mementos of a city that lives and breathes horses of all shapes and sizes. At any given time, Saratoga plays host to professionals and fans of every equine discipline: Standardbreds, Thoroughbreds, Arabians, Quarter Horses, Saddlebreds, ponies, Fresians and more breeds than the mind can fathom live in the city or its immediate environs, or gallop into town to compete and greet admirers. Horse racing, polo, therapy riding, dressage, hunter/jumper, eventing, gymkhana–virtually every equestrian passion has its own body of fanatics and pros, and every single one of those people can find something that speaks to the heart at Impressions of Saratoga. 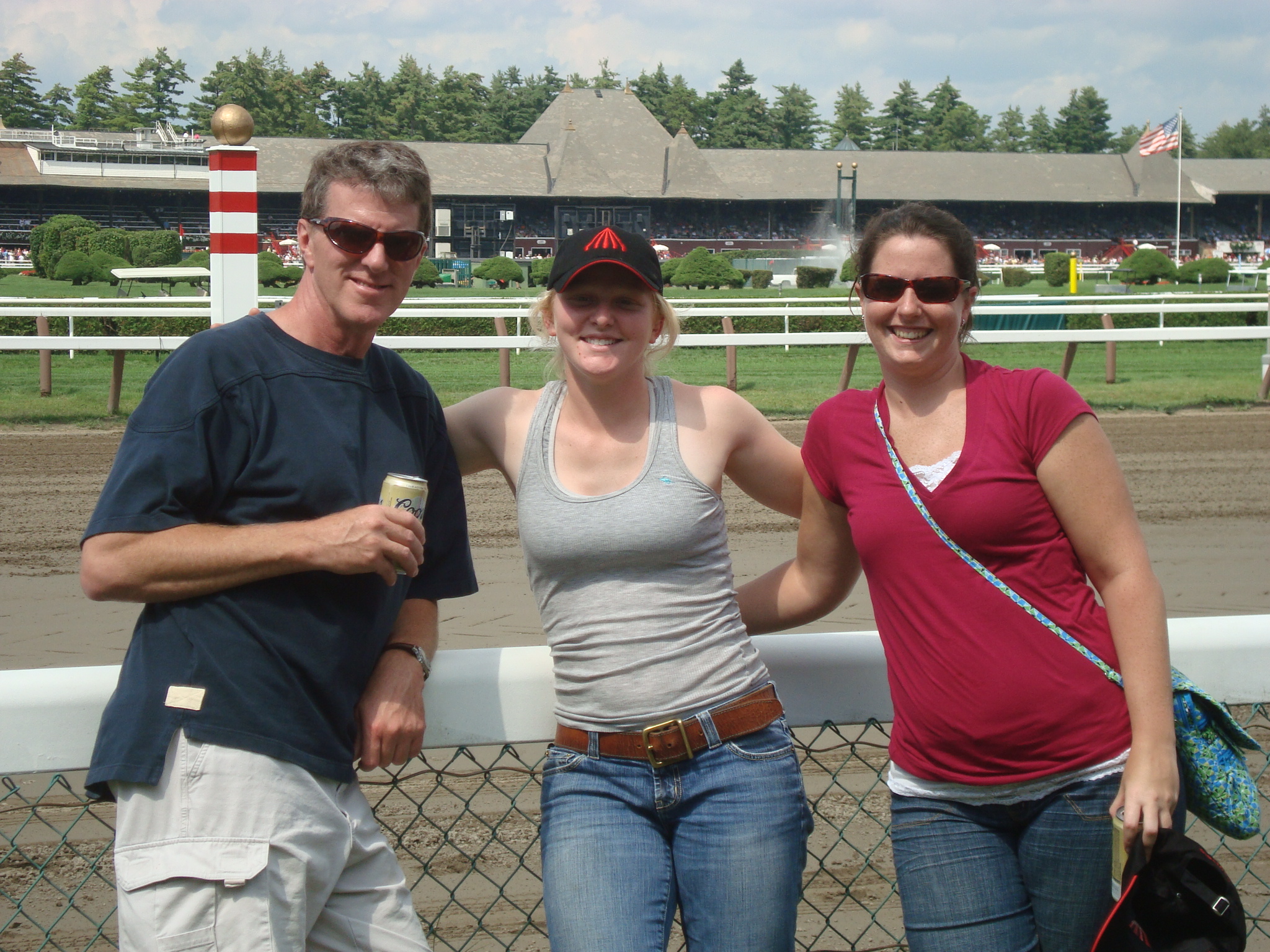 Were Mare and Dave simply retailers who set up shop on Broad 31 years ago, hoping to make a buck and maybe even a profit–they’d have been gone less than a year later. (It’s well-known among downtown businesses that placing your store on Broadway is either the equivalent of knighthood–or the death knell for your retail aspirations. You’ll either bring in a business that was thoroughly-considered and meets the standards of locals, first (thereby lasting for generation)–or, if poorly conceived or badly managed, you will crash and burn within the first two months. There’s no in-between on Broadway in Saratoga.) After three decades on the same corner (Broadway and Phila)–it’s safe to say that Mare and Dave had a stellar idea from the outset, which they wed to their love of fine things

A participant or fan of any equine sport can walk into Impressions and find beautiful, hand-crafted objects that speak to the heart. Coffee mugs featuring fanciful horses, extraordinary colors and eye-pleasin fonts greet visitors, cheek-to-jowl with pens that make one wonder if Waterman now has a Saratoga line. Keychains with horseshoes or saddles or riding silks are an easy pick-up if you’re just so overwhelmed that you don’t know what you want. Each item has been carefully chosen by Mare, herself, before finding its way onto the shelves in Impressions. 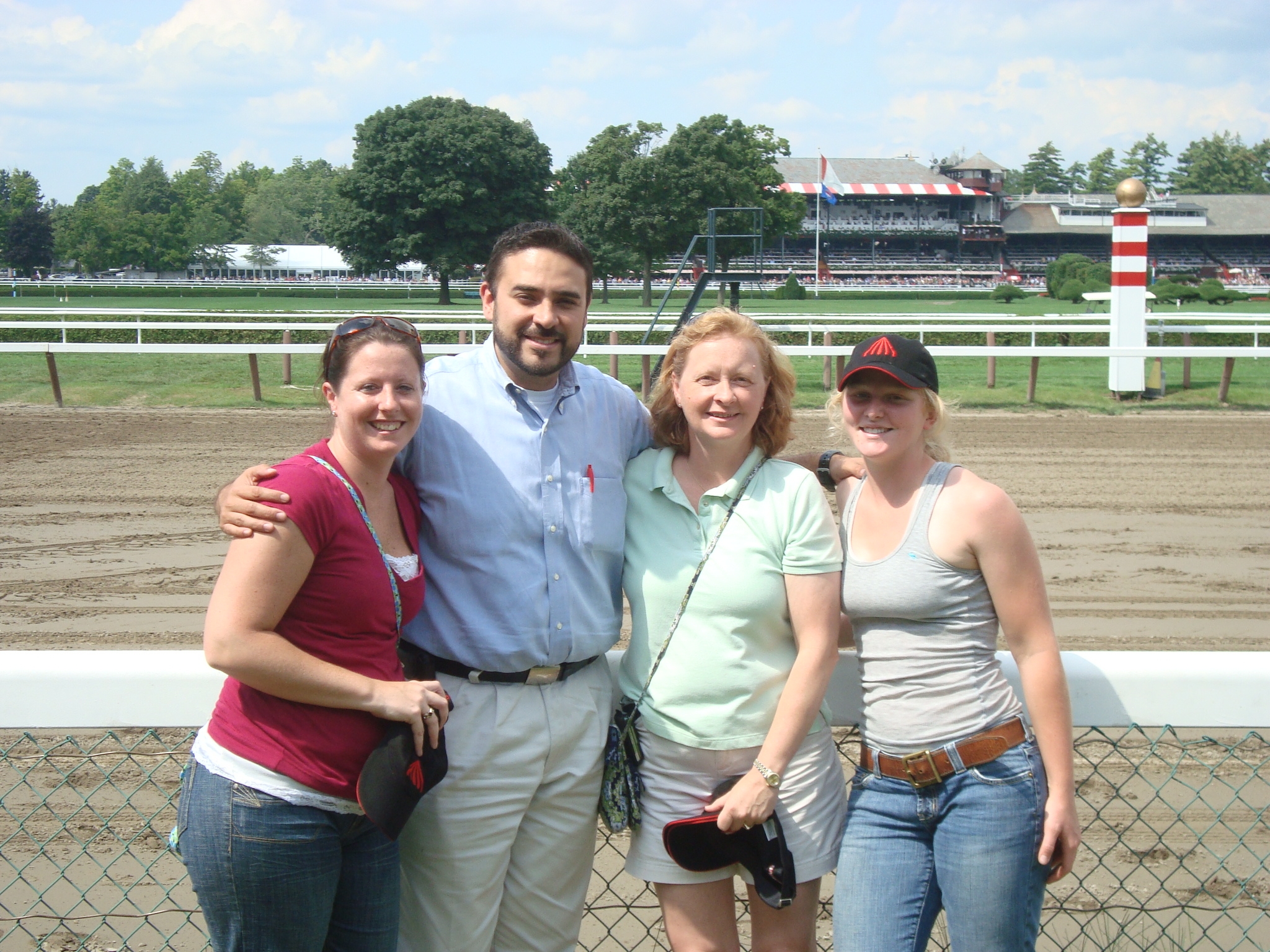 Two of my most treasured possessions were purchased there five years ago, two weeks apart: anyone who knows me knows that I sport a thin, sterling silver cuff bracelet on my left wrist that reads in a simple, strong font, Alpha Mare. I bought this bracelet to confirm to myself that which others were saying about me: I put it on that day in May and have never taken it off. The best $32 investment I ever made, that of reaffirmation of one’s Life Mission.

The other item, which I wear almost daily, is my lovely pair of gold horse earrings. Gold leaf over sterling silver, each earring features a beautiful horse and jockey, racing down the final stretch. (No, the earrings aren’t so huge that the horses are on a track: those of us who know Thoroughbreds know precisely what one looks like when she’s running hell-bent-for-election down the homestretch toward the finish line.) I love those earrings, and wear them all the time. And every day that I wear them, someone admires and asks where I got them. I always chirp, “Impressions of Saratoga!” and then state that I don’t know what they cost now, five years later–but when I bought them, they were a mere only $20.

It’s that combination of extraordinarily beautiful gifts–everything from pottery and games to framed photographs of beloved equine athletes and Ariat shoes and boots–and attention to detail that make Impressions of Saratoga the single-most exceptional store in the entire racing city. I don’t walk into the store nearly as often as I’d like, precisely because I’d walk out with everything my eye fell upon (and my heart needed desperately at that moment). There’s never been an item at Impressions that I thought was inappropriate or garish.

To the contrary, beautiful crystal stemware featuring racing silks sit across from genuinely elegant jewelry and clothing. The world’s greatest jockeys regularly stop by to autograph their photos on the sidewalk in front of the store–just because they love Mare and Dave, and know that they are respected as athletes by this dynamic duo. 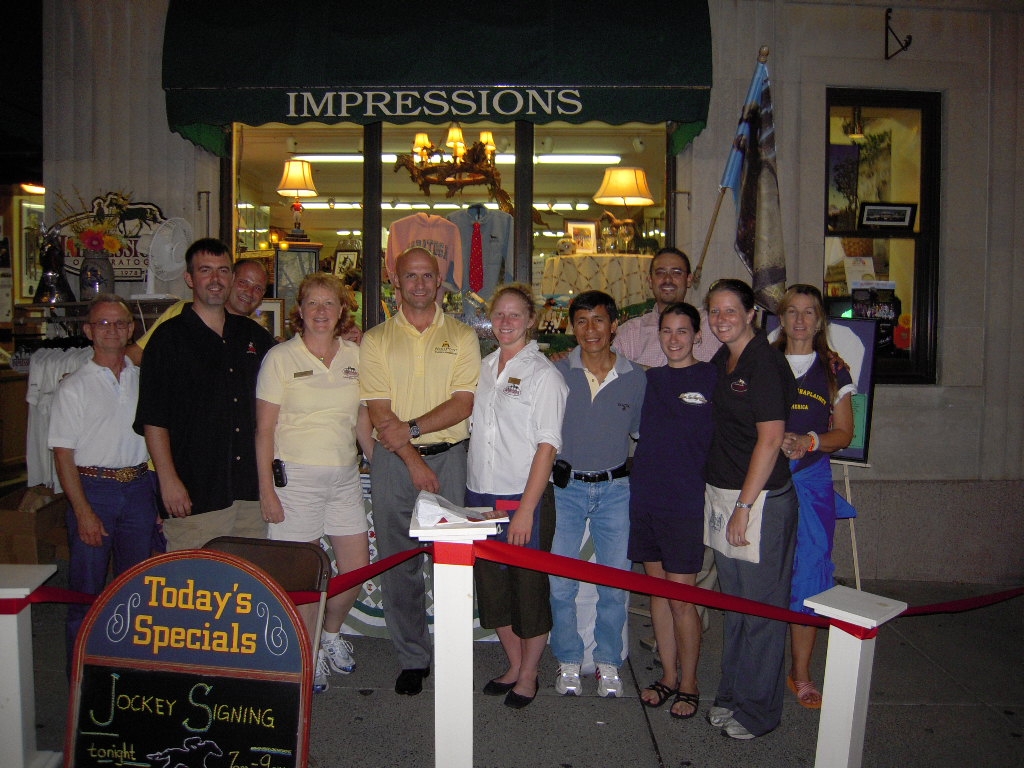 (I’d like to add here,also, that the last time Earth, Wind & Fire played at SPAC-Saratoga Performing Arts Centre–I went into Impressions to buy a baseball cap for the band’s road manager, to thank him for the backstage passes and great seats the night before. Hurriedly, I told Mare that I needed a baseball cap, something simple and elegant–like Saratoga, itself. She immediately grabbed a beautiful black cap with Saratoga Springs embroidered in red. Simple, and absolutely perfect. I took the cap to the hotel and gave it to Jabari, who absolutely loved it–and donned it immediately, much to the admiration of the band and crew who took over the restaurant for breakfast before departing. Every now and then I see a photo of him wearing that cap from Impressions of Saratoga, and know that the young man genuinely loves his reminder of Saratoga Springs. And that he wouldn’t wear it were it not up to the standards that were set by working with mentors of such style as Verdine, Ralph and Philip.)

And I think, “Cool,” because once again I scored big points with someone simply because I provided a gift in the green-and-gold Impressions bag. You, too, can earn brownie points with friends and business associates when you present them with an Impressions gift. Whether you stop in their beautiful store–allow yourself ample time to be overwhelmed–or order via the website, www.impressionssaratoga.com, you will be in awe that one location offers so many gift opportunities that fit your needs to a T.

If you stop in or email to order, ask for Mare Barker, herself. A brighter and more sincere smile you’ll never encounter. A better neighbor and community-minded twosome as Mare and Dave–well, they’re the poster children for residents of a city that esteems team players. And if there’s one thing that’s valued in Saratoga, it’s playing well with others.

May the Horse be with you–and may you, too, find things to touch your heart and decorate your Home that bespeak your devotion to the Spa City and her equine athletes.