Visit Saratoga.com For Everything Saratoga
Enter Giveaways Advertise
Note: Saratoga.com is not responsible for posts and comments written by non-staff members.
Home  »  Mark Your Calendar!!!  »  2012: The Year of Seattle Slew. 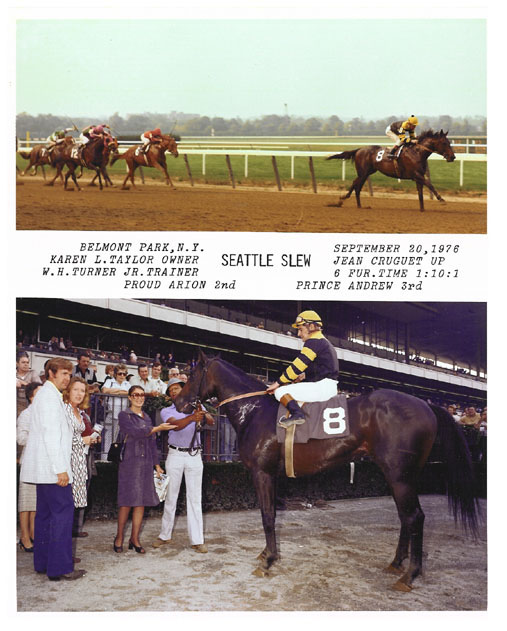 Happy Birthday, Seattle Slew! The mighty warrior horse was foaled on 15 February 1974 at Ben Castleman’s White Horse Acres Farm near Lexington, Kentucky–and on his strong back he took millions of people for the ride of our lives. This piece tonight will not be a recitation of stats, for birthday celebrations are about heart, guts, glory and love. Numbers–even extraordinary numbers, such as Slew’s achievements–have no place at a birthday party…
If you’re a racing fan, you know that today is the birthday of one of the greatest Thoroughbreds, ever. Anywhere, anytime, anyplace.

Seattle Slew, the most beautiful dark, dark bay/brown–he was all-but-black–captured my 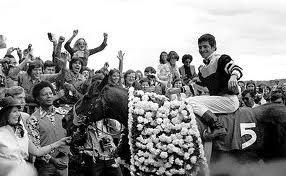 heart in 1976, when he won the Champagne Stakes. Love, as you know, cannot be described–but you know it when you feel it. I saw that monstrous two-year-old colt barreling down the home stretch on his way to a huge win (9 3/4 lengths–OK, one stat)–and my heart leapt right onto his back. In my head and soul, I was hanging onto Cruguet for dear life, feeling every rush, every inch of the way.
During the course of his relationship with them, Slew would take his talented, dedicated jockey, Jean Cruguet, and his quiet, brilliant trainer, William H. (Billy) Turner for one wild ride. The magical threesome rode into the Kentucky Derby undefeated–that is, they had lost no races before they got to the Derby–and they kept steam-rollin’ until they took the prize, the Triple Crown. Of only 11 Triple Crown winners, ever–the Slew Crew is the only team who can claim that.
Except for the aforementioned stat, I’m not going to toss out a bunch of numbers in an effort to show that I know Slew backwards-and-forwards. Besides, anyone can get those stats from Slew’s website; Wikipedia or the NTRA. There are over 766,000 Web references to the nearly-black colt who took my breath away in ’76, and the hearts and souls of so many others of you out there. 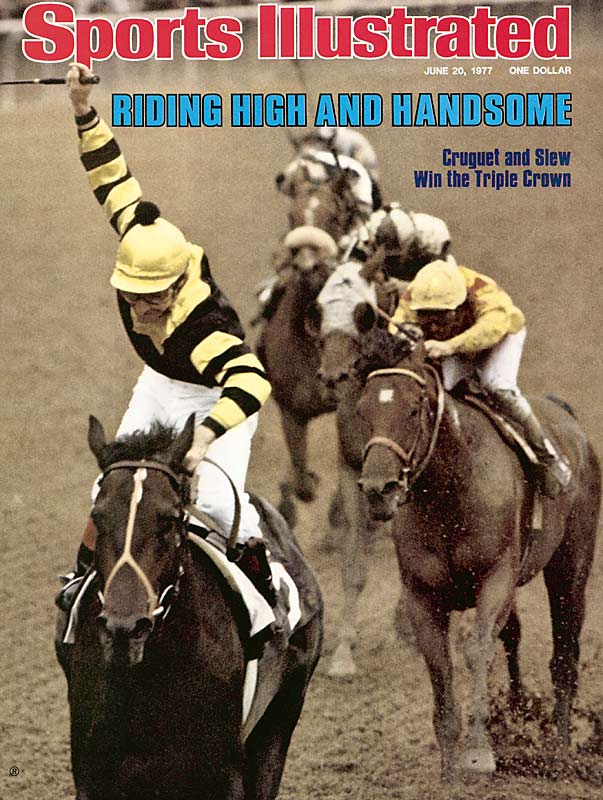 OH, OK: just one more number discussion: during the course of his career, Slew won $1,208,726. That may sound like chump change to youngins who think that horse racing began last year. We must acknowledge the fact that, along with inflation of everything else–purses for horse races, most notably BIG races–have grown insanely. That million-and-change that Slew won–well, in 2010, it would have been $4,297,674.98. We can’t compare horses, saying that any horse who races in 2012 is better or more accomplished because s/he’s won so much more money than horses in Slew’s generation–include Secretariat, Affirmed, etc. in that count–because it’s a moot point. Inflation is real–in 1978 I bought a brand new, loaded Thunderbird for $5400.
Fast-forward to today. Today is Seattle Slew’s birthday, and–although he’s no longer with us, he’s running in Elysian Fields–still, this is a day to celebrate.
And 2012 is his year, for this is the 35th anniversary of his dynamic Triple Crown win. Thirty-five years ago this coming June, Slew took those two great men, Turner and Cruguet, and made a team–a winning team, the only undefeated Triple Crown team, ever. (Yep, I repeated that, ’cause it’s worth noting more than once.) That kind of bond cannot be broken, even by death. Those three had a chemistry, a brilliance that brought out every ounce of strength, power and majesty of the beautiful Slew. When he did his war dance–dancing on his toes as he entered every track–the crowds knew they were in for a treat.
Think about that: the magnificent Seattle Slew was so self-aware that he danced–and then he hunkered down and exploded out of the gate with all the force of God’s own thunder.
I hope that there are many celebrations of Seattle Slew’s 35th Triple Crown win this year: this is a feat that should be celebrated often, and well. I will attend as many as possible, for I adore the horse, more than my humble words can describe.
One party that’s gonna rock: on the evening of July 20th, CAPTAIN Youth and Family Services will fete Slew and the Slew Crew, doing it up right. Black and yellow will greet guests at the Gideon Putnam Resort in Saratoga, and race fans will have the opportunity to meet and mingle with Slew Crewmen. Renowned artist, Brian T. Fox again will grace the gala with his presence–and the unveiling of a gorgeous new painting of Slew, on which he’s working even tonight.
If you love Seattle Slew–are you reading this, Ian?–you should plan to attend. Come, help us celebrate the otherworldly talents of Seattle Slew and the people who rode him all the way to the stars.
I believe that Slew invented the war dance, for he boogied into my very core that day in 1976, and never left. Happy, joyous, wonderful birthday in Heaven, Seattle Slew. We still love you; we celebrate you–and, in 2012–we will give you at least one party that’s worthy of your singularly beautiful name and legacy.
Happy Birthday, Dear Slew,
Happy Birthday, Dear Slew.
Happy Birthday, Seattle Slewwwwwwwww,
We all love you, too, Slew.
(Admit it: you sang it with me, didn’t you?)
😉
CAPTAIN Youth and Family Services/Seattle Slew gala:
www.captainyfs.org
Photo credits:
* Seattle Slew winner’s circle photo, courtesy of NYRA/Coglianese.
* Black-and-white photo, courtesy of New York Daily News.
* Belmont Stakes/Triple Crown cover photo, courtesy of Sports Illustrated.