Visit Saratoga.com For Everything Saratoga
Enter Giveaways Advertise
Note: Saratoga.com is not responsible for posts and comments written by non-staff members.
Home  »  Phish  »  We’re Proud of You, Jim!

Runaway Jim ran fourth in a field of eight yesterday, earning Seabrook Stable his third check (i.e. his keep for the month) in four starts and we open the condition book to see what’s next.

Sigh.  And that folks, is horse racing.

When we got to the paddock my nausea subsided the instant I saw him in the ring.

He looked great.  Just great.  His ears were up, he was walking happy and he knew that today he gets to play with his friends.

Can I just tell you what a great feeling it is to see that? 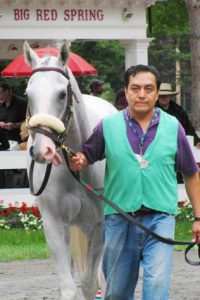 Years ago, an old friend of mine named Brian Mayfield, once told me “Patrick, my horses are happy and happy horses win horse races.”

No one could disagree with him and when I saw Jim yesterday, he sure as heck wasn’t going to get an argument out of me.

He circled a couple of times then he was saddled.  Number five on the program, Stacy saw it as a sign.

You see, she’s as die hard an Eagles fan as they come.  She loves McNabb.

Her brother Ken – a Jets fan, me – a Giants fan, joked like the Eagles he’ll go to the front, look unstoppable then, as they do, get caught in the end.

Moments after she grimaced at our failed attempts at humor, all thoughts of football went out the window for all of us.  ‘Cause baby, this is horse racing at the Spa and there ain’t no football game better than this. 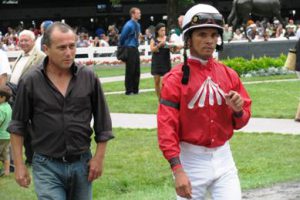 He’s had a tough meet at the Spa but he works hard, he rides hard and he’s as talented a jockey in a tough New York colony as you’ll ever find.  He came to us confident.

“I think today’s the day” he said, after seeing how good Jim looked in the paddock.

Whether jocks tell owners that or not in every race they have a shot, I don’t know.  But we were excited and so we were happy to believe him.

They break from the gate and he broke clean, initially.  A few steps out he got bounced around like a pinball in a machine.  But that’s to be expected.  That happens.

He sat chill off a decent pace, a bit slower than he’s seen in races past, and was in a good spot.

When they turned for home Lezcano put Jim in gear and he started to move, chasing the leaders.

Then, as they bunched up in the straight, I saw Lezcano stand up.

“%&*#” I thought to myself; or as I came to realize I thought out loud.  I’d like to apologize to those in the Clubhouse boxes who may have heard me.

I’d like to apologize to Tom Durkin on the roof, who probably heard me. 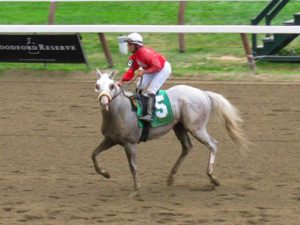 Something happened.  Either he got cut off or bumped.

His momentum got crushed.

Once settled Lezcano bore down and went to the stick, driving him as best he could.

The winners combined for an exacta that paid better than $600.

Jim got beat for third by a neck.

These aren’t excuses.  This, friends, is horse racing.

You never know what kind of trip they’ll get.

You never know where they’ll finish.

But you always hope for the best and you’re grateful for the opportunity to run.

Especially at the Spa.

*********
I have to make a note as to the Guest Services personnel at NYRA.  In both events when Jim ran and Stacy and I travelled the 200+ miles to watch, we were treated with amazing kindness and professionalism.

To make it clear the only people who knew she was an owner was the Director of Horsemen Relations.  It’s not like there was any kind of special treatment here.

Besides, it wouldn’t matter if she or I or any of us owned horses.  We were guests at Saratoga Race Course and they treated us wonderfully well.

There is nothing better when making a trip to the races and your tellers are smiling, happy to help you (not that I needed help with any racing terminology), your food and beverage vendors are thrilled to have the opportunity to wait on you and the guest services personnel are behaving in such a manner that we are doing THEM the favor of helping us when we have a question.

So, to all of you who work at NYRA taking care of us, my sincerest thanks to you all!

Back to Jim for a moment though.

Sure.  We ran fourth.  I admit I found a silver lining in not getting sick or passing out as a minor victory in the overall day.  But I would be less than honest if I didn’t also admit we were frustrated.

There is a huge difference in one’s mindset when you are in the money versus hitting the board.

Third would have been better, of course.

A clean trip would have been ideal.  Who knows the possibilities if he had one. 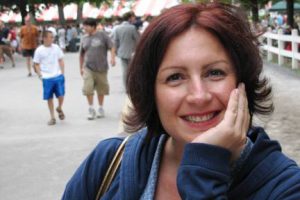 Stacy still managed to smile through it all.  She keeps a perspective on these things that I envy.

Dwelling on what could have been, or what we thought should have been, is pure foolishness.  A waste of time.  There is nothing that can be done about that now.

We do, however, remain grateful that he came back out of the race feeling fit, sound and happy; anxious to go again.  After all, that is what matters most.

…but the condition book was opened, I can promise you, before the horses hit the track for the fourth race.

We love you, Jim.  You’re our favorite!  Heck, that’s why we even made a Facebook page for you!