Visit Saratoga.com For Everything Saratoga
Enter Giveaways Advertise
Note: Saratoga.com is not responsible for posts and comments written by non-staff members.
Home  »  Horse Racing  »  For Love of the Game

Runaway Jim ran a game second Saturday afternoon and to be frank, neither Stacy nor I would have known the difference had he won.

It felt that good.  We felt that proud.  And by God I’ve never seen the woman look more beautiful.

At day’s end her handsome gray gelding left her gushing.  Absolutely, unequivocally garrulous – not her normal M.O. – and beyond overjoyed.

And that, ladies and gentlemen, is what the racing experience is all about.

The pride in your horse.  The thrill of the game.  The bright silks of your stable and family atop your horse, striding perfectly.  Running through his bridle and having the time of his life.

It is the undeniable and startling beauty of the Thoroughbred racehorse.

There ain’t nuttin’ like it no where, now how, no way. 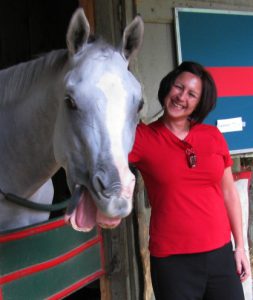 Stacy and I entered the day vowing, somewhat jokingly, we’d do everything opposite of what we’ve done before with regard to seeing Jim run.  In short, we decided to George Costanza our day.

Like I said, we took the Costanza approach and I’m here to tell you, baby it worked like a charm.

Some may wonder how in blazes anyone could get so excited about losing?!

BUT the truth is it isn’t about winning and losing when you’re involved in racing as an owner; or in my case, the boyfriend of one.  You certainly don’t enter the fray expecting to make money.

As a horseplayer?  Nothing else matters.

But in our case, in this instance, it has EVERYTHING to do with the experience of racing.  The stuff you used to hear the late Jim McKay and Jack Whitaker wax poetic about how grand the game is.  And here we are, a part of it.

Cliche as it sounds it actually is the thrill of watching your boy, or your filly, running their hearts out.

Although winless in five starts, and earning four checks overall, I assure you Jim has not failed anyone.  Ever. 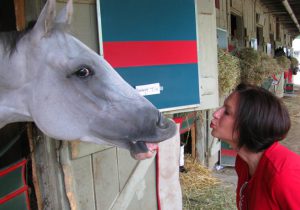 “Stacy’s got herself a real nice horse there,” my Dad told us from Monmouth last night.

“He’s a real honest horse,” he said.  “But when they hit the top of the stretch I thought he’d spit the bit.”

He started laughing, then continued “I even turned around and told your mother ‘he’s gonna spit the bit!’  But when he came on again and I saw that jock in front of him get into the winner some more, well, that’s when I knew.  That’s a real honest horse they have there.”

Is there a better compliment?

What, if anything, could anyone possibly want more than that?

So we played him across the board and cashed out.  We even made a few bucks for a handful of Stacy’s coworkers.

The ride home was different too.

We took Route 9 into Malta to get on the thruway instead of retracing our steps via Exit 14.  Why not?  After all, “opposite George” hadn’t failed us yet.

But if I am being candid, the real reason is I didn’t want to drive past the track one more time.  I don’t think I would have been able to handle it.  I didn’t want to leave Stacy holding the wheel while her boyfriend turned into a blubbering idiot.

It was partly because Jim had done so well.  We asked him time and again to Go Jim, Go!  And he did, every time and without complaint.  Such a good boy.  He (as of this writing) has over 180 Facebook friends! 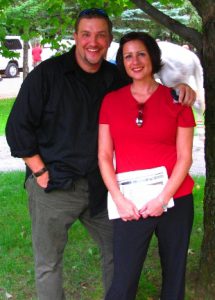 It was also in part because our Saratoga season ended.

But it was mostly because Stacy had given me more thrills, excitement and happiness at Saratoga than anyone ever has – and I trust ever could – in my adult life.

And all through this life – and this is the 100% truth – I never thought I could love anything or anyone the way I love Saratoga.  I’ll be dog-goned, that is no longer the case.

She is that good.  She makes me feel that proud.  And by God I’ve never seen a woman look more beautiful.

The fact she races a NY-bred ain’t hurtin’ my feelings either.