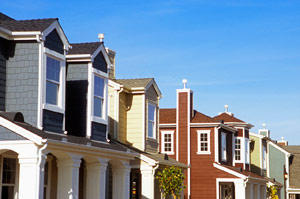 So you want to move to Saratoga... Well who doesn't? With its rich history, beautiful scenery, dynamic downtown, and much more, Saratoga is a great place to live.

Within Saratoga, there are many different types of neighborhoods. These areas are defined chiefly by geographic location and property layout. For those looking to move to Saratoga knowing these neighborhoods is the first step towards finding your new house.

This could be confusing, but luckily Saratoga.com has got you covered! We examined the different types of neighborhoods described them in our handy guide below. You can also check out the Saratoga Real Estate Guide!

Saratoga's East Side loosely refers to the area on the east side of Broadway. The homes in this area are traditional, ranging from colonial to mission in style. This area is perfect for families with kids as most houses have lovely backyards and front lawns. Many different elementary schools are located in the East Side neighborhoods, including Lake Avenue, St. Clement's, Caroline Street, and the Waldorf School.

Saratoga's West Side is the area to the west of downtown and Broadway. The homes in this area are generally more tightly packed together than the East Side with smaller lawns, but many are still lovely homes. Many houses in this district are cottages or multi-family homes. Saratoga Springs' High School is conveniently located on the West Side as well as the West Side Rec, home to popular playgrounds and basketball courts.

Gracious and traditional mansions are the centerpieces of these historic neighborhoods. The sprawling lawns and beautiful facades of these houses make them a popular destination for tourists to view, and joggers to run by. You CAN live there though, but you will have to keep a close eye on the market for these homes, as there is rarely new construction in these neighborhoods. Skidmore College is located right by the North Broadway homes and the Saratoga Race Track is located on Union Avenue.

Wilton is a large residential community located just outside of the city limits. The Town of Wilton is home to the Wilton Mall and main commercial shopping district of the Saratoga Area as well as a satellite campus of SUNY Adirondack. More importantly it is the location of many different homes in its expansive development. Wilton is a wonderful community for families with kids of any age.

Many chose to settle outside Saratoga Springs in one of many surrounding towns and villages. Greenfield Center, Schuylerville, Malta, and others are all popular spots for people looking to relocate to Saratoga. Settling outside of Saratoga offers residents opportunities for construction, smaller, more personal schools, and a heightened sense of community.

Saratoga is also a great place for those who wish to ease into owning their own home or those who don't want all the responsibilities that come along with owning a larger home. Saratoga has many beautiful condominiums and townhouses that are conveniently located around town. There's luxury living downtown overlooking Congress Park, or the popular condos on High Rock Ave, right by the Farmers Market! There are also townhouse and apartment communities located all around town.