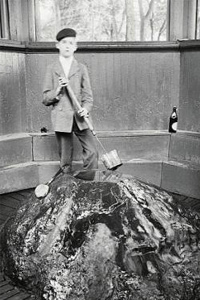 Saratoga Springs celebrated its Centennial in 2015 with many commemorative events and projects.

History Of The City

What is now Saratoga Springs has a known history spanning back to the 1770s. Many pioneers passed through the High Rock area, including General George Washington who drank from the High Rock Spring in 1783, but the first permanent resident is considered to be Alexander Bryan who decided to call the area "home" in 1787.

Meanwhile, Gideon and Doanda Putnam arrived in the Lower Village in 1789 and opened a Tavern and Boarding House in 1802 after the discovery of Congress Spring. It was Putnam who built Broadstreet, which would later become Broadway, as well as many iconic buildings, including the Grand Union and Congress Hall.