SARATOGA SPRINGS – On September 5th, Saratoga natives Daniel Stalter and Reed Olsen launched a Kickstarter campaign for the 130-page graphic novel collecting the first four chapters of their series Dream Crasher. The Sci-Fi Horror series tells the story of a group of children who survive a bizarre cataclysmic event, and are forced to contend with angry ghosts, beasts made from human parts, and interdimensional parasites that want to feed on their dreams. As of today, the campaign has already reached over half of its goal of $4500. This amount covers a print run of 500 copies, as well as the costs of lettering the comic and shipping out the various rewards. If the campaign hits its stretch goal of $7,000 they will double the print run. The campaign will be running until October 6th, 2017.

The duo ran a successful Kickstarter back in March 2016 to print the first 33-page chapter of the series, and have since self-funded two smaller print runs of the second and third installments. Now they are gearing up to collect the first four chapters into a single volume graphic novel. “Our fourth chapter turned into a double issue, and would have cost a lot to print by itself” explained series writer Daniel Stalter. “The reality of the situation is that collected trades have a greater reach and a longer shelf life than single issues. The first 4 chapters tell a complete story arc, and make for a natural beat change in the story. We will still release single chapters digitally, but from here on out in the series we will only be printing 4-chapter volumes.” There are 3 volumes (12 chapters total) planned for the entire series.

This has been a passion project of Daniel and Reed’s for the last seven years, which all began as a conversation between two recent college graduates in downtown Saratoga. It took five years from breaking ground to publishing the first chapter. “We had to make some difficult decisions, but pain is temporary” said series artist Reed Olsen. “I’m glad we re-did the first chapter and took the time to get it right.” Daniel added “We had no idea what were were doing when we first started out. There were numerous personal and creative setbacks along the way, but we persevered. Both of us could have quietly walked away at any point, and no one would have noticed, but we didn’t.”

Since the success of their first Kickstarter, Daniel and Reed have taken their story to more than ten conventions across the northeast. Reed made their west-coast debut at Rose City Comic Con in Portland, Oregon, just last weekend and Daniel will be taking it to Baltimore Comic Con in two weeks. Their work has been praised in publications such as Comicbooked.com and the upstate New York based For the Love of Indie podcast. “It’s a lot of work, but we truly believe in this story” said Daniel, in reference to both the conventions and the ongoing Kickstarter. Reed added, we just have to remember that it’s a marathon, and not a sprint.” 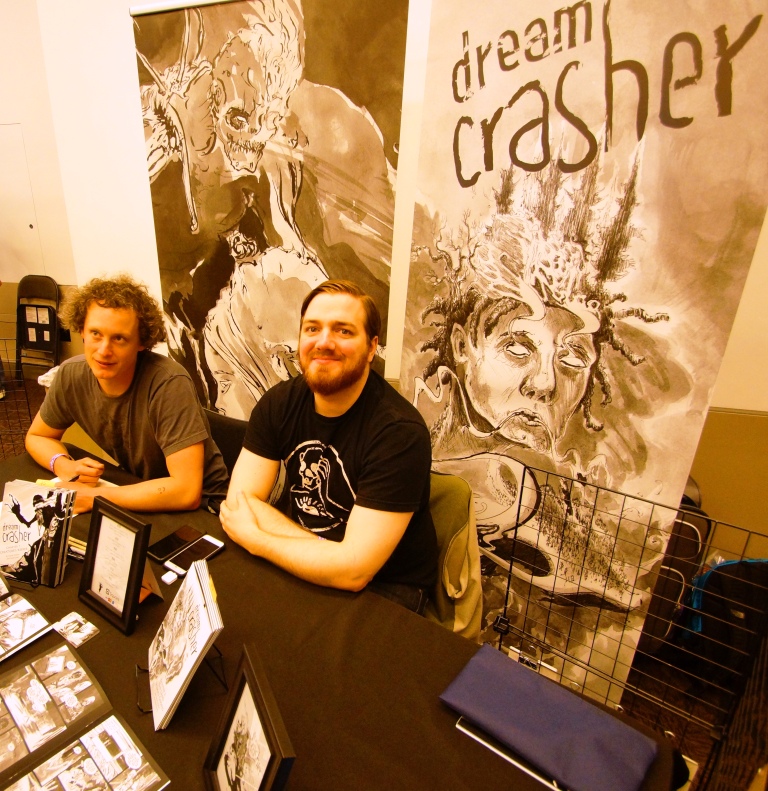 Kickstarter is a way for supporters to directly fund the printing efforts, which is a large upfront expense for anyone who is self publishing. There are several levels of rewards each backer will get to choose from, depending on how much the pledge. For as little as $4, backers can get digital copies of the first two chapters. The most popular rewards are $18 for the digital copy of Volume One and $25 for the print edition. There are also several pieces of original artwork for the series available for those willing to back at $100 or more, including a commissioned piece of artwork from Reed. Shipping on all rewards is slated for early 2018. The creators do not get any of the money unless their entire goal is met.

For more information, and to help fund the project, visit: This Kickstarter site.