Visit Saratoga.com For Everything Saratoga
Enter Giveaways Advertise
Note: Saratoga.com is not responsible for posts and comments written by non-staff members.
Home  »  food  »  Make It A Double! My ‘Night on Bourbon Street’

Editor’s Note: Mandy Mittler has returned from Bourbon St. by way of a well-deserved vacation in Niagara Falls. Her dispatch is worth waiting for – as usual. The first post, with a large gallery, is here. I’ll have a double! – AG 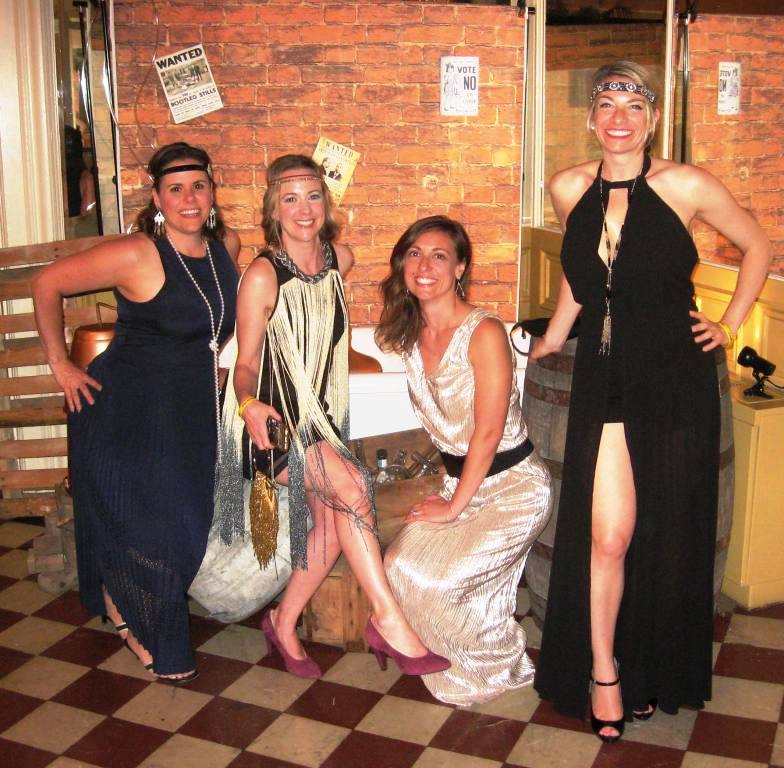 SARATOGA SPRINGS – Freihofer’s Saratoga Jazz Festival kicked off their first ever speakeasy, ‘A Night on Bourbon Street,’ outside of the perfectly chosen Canfield Casino, on Friday, June 22. For this event, partygoers were encouraged to don their “flapper best.” 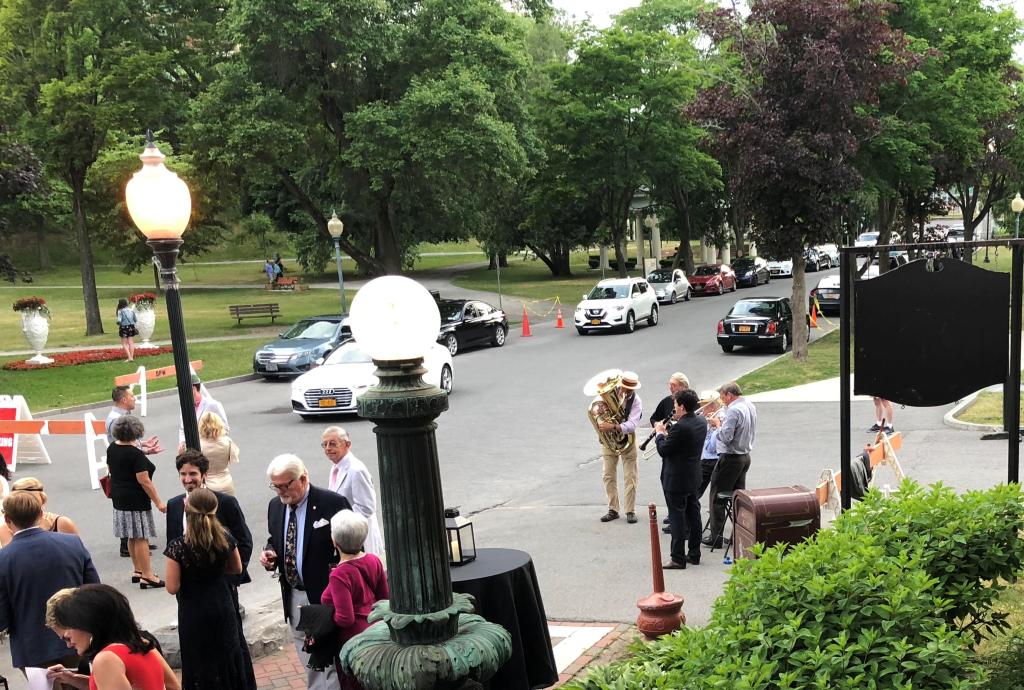 As I approached the outside of the Casino, fringe, feathers, and fedoras mingled with the smooth sounds of a lively 5-piece jazz ensemble. The jazz band was so full of life that I fully expected them to start marching towards Broadway, blowing their trombones and tubas while rapidly strumming their banjos. Instead this combination of players from near and far blessed my ears for the next hour and then strategically throughout the night.

As I enjoyed the live music and my company, wait staff came around with champagne flutes and passed hors d’oeuvers. Two favorites were snow peas stuffed with crab meat, and goat cheese stuffed dates wrapped in bacon. 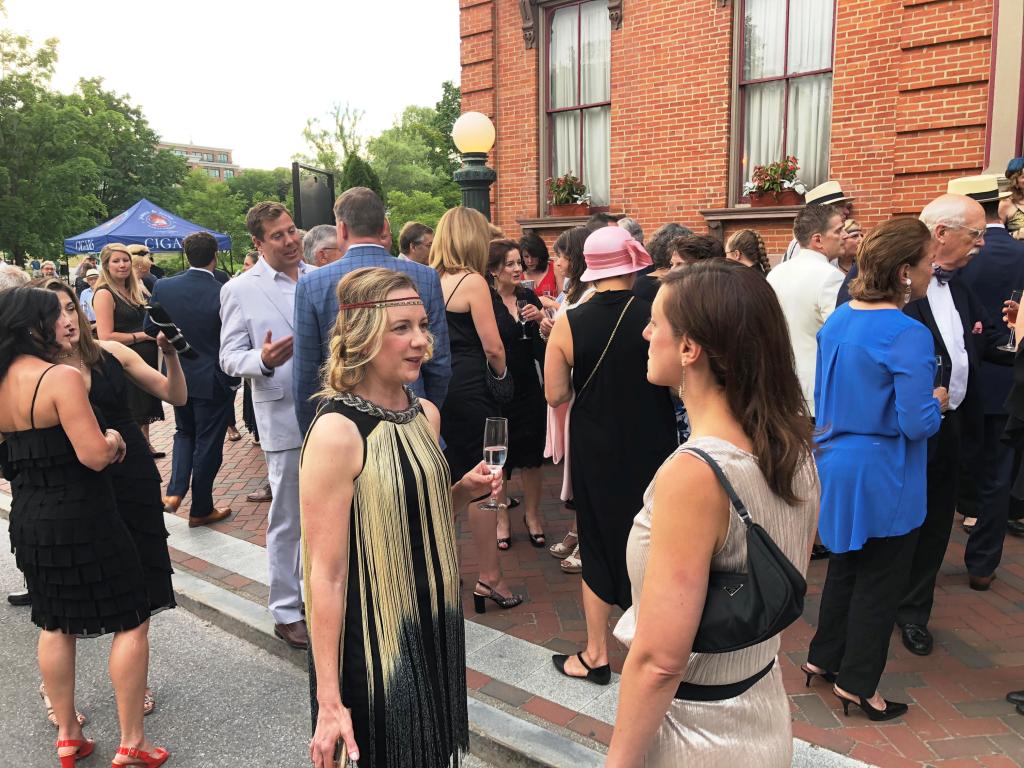 Once ushered inside, guests were treated to “500 dollars worth of poker chips” which could be played at either the roulette, blackjack, or poker tables. Lucky winners were able to leave the casino with a variety of wonderful SPAC prizes such as, 2 tickets to the New York City Ballet or 2 Saturday Grand Tasting general admission tickets for the 2018 Saratoga Wine and food festival. 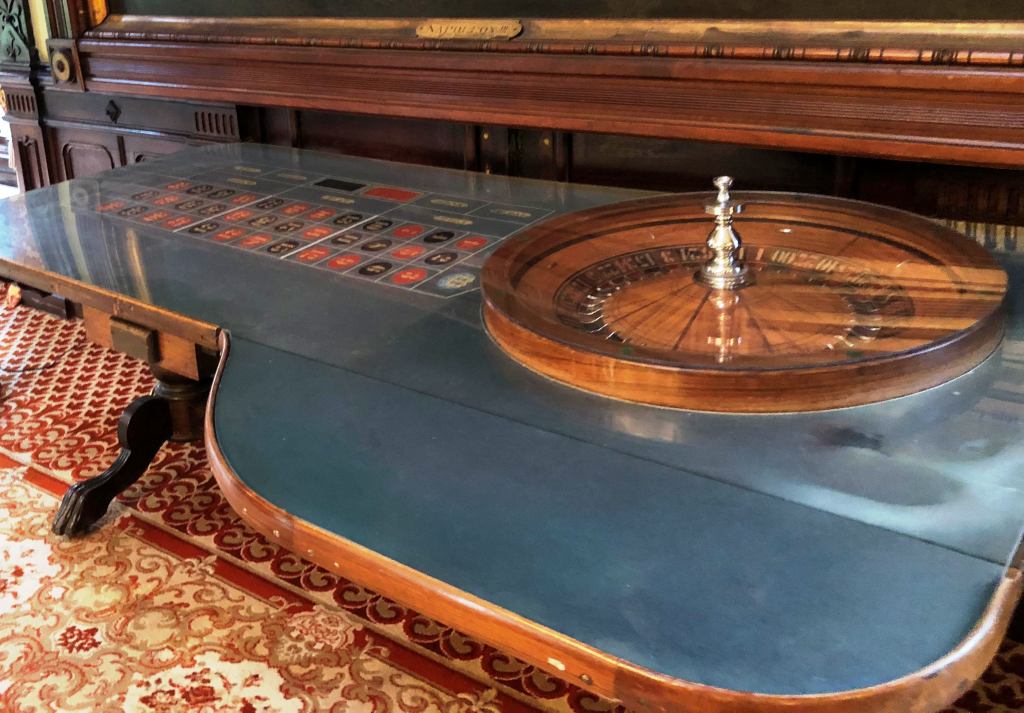 I am pleased to report that this first time roulette player was able to leave the night with 2 tickets to the opera. My strategy…all on red. 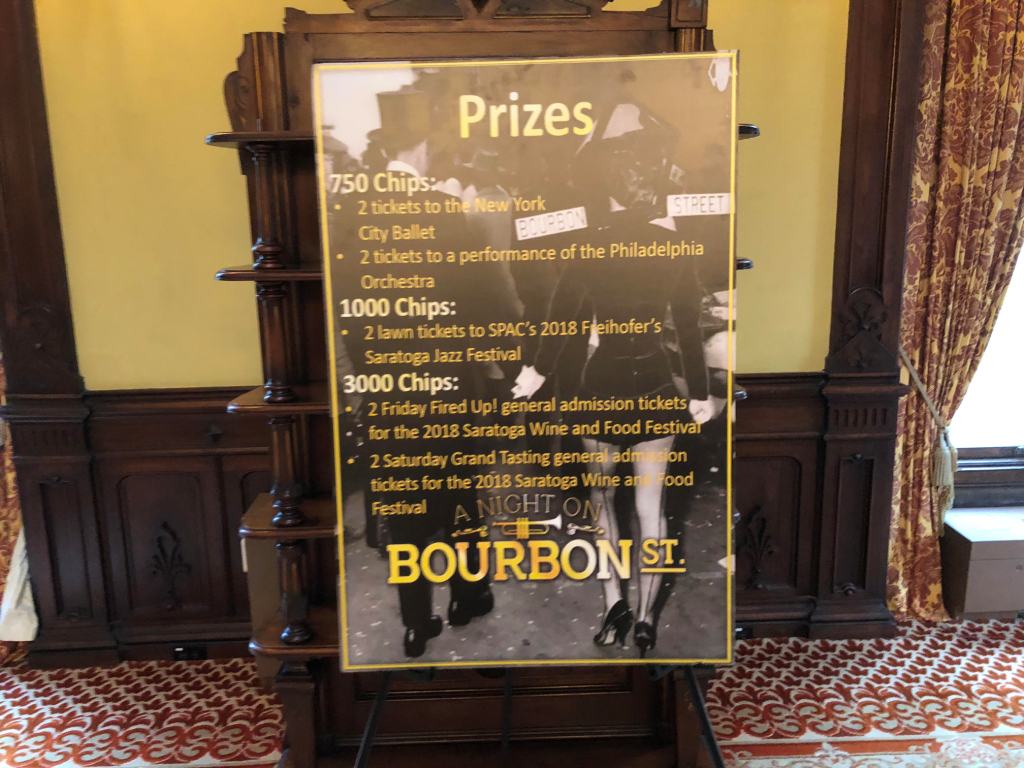 In between the shouts from winners and sultry live jazz music, laughter could be heard at the open bar as guests sipped the signature drinks of the night, the Sazerac, Cajun Lemonade, and Bathtub Gin. I sampled the Sazerac, which was the perfect combination of sugar, Peychaud’s bitters, and Sazerac Rye Whiskey. It was music to my mouth. 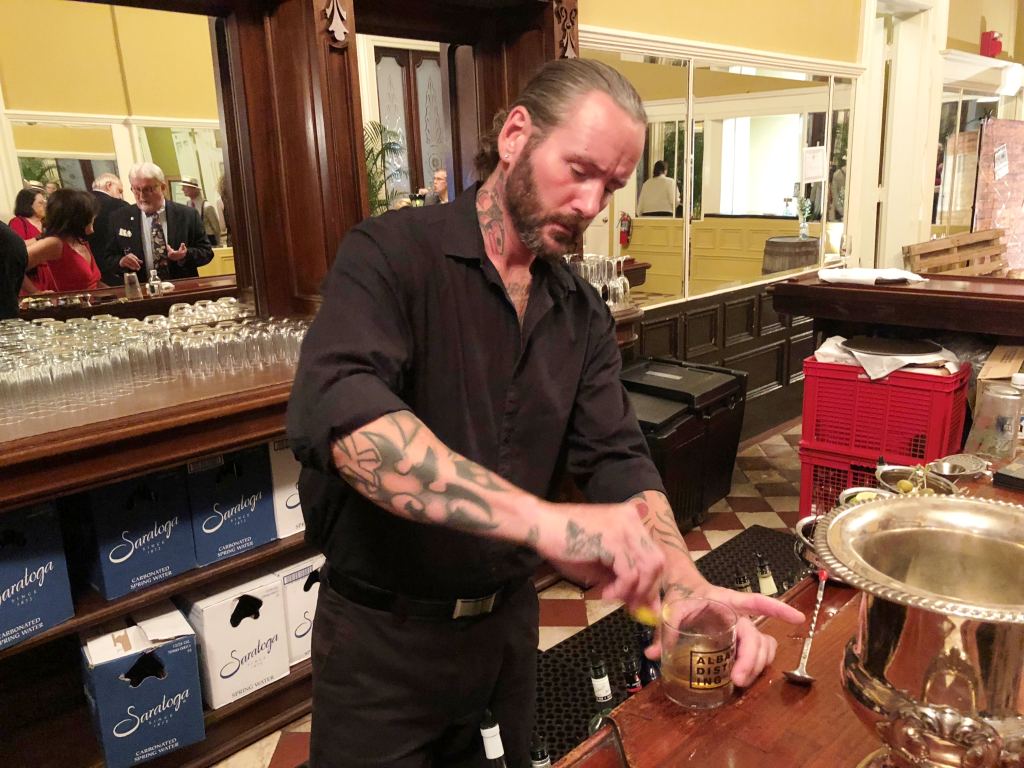 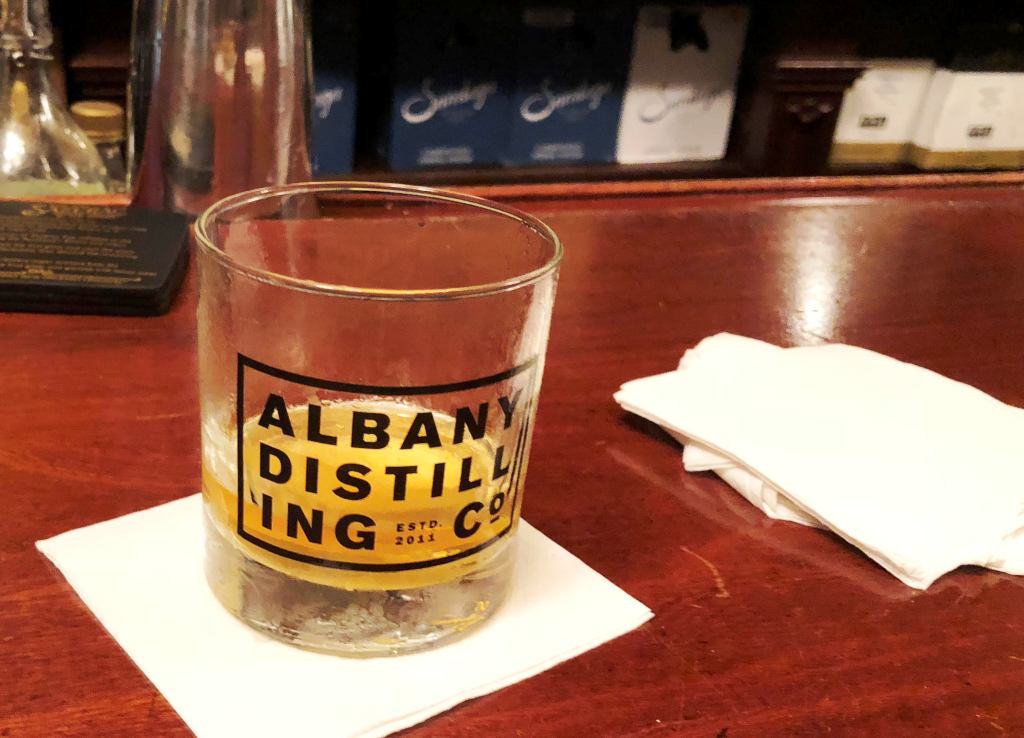 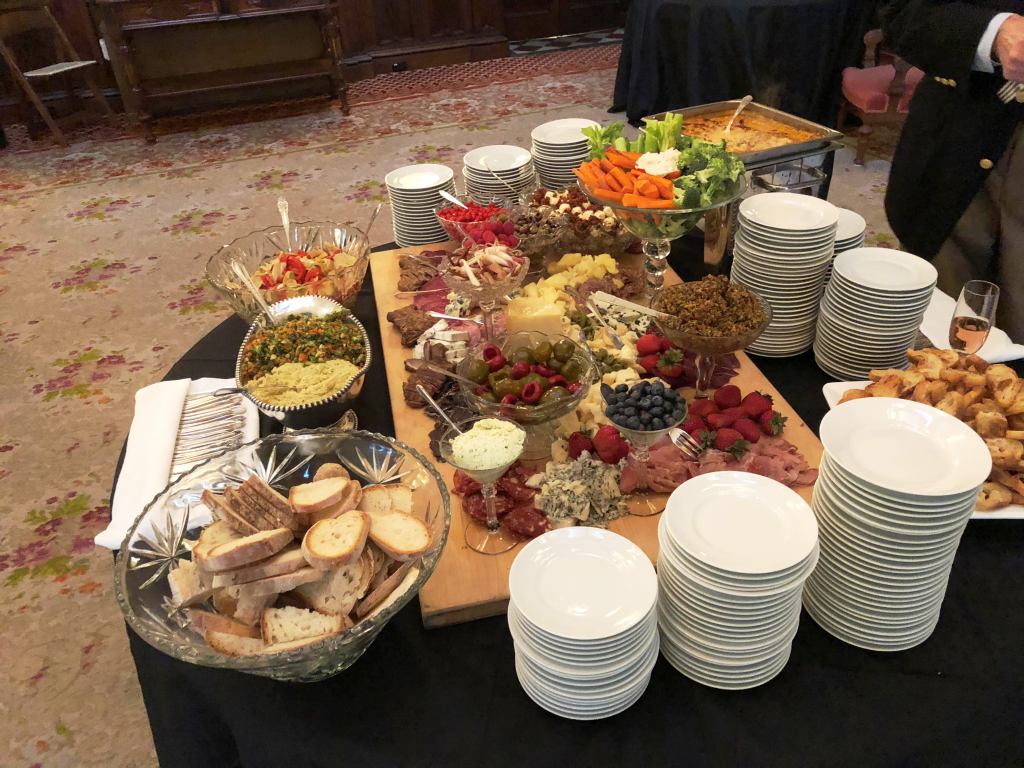 Although ‘A Night on Bourbon Street’ primarily celebrated the music, the food presented by Kim Klopstock from Lily and the Rose deserves its own high praise. The crudities table was brimming with tapenades, various sliced meats, and a plethora of cheeses. Once inside, revelers were treated to a sit down New Orleans dinner or a buffet. As we munched and ‘mmm’ed’- the headliner of the night, Bria Skonberg – took the stage. I must pause to say, if you were not able to attend A Night on Bourbon Street – you must make it a point to find Bria wherever she is playing and go see her. 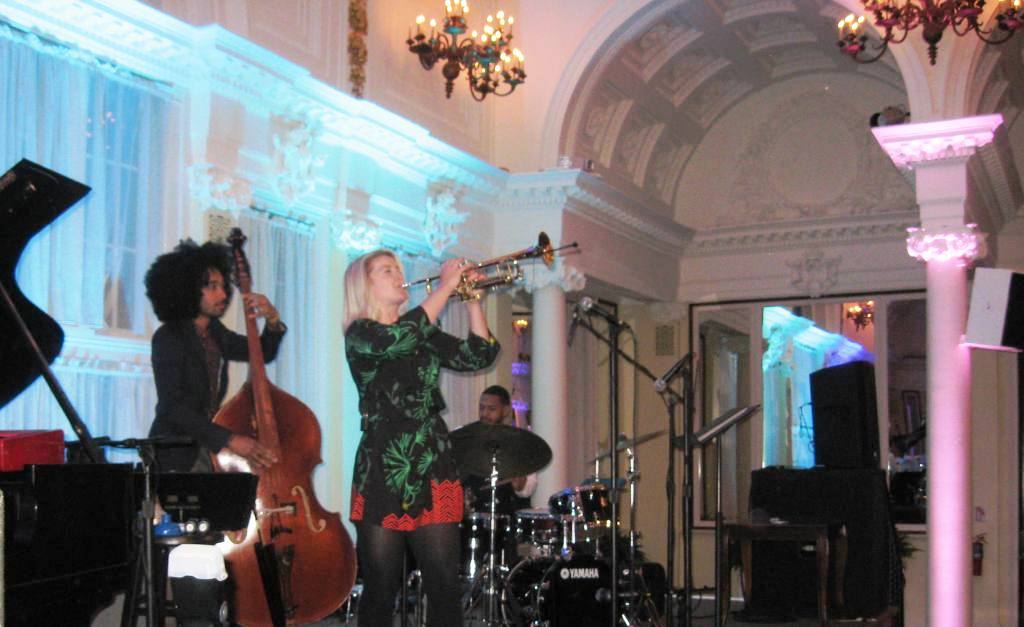 As soon as she stepped in front of her now devoted followers, we were mesmerized by her soulfulness and ease. She moved between instruments and vocals, leaving her mark on Saratoga within a matter of minutes. 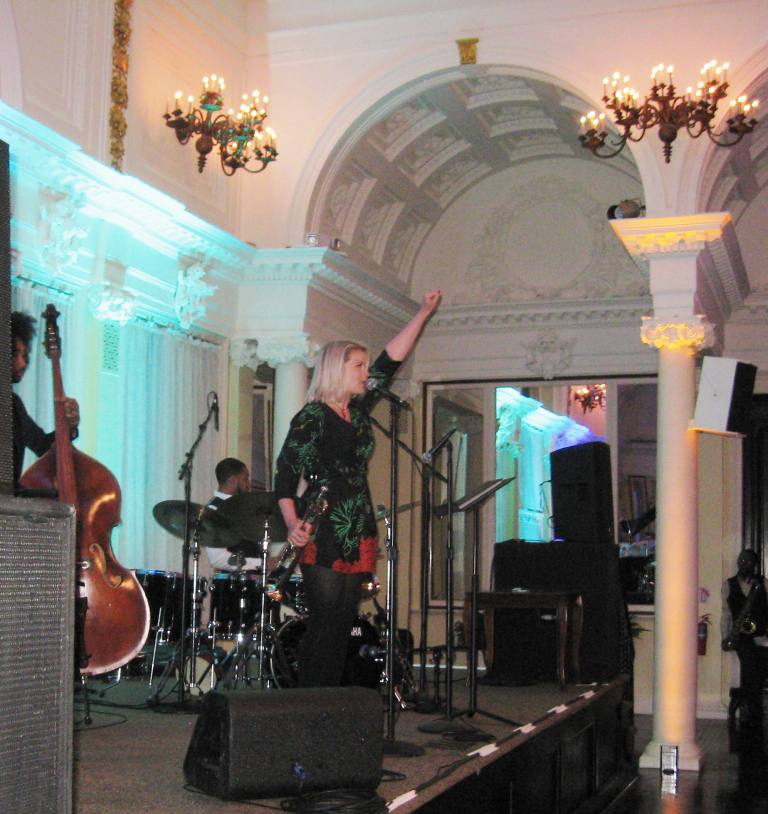 While applauding and swaying to Bria, I turned to my right and I found my cherry on top – whose name is David Winograd. David was part of the night’s amazing makeshift jazz ensemble playing the upright/electric basses and tuba. 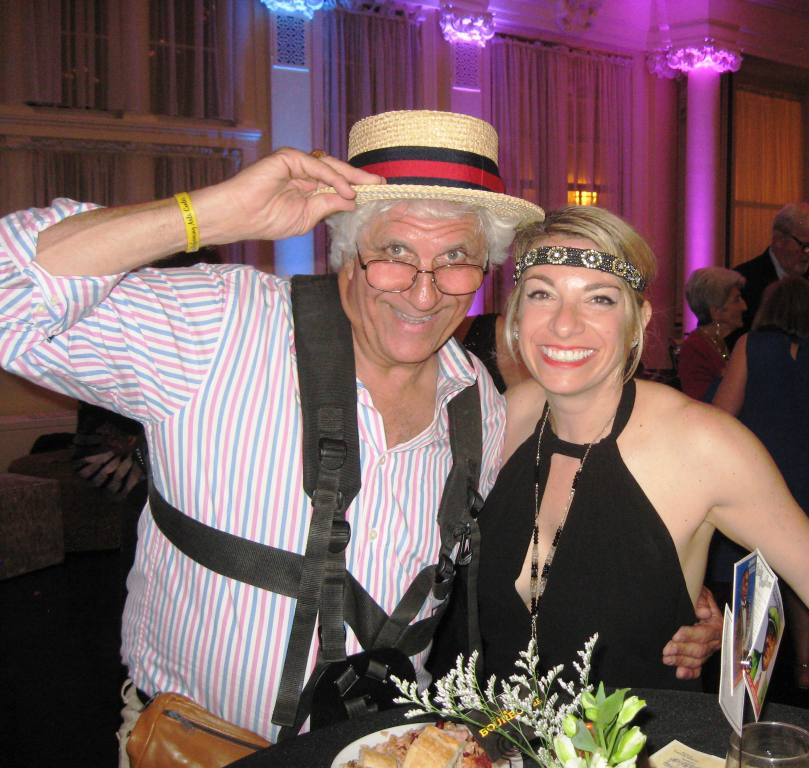 As David and I exchanged pleasantries we found our 3 degrees of separation, realizing that when I went to the Catskills for our annual family summer vacation, David was there doing what he loved – playing for the crowd which included my family!

David was so passionate and shared his thoughts on this night and jazz. He stated that jazz is so spontaneous and of the moment. Listeners never know what is going to happen next. This unpredictability is what makes jazz one of America’s greatest gifts to the arts. 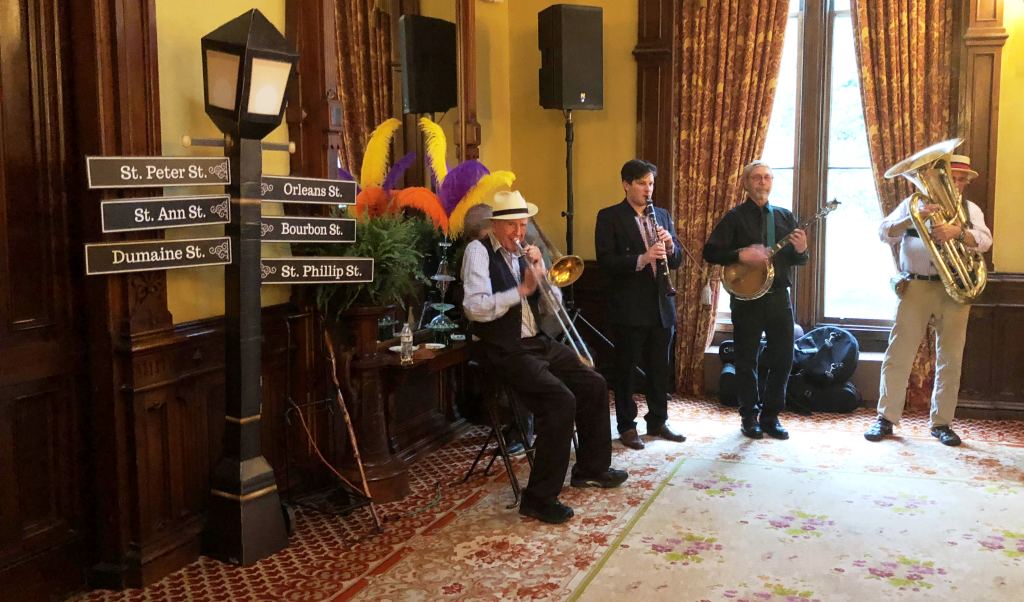 Our very own Jonathan Greene from Hot Club of Saratoga could not agree more as he entered our conversation before pulling David away for their next set.

Although there was no dance floor, people found room throughout the night to move to the rhythm, and feel what has helped put Saratoga on the map, health, history, horses and THE ARTS! Thank you Saratoga Performing Arts Center, Freihofer’s, and SPAC’s Action Council, for bringing to Saratoga a unique event filled with culture and sound. 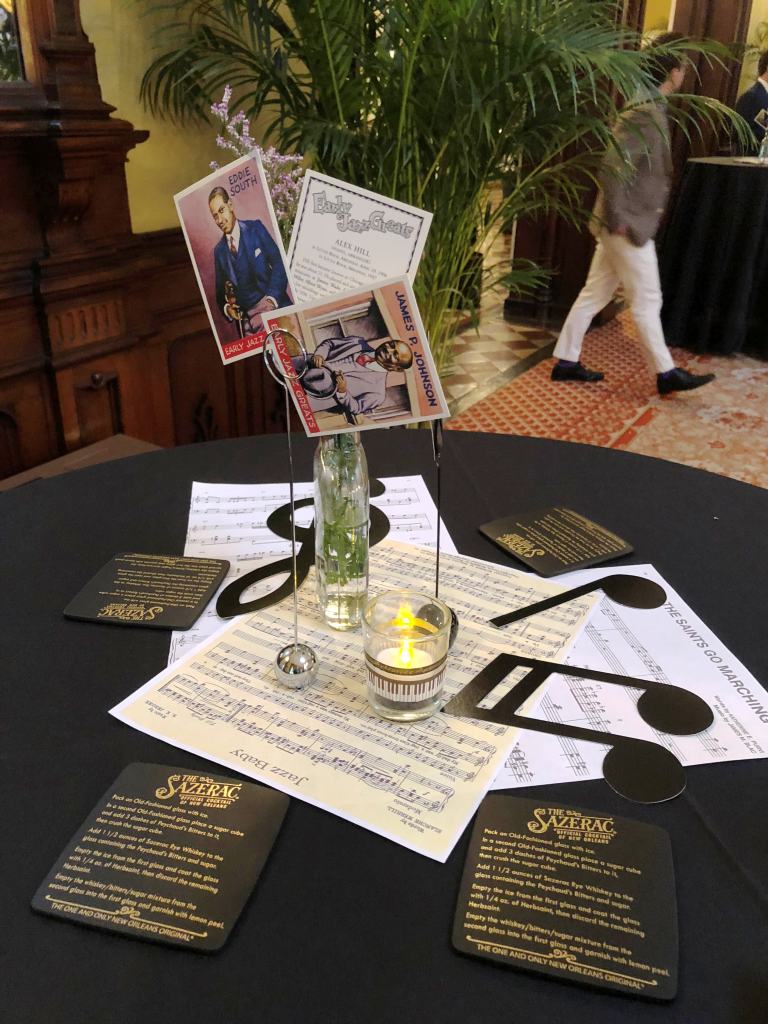