March Maple Madness in the Town of Thurman 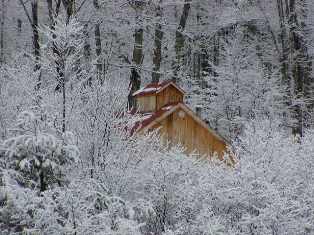 It all begins on one of those special days in late winter, when snowmelt hammers on the porch roof, the sun seems higher in the sky, the air has an unmistakable smell of spring, and crows caw over the meadow. In Thurman, folks wait all winter for days like that. On days like that, the maple sap is running.

The tiny Warren County town of Thurman boasts a proliferation of maple producers – probably more per square mile than anywhere else around. Most are second- or third-generation sugar makers, carrying on a proud family tradition of maple production, using a combination of learned-at-the knee know-how and an ongoing quest for technology to streamline their operations and make them energy- and labor-efficient. Many recall a grandparent carrying buckets with a yoke to a kettle over an open fire. Some will share memories of two or three generations of their family working together to gather, boil and bottle.

These days the iron kettles are replaced by old or new evaporator pans, and most buckets have given way to plastic tubing. Some producers still lean toward tradition, while some have gone high tech. The degree to which each has embraced technology varies, but all are passionate, and all agree that sugaring is an addiction.

It must be. They swap battle stories of scrambling up ice-glazed slopes with crampons in sub-zero temperatures to string tubing. They tell of early years of making do with marginal equipment that worked poorly or failed at critical moments, of sugarhouses catching fire (and of sacrificing all of the day’s sap to douse the fire). They brag about standing over a steaming evaporator for so many hours that they literally fell asleep on their feet. Why would any sane person do that? Addiction. Charlie Metzger, a
self-confessed sugaring junkie, doesn’t tap as many trees as he used to, but when that snow begins melting off the roof, his pulse quickens, and he heads to the woods to collect at least enough nectar to boil down for family and friends. Charlie laughs. “Remember, old sugar makers never die; they just evaporate.”

Sugar makers tell funny and heart-warming stories. Randy Galusha of Toad Hill Maple Farm reminisces about how he and his brother launched that business by hanging three coffee cans on a maple in their yard when they were kids in the ’70s. Their dad, intending to just “help” them, got hooked on sugaring, too, and, before they knew it, the family had a full-fledged operation in the works–one that Randy and his wife Jill run today, said to be the biggest in Warren County. Randy remembers one year when his little brother waded day after day through waist-deep snow to check one particular sap pail, each time finding it empty. Finally Ted Kenyon, their mentor, confessed that he’d duped them into tapping a soft maple, and that there would never be any sap in that pail.

Mike Hill grew up in a converted one-room schoolhouse in Warrensburg, where he started sugaring with his parents, using equipment donated by relatives. But where to boil? Mike recalls, “Well, the schoolhouse had a four-holer, which must have been a luxury at the time. It made just a perfect sugarhouse. Not too many sugar makers can say their first sugarhouse was an old outhouse.” Now he boils with Ralph Senecal in a state- of-the-art facility, Thurman’s Valley Road Maple Farm. They pride themselves on their light amber syrup, named best in Vermont’s International Maple Syrup Contest, and their candies, which walked away with a blue ribbon at the New York State Fair in 2008. Valley Road Maple has invested in a reverse osmosis machine that extracts 75% of the water content from the sap before it is boiled, saving fuel and boiling time.

Charlie Wallace and his dad used to sugar with the legendary Hollis Combs, who tapped and boiled into his ninth decade. Now the Wallaces sugar on Dippikill Road, and many beat a path to their door to buy traditional dark syrup, the kind Hollis used to make and old-timers call “real” maple syrup.

Cheryl and Marc Kenyon operate Adirondack Gold Maple Farm, an outgrowth of the sugaring carried on by Marc’s dad, Don, and his father, Oscar. Marc and Cheryl have built a new sugarhouse and modernized a bit, but you’ll still find a wood-fired evaporator there, and old fashioned hospitality that would make Oscar proud.

On Saturday, March 14th, Thurman begins a three-week-end celebration of all things maple with open sugarhouses, demonstrations, samples, sales and special activities. Also participating is Martin’s Lumber, where Gary and Wini Martin will show off the beautiful grain and interesting characteristics of their maple lumber, like the telltale marks left by taps placed in the tree in bygone days. Gary will demonstrate his saw mill and explain the principles of sustainable forestry that will maintain his forest to serve generations to come.

Crowning that first Maple Weekend is the March 14th Maple Sugar Party, beginning at 4 p.m. and running till all are served at the town hall. There’s live music and an incredible home-cooked buffet topped off by a dessert of old-fashioned jack wax, sometimes called “sugar-on-snow.” You haven’t tasted maple until you’ve tried swirling gooey, chewy jack wax around your fork and maneuvering it into your mouth.

The Maple Sugar Party here dates back to 1959, when the community held one to raise money for a local family fighting to save a son with leukemia. The dinners have continued ever since, drawing people from miles around to celebrate the running of the sap and continue the fight against cancer. A succession of women have simmered the jack wax. Jean Reynolds, took over the job after Alice Parker stepped down in her senior years. She said the dinner has its challenges. “We’ve had blizzards, ice storms, floods, roads closed, detours, and have even lost electric power. … But you know, every year things work out, and it’s a success.” Due to Jean’s ill health a few years ago, Helen Baker stepped up to carry on the Maple Sugar Party, learning from Jean the secret of boiling syrup to just the right consistency. Now the spring maple ritual has expanded to include the March Maple Weekends.

The open houses run from 10 a.m. till 4 p.m., but early birds will flock to Valley Road Maple Farm for fluffy pancakes, drizzled with pure maple syrup, beginning at 9. Cheryl Kenyon, chairman of Maple Weekends in Thurman, says special plans for the weekends are still developing, and urges visitors to check the website for maps (also available around the area) and updates. Follow links from www.Thurman-NY.com.

About the author: Persis (“Perky”) Granger is a cheerleader for the town, which she has called home for over thirty years. She has written two historical novels set in Thurman in the 1890s, “Adirondack Gold,” and its sequel, “A Summer of Strangers.” She hosts the Adirondack Mountain Writers’ Retreat, August 20-23, 2009. Learn more: www.PersisGranger.com. 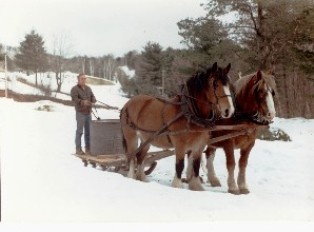 From Northway exit 23 (Warrensburg), proceed north on Rt. 9, left on Rt. 418, over and along and back
over the river for 3.5 miles to Athol Road on the right. Take Athol Road and follow Maple signs.