Visit Notable Graves in the Saratoga Region This Halloween

Looking for a new activity to add to your fall traditions along with carving pumpkins and attending seasonal events? Take yourself on a leisurely tour through one or more Saratoga cemeteries to visit noteworthy graves. Some of these individuals led extraordinary lives, others suffered unusual deaths, but they're all memorable in one way or another, and honored in their afterlives in Saratoga.

Most of the remarkable graves listed below are in Greenridge Cemetery in Saratoga Springs, but we included a few in nearby cemeteries as well. Keep reading to find out which graves to keep a lookout for this Halloween, and scroll to the bottom for gravesite etiquette and an upcoming cemetery tour.

Graves Worth Visiting in Greenridge Cemetery 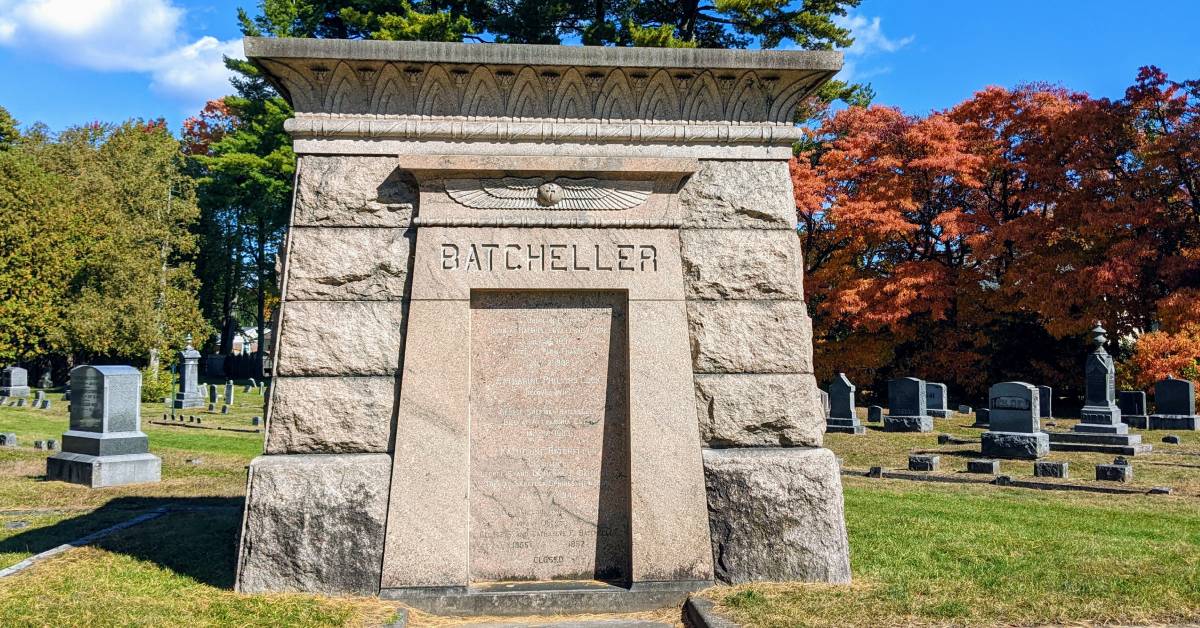 George Sherman Batcheller: The Force Behind One of Saratoga’s Most Haunted Places

The grand Batcheller Mansion Inn is considered one of the most haunted spots in Saratoga, although reportedly it’s George Sherman Batcheller’s daughter who primarily haunts the now bed and breakfast. Batcheller had the elaborate mansion built in 1873 by the Albany-based Nichols & Halcott.

George Sherman Batcheller was a Civil War soldier and Harvard-trained lawyer who was elected to the New York State Assembly at just 21 years old. In 1875 President Ulysses S. Grant appointed him to serve as an American judge in the newly formed International Tribunal in Egypt; Grant later was a guest at the Batcheller Mansion Inn.

Appropriately, Batcheller and his wife Catherine are buried in an Egyptian-style mausoleum. Their resting place has the stunning architecture you would expect from the person who thought to create the Batcheller Mansion Inn.

Sam Hildreth: An Incredible Horse Trainer Who Fraternized With Outlaws

You can’t list notable graves in Saratoga without mentioning at least one individual connected to the horse racing industry. Sam Hildreth was one of the sport’s most interesting personalities, according to the National Museum of Racing. Hildreth had his eyes on a jockey career in his early days, but grew too big, and ended up a skilled trainer.

Hildreth’s first of many solid victories was the 1899 Belmont Stakes with the William C. Whitney-owned Jean Bereaud. Unfortunately, the owner/trainer relationship soured quickly after that, with rumors of a drunken Hildreth attacking fellow trainer John E. Madden with a walking stick.

Hildreth had a reputation not only as a great trainer, but for drinking, brawling, and keeping the company of outlaws. He did get sober later in his life, and was reportedly always kind to the horses. Hildreth was inducted into the Hall of Fame in 1955. 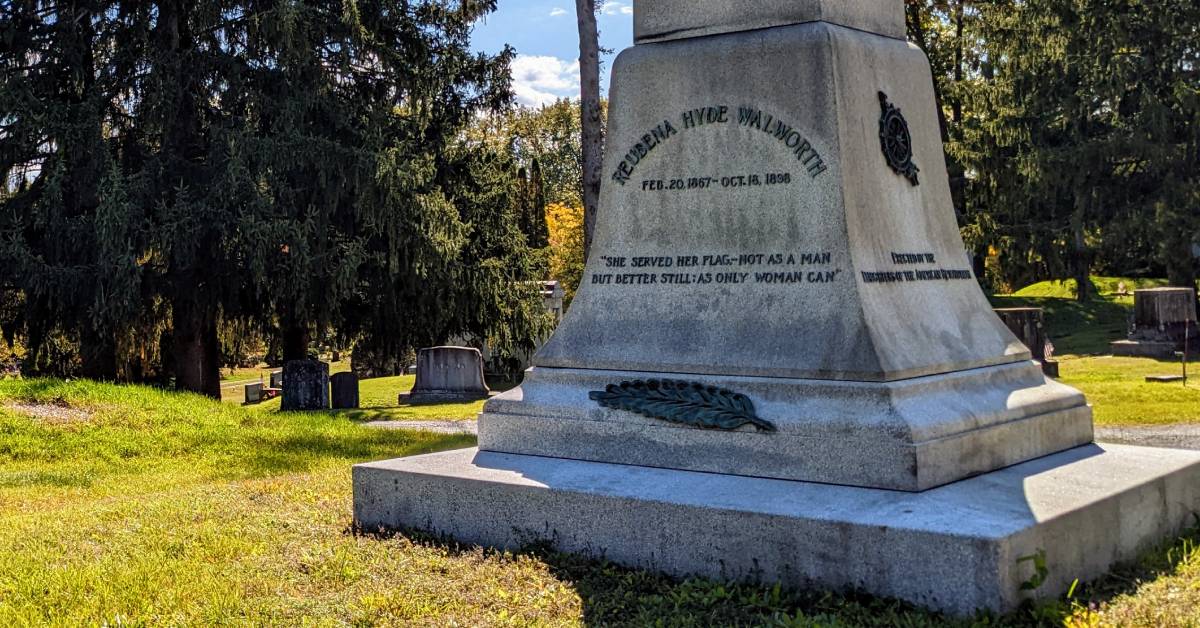 Reubena Hyde Walworth, or Ruby, touched the lives of many veterans before her untimely death from typhoid fever at the age of 31. Her grandfather and the person she was named for, Reuben Hyde Walworth, was a New York State chancellor, the highest judicial position in the state at the time; the Walworths were a prominent Saratoga Springs family.

When the Spanish War started in 1898, Ruby wanted to join as a soldier but was forbidden. So she studied to be a nurse at Saratoga Hospital and in a short time was able to go to Camp Wikoff in Long Island, a hospital camp where soldiers were quarantined after fighting in Cuba. About 80% of the soldiers were sick with diphtheria, yellow fever, or typhoid fever. In many cases Ruby’s was the last face soldiers saw before they died. She too, ended up perishing from one of the infectious diseases.

Ruby’s mother Ellen Hardin Walworth (also buried at Greenridge Cemetery) never let her daughter’s legacy be forgotten. Ellen was one of the founders of the Daughters of American Revolution, and 1899, a 41-foot granite monument was memorialized at the cemetery in her honor. The monument was refurbished in 2011.

George Bolster: A Photographer Who Chronicled Saratoga Life in the Early to Mid 1900s

The most recent death on this list of notable graves to visit, George Bolster was a prominent Saratoga photographer. He took over the photography businesses of another reputable professional, Henry B. Settle, in 1950.

Today the George S. Bolster Collection of pictures that depicts life in Saratoga between 1855 and 1980 belongs to the Saratoga Springs History Museum. About three-quarters of the photos are Bolster’s, and the rest are from other Saratoga photographers. 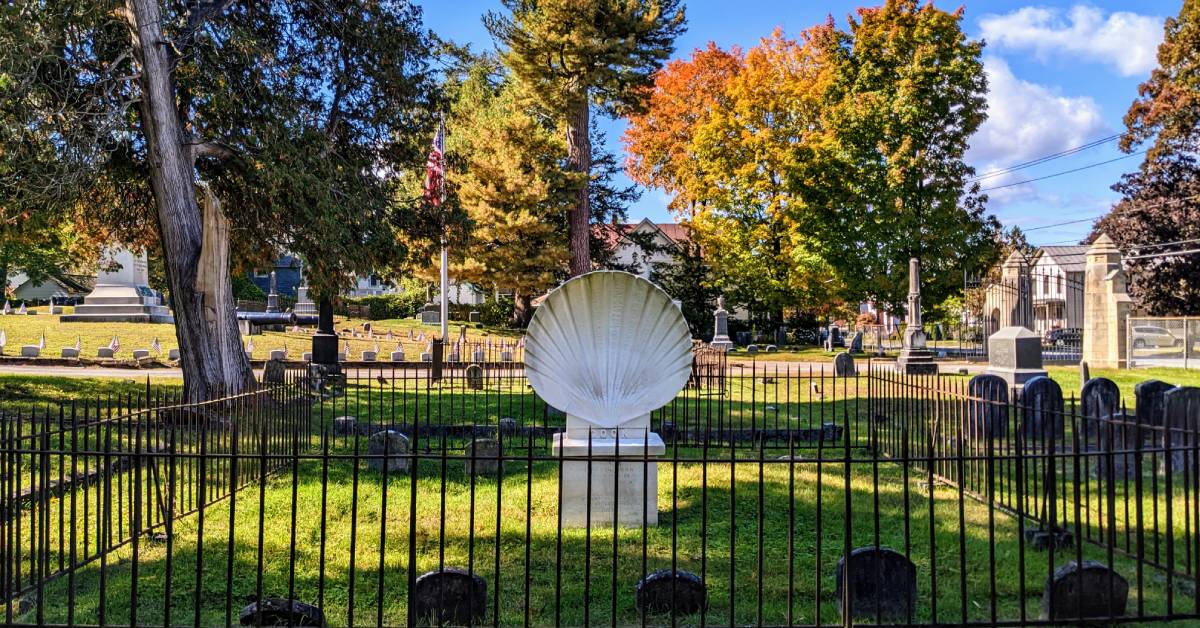 Ransom Cook: A Warden/Inventor Who Designed His Own Gravestone

Ransom Cook not only designed his own giant seashell-shaped grave, which depicts the names of other family members as well as his own, but he has a significant connection to the Clinton County Correctional Facility. Some may remember the famous prisoner escape from that Adirondack prison in 2015.

Back in 1842, Ransom Cook was asked by the New York State government to build a new type of prison that utilized inmates for labor. He personally decided on the location and oversaw construction, and was declared warden in 1845. Cook reportedly brought about a kinder, more humane treatment of inmates that was in stark contrast to other prisons at the time.

In addition to life as a warden, Cook was an inventor, most notably of the Cook auger, a spiral shaped tool used for drilling.

Kathryn H. Starbuck was a lawyer, suffragette, and law professor. She attended Vassar College in Poughkeepsie and then Albany Law School. She became involved in the women’s movement during her undergraduate years of 1907 to 1911, and served as Saratoga County Chair of the New York State Woman Suffrage Party between 1916 and 1918.

Starbuck was one of the first women to be named to the Executive Committee of the Democratic State Committee in 1918. After 1920 she served on the Committee for the Uniform Laws for Women of the National League of Women Voters, and in 1921 she served at the newly opened Skidmore College as Executive Secretary and Professor. 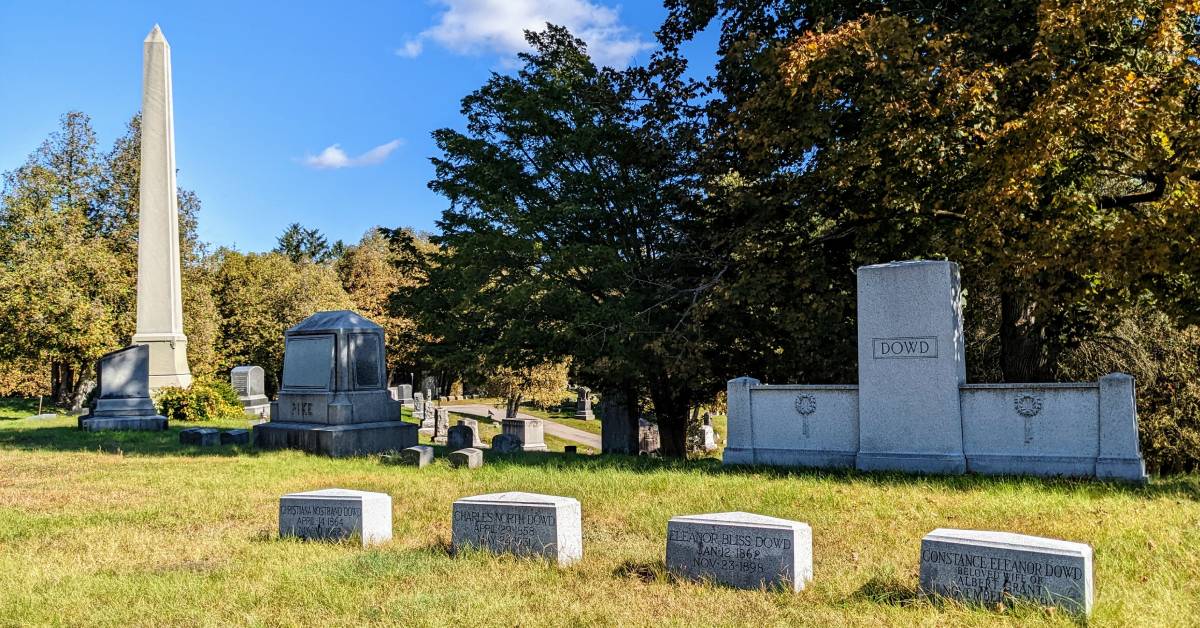 If you hate our system of time zones here in North America, you can blame Charles F. Dowd, who was the first person to propose multiple time zones. He did so to accommodate the emerging railroad system, which required reliable arrival and departure times.

Dowd met with railroad officials and issued his plan in 1870, which was met with some support and a lot of backlash. The time zones were eventually adopted for use by American and Canadian railroads in 1883.

Prior to the time zone proposal, in 1868 Dowd purchased the Saratoga Female Seminary at Temple Grove near Saratoga Springs, which he co-ran with his wife Harriet. They ran the school together for many years, and he came up with his time zone proposal during this period. The school closed in 1900.

In a spooky twist of fate, Dowd accidentally walked into a train at the intersection of Broadway and the Delaware and Hudson train crossing in Saratoga. He was thrown 30 feet and died immediately.

Seymour Ainsworth: A Man Who Knew How to Put a Feather in His Cap

Seymour Ainsworth was a skilled businessman and inventor in Saratoga Springs during the mid to late 1880s. He took note of how feathers in fashion were becoming big with the female socialites on the Saratoga scene. Ainsworth subsequently invented the feathered fan, first making the item out of turkey feathers, and then switching to ostrich. It was patented in 1868.

Renderings of he and his wife Catherine’s faces can be seen inside circular wreaths, side by side, on their graves. 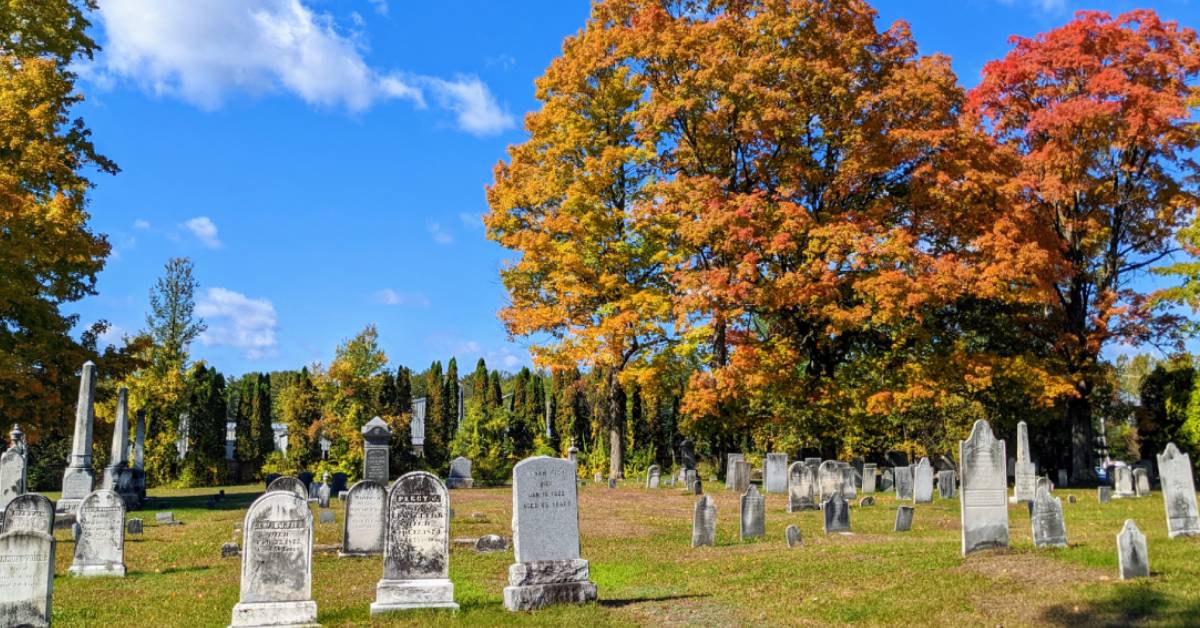 George “Crum” Speck: The Creator of the Potato Chip

If you’ve ever heard that the potato chip was invented in Saratoga this is your man: George “Crum” Speck. In 1853, Speck was a cook at Moon’s Lake House on Saratoga Lake. As the story goes, an unhappy customer sent back his French fries, insisting they were not crispy enough. Speck cut them as thin as he possibly could and fried them. Crum later ended up opening his own restaurant in Malta, that served chips.

This invention is sort of an unofficial one, as many food-related creations are, in part because he never patented or took credit for the potato chip. Also, his sister and fellow restaurant coworker Catherine Wicks claims to have invented the salty delight after accidentally dropping a thin sliver of a potato into a hot frying pan vat and then eating it.

Sergeant Thomas A. Baker: A Renowned Medal of Honor Recipient

Sergeant Thomas A. Baker served at the Battle of Saipan in the summer of 1944 at the age of 28. He proved his bravery and dedication to his company (a company being two or more platoons) over and over again.

Baker voluntarily took a bazooka and dashed alone to within 100 yards of the enemy holding up his company. Days later, he volunteered again to take a position in the back of his company advancing across an open field to protect against surprise attacks. They came upon two pockets of enemies consisting of two officers and 10 other men; Baker killed them all.

When Baker’s company was attacked from three sides by 3,000 to 5,000 Japanese soldiers, Baker was seriously wounded but stayed on the line. When his ammunition ran out, he was carried about 50 yards by another wounded soldier. Baker was propped up against a tree at his request with a loaded gun, knowing he was going to die, and not wanting to risk the lives of more US soldiers.

There were eight rounds in the weapon when he was left. When Baker was found, the gun was empty and there were eight Japanese men dead in front of him. Baker posthumously received the US military’s highest award, the Medal of Honor.

At the age of just 24, Colonel Elmer E. Ellsworth was the first Union soldier to perish in the Civil War, and the first conspicuous casualty of the war, but perhaps not in the way that you’d think.

The Malta-born Ellsworth took a job in Abraham Lincoln’s Springfield, Illinois law office in 1860 and the two became friends. When the president-elect moved to Washington in 1861, Ellsworth joined him. In May of that year after Virginia voters validated the state’s decision to secede from the Union, Ellsworth and his troops entered Alexandria to assist in taking control of the city.

Ellsworth apprehended a large Confederate flag from the roof of an inn. As he descended the stairs to leave, innkeeper and slavery enthusiast James Jackson shot and killed him. Ellsworth is memorialized by a monument erected in 1873. 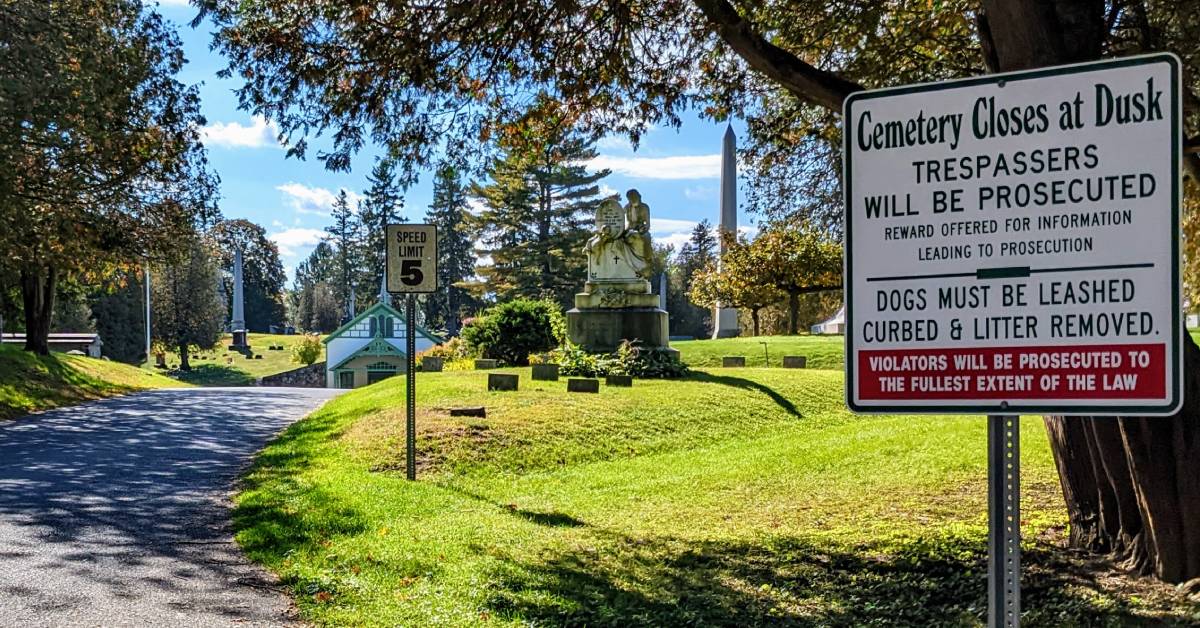 Please take care to note individual cemetery rules before you visit. Cemeteries are not typically open past dusk, so no recreating séance scenes from Now and Then. Daytime walks and visits, only! Also, practice general cemetery etiquette, like walking around the graves without touching monuments or headstones, not leaving trash behind, and respecting other people who may be visiting loved ones.

The best way to find a grave in a particular cemetery is to check out FindAGrave.com beforehand, which is likely to have the exact plot the gravestone is on. Some are easier to find than others.

The above list of notable graves is by no means exhaustive, but a pocket of the fascinating individuals who have been associated with the Saratoga region for one reason or another. We encourage you to discover more interesting graves on your journey, and to learn about the people behind them.

Finally, if you’re interested in group cemetery tours, the Saratoga Springs Preservation Foundation does a group tour every year at Greenridge Cemetery, and the next one is on October 19, 2022.

<< Back to the Halloween Guide

<< Back to the Fall Guide