Visit Saratoga.com For Everything Saratoga
Enter Giveaways Advertise
Note: Saratoga.com is not responsible for posts and comments written by non-staff members.
Home  »  Mare's Musings  »  f!lly Racing Radio: And Now, for Something Completely Different…

On Saturday, July 20th at 8AM, WJKE The Jockey hosted the debut of a new horse racing radio show. (WJKE = 101.3FM in the Saratoga / Capital Region of New York State) The show’s sole sponsor–dedicated to the mission of the show–is NYRA–the New York Racing Association.

NYRA and WJKE got together with a certain woman-type racing essayist, and thought that a racing show by a women, for women in horse racing, was a good idea. Marketing the sport to the majority of the fan base–imagine that…

(NOT that men aren’t welcome to join the listening audience–not at all. But let’s face it, most sports broadcasting, including horse racing, is hosted by men and aims at the male demographic.)
Ironically, this male-type demographic is not the majority of those who enter the gates of a race track, or who watch racing on television. (Ask Nielsen, the television ratings company.)
(Menfolk, your support is welcome, and received gratefully, for this new show. Females are the majority of the fan base in horse racing, but you who comprise the other 49% are absolutely appreciated.)
The name of the show is f!lly Racing Radio. (Catchy title, eh?) The first show went well, we think and hope that race fans who enjoy news mixed in with sassy repartee will listen in and enjoy what you hear. We women may do horse racing radio in differently than men–but that’s OK to be different. Heck, it may even be that the difference between our two gender-dictated styles can make for lively dialogue between the two genders.
When first I began writing about horse racing, two very nice turf writers–both gentlemen, whom I like very much–told me that I’d never make it as a racing writer because I write like a girl.
The genders don’t have to do everything the same way in order to do it well, or to open up exciting conversation. My personal career goals are simply to present writing and radio that is enjoyed by at least 51% of the racing population–it’s groovy if the other 49% can dig my work, too. Everyone is invited to f!lly Racing Radio, most notably, the wonderful men in our lives and in our sport.
🙂
f!lly Racing Radio aims to entertain–amuse, even.
* We talk about racing, including stakes races at Saratoga every week of the seven weeks of the meet.
* Racing news will be passed on and perhaps become the fodder for a bit of opining.
* Fascinating women who participate in the sport will be interviewed each week, and
* Udates on events and activities at Saratoga Race Course as she celebrates her 150th birthday will be announced. (She looks great for such an old babe, yes?)

f!lly Racing Radio hopes also to help new fans feel comfortable with the sport, and those who are lifers to think, and start conversations. Ideas will be tossed around during the Op/Ed portion of the show. (Listeners are encouraged to suggest topics for Op/Ed–you all have great ideas, and I want to hear about them.)
Whoops. Did I write, “I”? Oh, all right, you’ve caught me. Your humble scribe is the female who’s womaning the mic. I confess, I host f!lly Racing Radio. 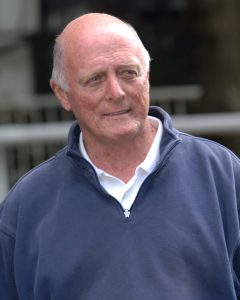 (A side note: my first interviewee was none other than the legendary, Hall of Fame Trainer, LeRoy Jolley. Yep, he’s a man. Yep, he’s cooler-than-cool. So cool, he’s ice-cold. And he’s the sole male interviewee on the show because he’s the first man I met in racing–seven years ago–who made me realize that there are some wonderful men in racing who are supportive of women in the sport. He’s passionate about growing the sport, and he believes that females are the key. I’m not going to quote him–hopefully you heard him and caught his amazing wisdom.)
I try to inject wit, good banter and my genuine love for horses and the sport of racing them. We may blast in like a f!lly in the wild, but I promise, no reason to be scared. NYRA, WJKE and I want you to become fans of f!lly Racing Radio, and to look forward to each of the broadcasts. (Every Saturday of the Saratoga meet.)
You readers know that I use that word, “passion,” a lot. This is something that we share, you and I, if you’re already a fan of racing. You’re obsessive about horse racing, and so am I.
And if you’re a new fan–or you’ve just discovered the majesty of The Horse–we want to help you grow, and to realize that there’s a place for you in our beautiful sport!
Whether you’ve just met a horse or have been a fan for 50 years–whether you see yourself always, only standing at the rail as a fan or morphing that love into a career of your very own–we hope to help you explore the possibilities.
I’m not going to wax on much longer. If you’re a regular reader of Mairzy Doats here on Saratoga.com, you know how I write. I hope you tuned in this past Saturday, July 20th, and heard the show. I’m working to translate my writer’s voice into an interesting radio voice. I hope you tune in next Saturday, July 27th–don’t let me hang out there on the airwaves all by myself, friends. Come on along for the ride. 🙂
[BTW: WJKE The Jockey, 101.3FM is on your dial if you’re in the Saratoga / Capital Region, but never fear. If you’re in Dubai, Florida, Serbia or Mars, you can hear the show online after each broadcast, on WJKE’s website. (Below.)]
I am eternally grateful to NYRA for taking this leap with me–with WJKE–and presenting this new twist in racing radio. It’s wonderfully appropriate that, in this historic year–150 years of racing in Saratoga–that we’d celebrate by working together to bring women fully into the fold. To help grow the sport by introducing women to a racing radio personality who shares not only biology, but passion for The Horse.
And perhaps you can do me a favor? If you’re excited about the potential of f!lly Racing Radio, and of growing the sport by encouraging women and girls to find their bliss as fans and in racing careers–please share the URL to this article. Please listen in, on Saturdays or online. (And if you see a NYRA official when you’re in Saratoga, let her/him know that you appreciate that NYRA is going boldly where very few women have gone before.)
It’s all about community, peeps. We’ve put this show together with a goal of expanding our own racing family: we hope that you’ll tune in, share–and share our excitement. (That is, IF you’re excited about the possibilities.] (Yes, please do “like” on Facebook. But liking isn’t listening, or sharing the mission. I’m asking you to “like” AND to share the URL, and to listen to the show. NYRA, WJKE and I would do the same for you.) Please understand that we’re not doing this show for me, we’re working together in the hopes of growing our sport. 🙂
🙂
Horses and women are a natural combo: horse racing radio by a woman, for women (and very cool men) is a natural next step toward bringing our sport, to the widest-possible audience, and making it stronger than ever.
NYRA knows this. WJKE knows this. You know this. Let’s rock the airwaves, and then, the sport of horse racing, itself.
Notes:
* www.nyra.com

* Special Thanks to Musician/Composer/Poet/Recording Artist, Andy Pratt, for the use of his song, “Avenging Annie”–I’ve loved this song for 40 years, since it was first released in 1973. Andy graciously granted us permission to use “Avenging Annie” as my lead-in and lead-out music. Thank you, Andy!
* To suggest a shout-out to someone (horse or human!), or to suggest topics, interviewees, etc., please email me at
Filly.RacingRadio@yahoo.com
* Photo credit:
LeRoy Jolley courtesy of NYRA/ Adam Coglianese