Visit Saratoga.com For Everything Saratoga
Enter Giveaways Advertise
Note: Saratoga.com is not responsible for posts and comments written by non-staff members.
Home  »  Uncategorized  »  Livin’ a Dream!

“Just start with ‘Well, I didn’t throw up, but I cried like a baby‘ for your next blog,” laughed Paul Morgana.

Actually, everyone laughed when Paul said that at dinner Friday night. Myself included.

So, what the hay. I’ve tried writing this thing a dozen times and can’t come up with the lead. So, here it is.

Well, I didn’t throw up, but I cried like a baby.

He is right though. I didn’t throw up. I was sick to my stomach, I was as nervous as I’ve ever been and it was all I could do to keep it together.

It wasn’t because of the walk into the paddock I looked forward to. It wasn’t just because I am with Stacy. It was because, on paper, he had a shot at this thing. This was a good spot for him. If he breaks clean and runs like he usually does we’re going to get more than some of the spoils. Baby, we’re gonna get all the spoils.

So, naturally, I was sick to my stomach. BUT, I didn’t get sick.

No worries though. I wouldn’t let you down. I promise. Because even though I didn’t get sick I can report that moments after the race I did cave. I buckled and I crumbled. Not unlike a baby having’ it’s pacifier stripped from its hands (or worse, a glass of wine out of mine) I bawled I bawled I bawled.

Guess you can take that point back I just scored. Sigh.

“Come on honey, it’s time for the win picture,” Stacy tells me as I lean on the rail looking out at the track.

I turn and she sees me. My sweet kind woman, always there with a gentle hand and an encouraging line of support sharply reminds me “Alright. Come on. Get it together. We got a win photo to take and you don’t want to be crying in it.”

Boom. Like that I dried up, stood up straight (maybe a little shaky), got to my place in the winner’s circle and for the first time ever had my picture taken there.

And I owe it all to the Scelfo family, and Runaway Jim. 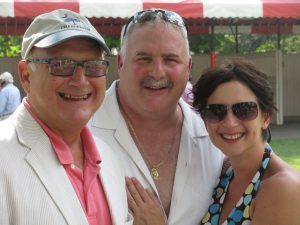 A field of 10 assembled for the mile and sixteenth test on the inner turf at Saratoga Friday afternoon for the eighth race.

After breaking alertly with a little brush at the start, Runaway Jim stalked tepid fractions of 24 4/5, :48 4/5, allowing rivals Duel Citizen and Wishingonadream to carve out the early fractions in a speed duel. When they turned for home Runaway Jim was fanned four wide after a perfect ground saving trip from jockey Rajiv Maragh.

He changes leads. He puts it in another gear.

Maragh lowers himself for the drive, rides chest to saddle, fully extended.

Jim’s ears pricked, legs striding, eyes on his business. Whip tucked. One crack on the right shoulder to keep him from drifting out.

With a furlong or more to the finish Jim took command under strong urging.

The favorite, Seattle Mission, was in an all out drive to catch Jim but it wasn’t happening. Not this day. This was Runaway Jim’s day.

Ridden hands and heels to the wire in 1:42 2/5, his jock came back telling us he wanted to keep going. He could run all day.

All day, baby. That’s our Jim. Runnin’ all day! 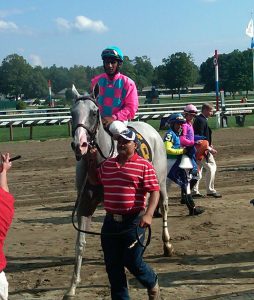 This race for Jim was different than the others. Not just because he won at the hardest racetrack there is to win a race, but because he had a couple people in attendance he normally doesn’t.

First and foremost, the man responsible for putting Seabrook Stable together and running all the less glamorous side of things, Rich Scelfo. He’s also my Stacy’s Dad.

As he does all of that, and we enjoy the fruits. But on this day, it was a little extra special because this was the first time Mr. Scelfo got to see his boy Runaway Jim run – live and in person.

Mind you, he’s never missed a race … on TVG. But now here he is, at The Spa, to see the gelded son of his homebred mare Miniconjon. This makes it even more special.

Also in attendance are Mr. and Mrs. James Chatfield. They are co-breeders with Mr. Scelfo and if it weren’t’ for them getting Miniconjon a midnight rendezvous with Freud, we all wouldn’t have been standing somewhere other than the paddock Friday afternoon.

Paul Morgana, a close friend of the Scelfo family for many years, and a co-owner of Jim was there. He also was the life of our dinner party a couple of short hours after the race. Every 10 minutes like clockwork he raise his wine glass toasting Jim. It should be also noted everyone of us welcomed every toast.

Danny Szymanski his wife Alison were also in attendance. So was his buddy and colleague Mike Samples.

The bummer of it all was that there were a few who couldn’t make it. Sue DirRenna, a part-owner of Jim and Pauls bride. Randy Johnston, an owner who lives in the Midwest; Ken and Anna Scelfo – Stacy’s brother and sister in law who just welcomed a beautiful little baby girl into the world less than three weeks prior; and of course, Patricia Scelfo, – Rich’s wife; Stacy and Ken’s mom.

Ken, in fact, is the one who is single-handedly responsible for the naming of Runaway Jim. An avid phan of the group Phish (he’s been to 75 shows for heaven’s sake) he was given the reigns to name him a couple of years ago. Without hesitation the family took to the name like Ken does to a Phish tour and a legend among the family was born.

Of course, Runaway Jim couldn’t be more suited to his style, particularly as he looooooooooves to run away from his rivals.

“So, what was your favorite part of today?” I ask Stacy early on in the 200-mile drive home.

Every day we get to spend a day together it’s how we close our evenings, with that question.

“What was your favorite part of the day?”

I turn to my right and catch a glance as she thinks. There it is again. That smile. I never tire of it and I love (selfishly) being responsible for putting it there whenever I can.

“You know the rules. If you can only pick one …” I reply.

She thought on it for a while. You can’t hurry someone with a question like this after the day we had. And when the answer came to her there didn’t seem to be a shadow of doubt as to what it was.

“Standing between you and my Dad when Jim won,” she told me. “To be right there with my two favorite men, to share that amazing experience with both of you there. I was so glad you were there with me. I can’t believe that my Dad got to be here too. It was just amazing. Yeah. If I had to pick one thing, it would be that.” 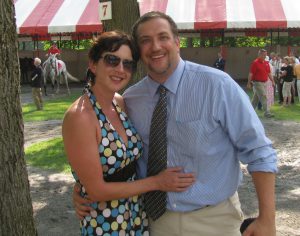 “Your turn, honey,” she says. “What was your favorite part of the day?”

Then I thought about standing in the winner’s circle. Leaning against the rail. Emotional as I have ever been. I figure that had to be a contender for “Moment of the Day.”

Then there is the realization of my one dream – to be involved with a horse that wins at Saratoga and get my picture taken in the winner’s circle here. That is one thing in horse racing I always wanted and never thought attainable for me.

All these thoughts rattled through my head. All of them carrying equal weight.

But the truth of the matter is, as much weight as each of those memories carry – the moment I knew he’d win, the win picture, the dream of a lifetime realized – each and every one of them paled in comparison with knowing I had it all … with Stacy.

Where can there ever be joy in life if it isn’t shared with your best friend, your heart, the most important person in your life?

Her endless stream of kindness. The music that is the sound of her laugh. The happiness that resides in those eyes. Her arms wrapped around me the moment after Jim crossed the wire (hell, someone had to hold me up it may as well be her).

Runaway Jim had won. Stacy is in my arms.

THAT was my favorite part of the day.

THAT was my life’s favorite racing moment.

To Stacy, her father and her whole family there is a debt of gratitude I will never be able to repay.

You provided me with the greatest moment I have ever experienced in Thoroughbred horse racing.

And even though I have no idea how to repay such a gift, I can assure you that you will always have the lifelong gratitude of a blubbering idiot. One who feels no shame in weeping like a child in the Winner’s Circle of Saratoga Race Course.

Because, I can assure you, I am aware of its worth.

I am aware of its magnitude.

I am aware that none of this happens without you … or Runaway Jim.