SARATOGA SPRINGS – This just in – Toto is gone!
{{Cue music}}
“…That would be Toto – with Africa. If you have Toto on your game board, Toto can go!” The voice, pleasant and somewhat familiar, of Jackie, Host of Big Crunch Bingo at Harvey’s (14 Phila Street – see: their website./) on Tuesday nights at 7 p.m. – resonates as the tune snippet fades… NEXT! 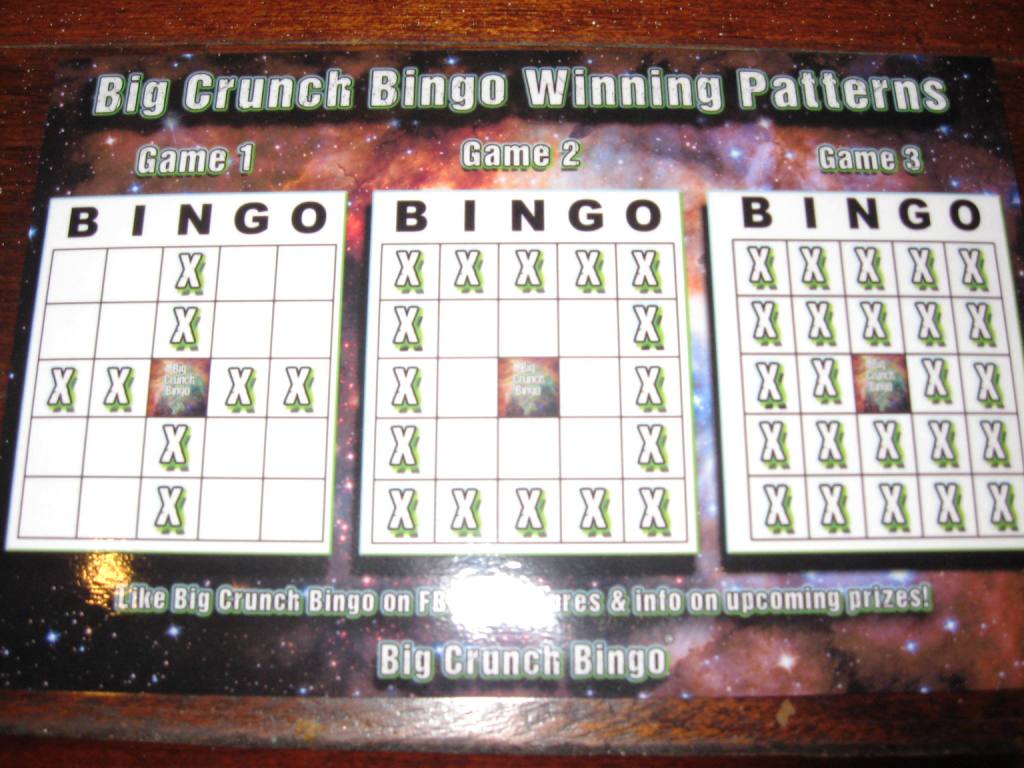 OK – so what exactly are we talking about here? Some places have trivia nights – often fierce competition, constant attention needed. Others have karaoke nights – semi-fierce at times, talent strongly preferred. But what if you just want to go to a place and chill? A little bit of social interaction, fine – but it’s Tuesday night – please, don’t make me think!

Big Crunch Bingo appears poised to fill that gap – for they provide you with all you need to have a great time with no great effort needed nor expended. That is, effort beyond what you might already do at Harvey’s on a Tuesday night… e.g.: “Hi, Lynn – another one please!”

With some entertainment options, calling it ‘mindless’ would be a slam – In this case, it happens to be just what the doctor ordered. 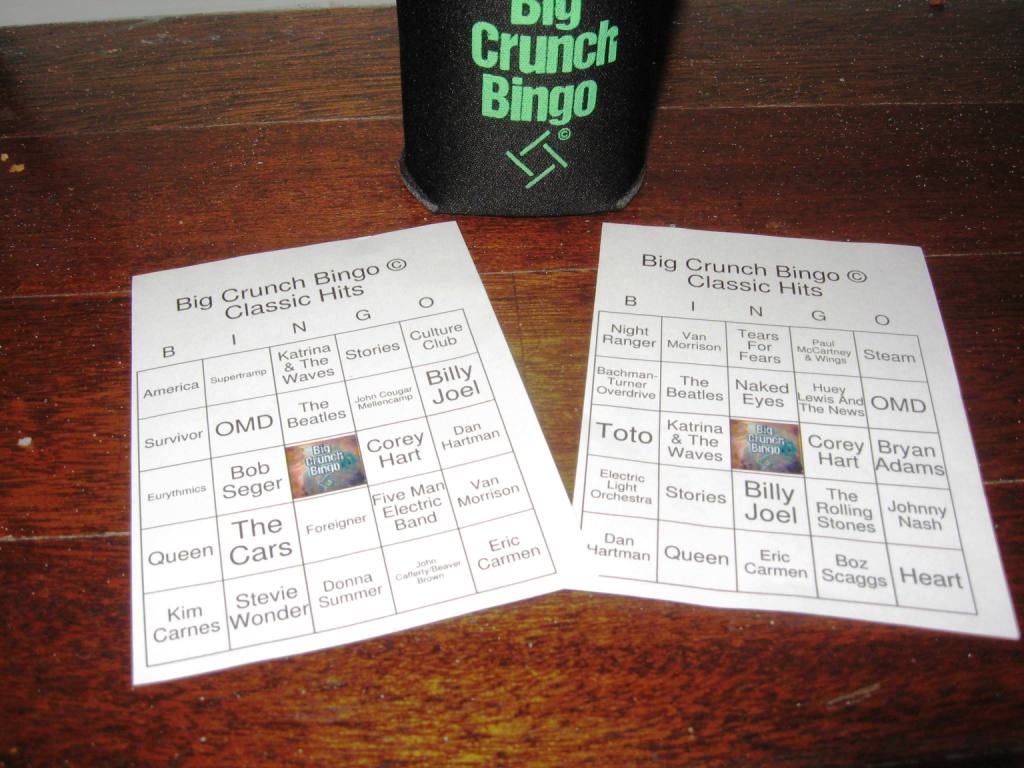 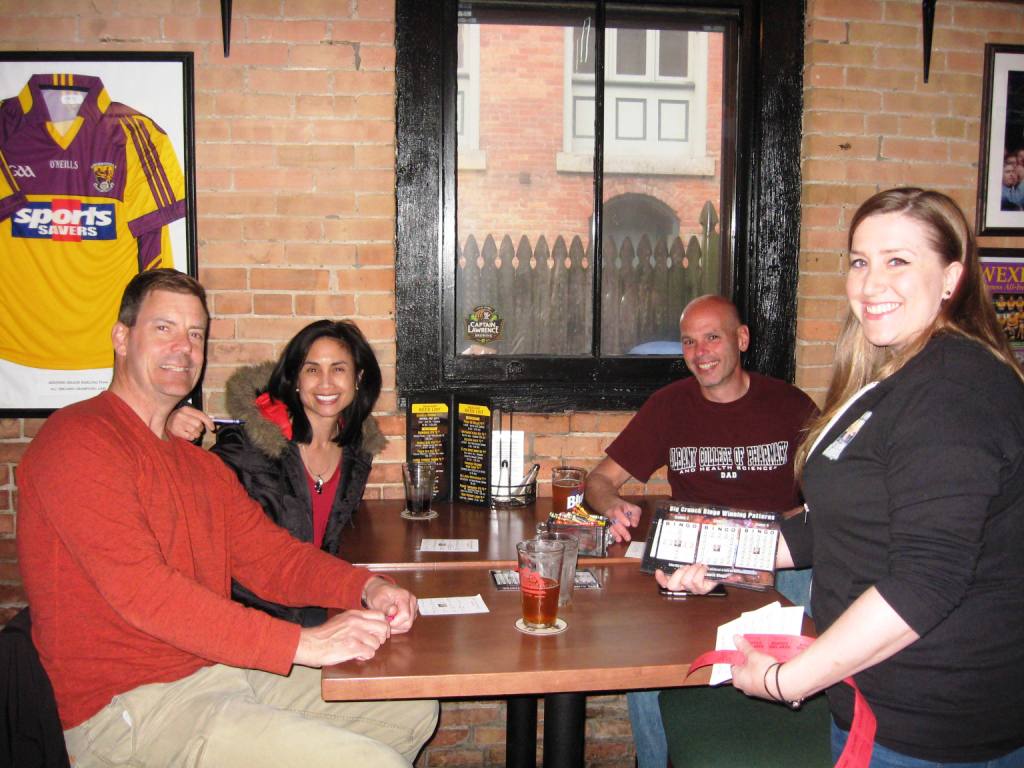 The game is played in three rounds: you can play any or all. Jackie dispenses bingo game boards before each round, with the names of popular music groups and an overall theme for each round, such as “Meteors” (AKA one-hit wonders), Classic Rock, or ’90s Music. Jackie’s iPad strategically shuffles snippets of popular tunes, and they are played one-by-one – similar to drawing, oh, like B-95 in a Bingo parlor. 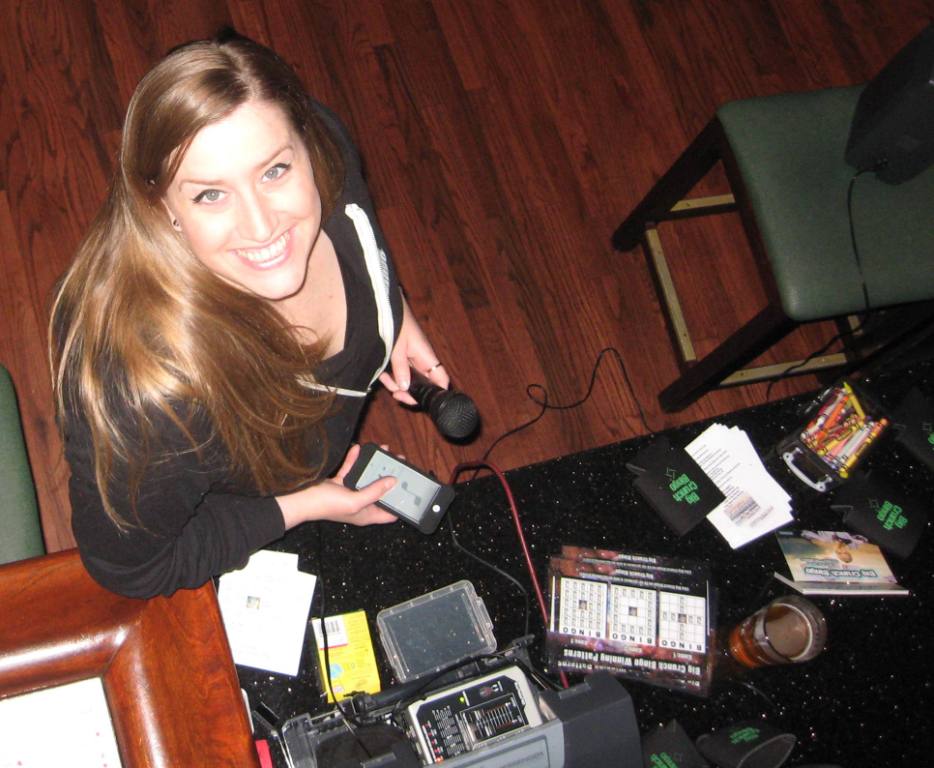 Hmmm… Wait a minute! That voice… could it be? Why yes, listen closely – and you will hear the same voice, resonating through Harvey’s, that lots of you hear on mid-days on pop radio giant B-95. Oh, THAT Jackie! So, she does have her rock-n-roll bona fides, as do her fellow game hosts, Blaise and Pete, who both came on their night off to play and support Jackie. The fact that there was a photo op involved was but a mere coincidence, I am sure…

But I digress – back to the game. You know the tune, but you don’t know the artist? No worries, my friend – remember, you’re not here to think! After each, snippet – Jackie and the hosts tell you who can go… or sometimes, “The Who can go.” 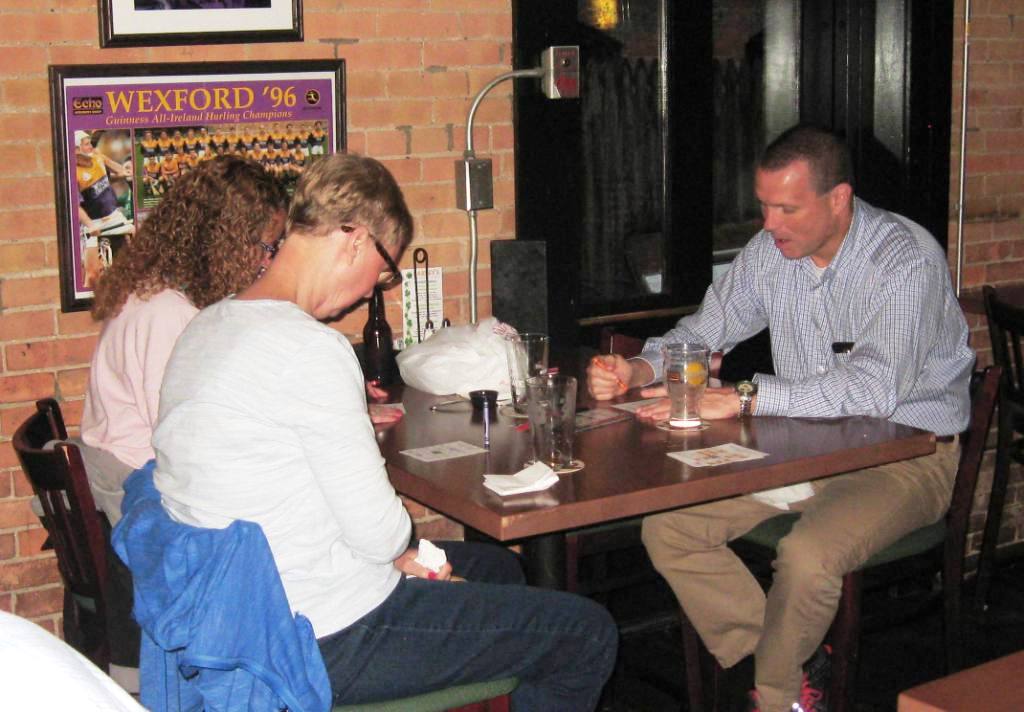 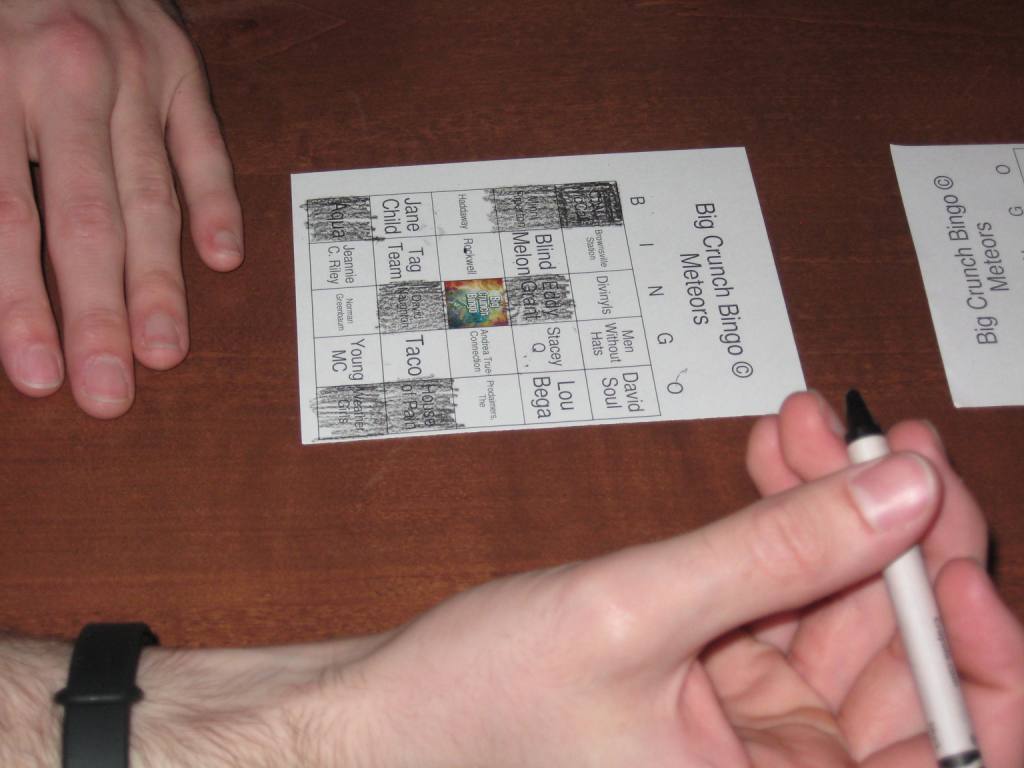 So, you get the tunes, you get the answers – and you mark your board in the hopes of having a cross pattern in round 1; a box, or perimeter pattern in round 2; and completely filling your board in round 3 – when the biggest prizes of the evening are dispensed (Last week, this was admission to a VIP Kentucky Derby party.) Earlier rounds had prizes like free drink tickets, Big Crunch Bingo coozies, and the like.

And, that’s about it. I’d like to get into the complicated alchemy of why this works, but it is Tuesday, like I said. The point is – it does work. It’s just a good time!

While just the key snippets of each song are played, they are long enough to allow you to remember and sing along – or even vogue like a rockstar! 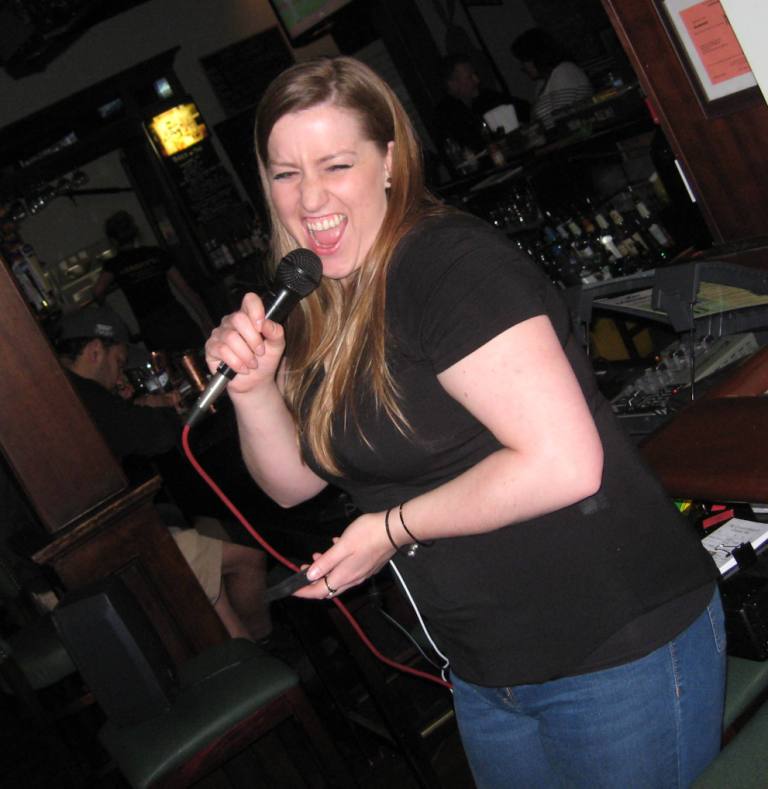 Now in it’s third year, Big Crunch Bingo is something people are looking forward to, to get them through the drudgery of the work week… the best part is that you can bring a newbie friend, and he/she can whip your butt! If you’re looking for something to do tonight, here’s a good idea.

Sometimes the simplest answer is the best answer. Rock on! 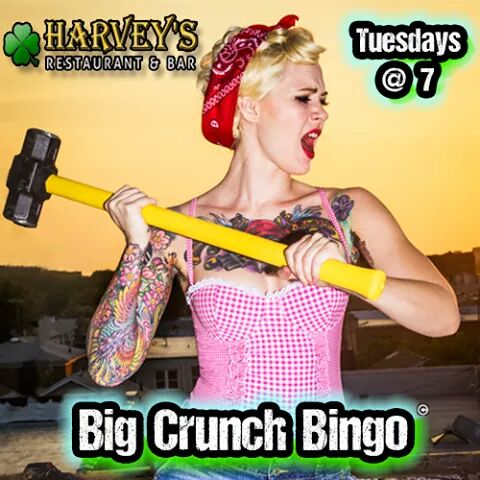