Visit Saratoga.com For Everything Saratoga
Enter Giveaways Advertise
Note: Saratoga.com is not responsible for posts and comments written by non-staff members.
Home  »  Book Reviews  »  Book Review: “For Parents Only: Straight Talk from Inside the American High School” by Richard Michael Holmes.

I’ll start this book review by being brutally honest: I don’t know anything about

education. I mean, I got an education (high school, college). I had some great Teachers, Professors and Mentors along the way. The combined Wisdom of these Educators changed my Life in many ways, all for the better. I learned how to think critically, and to apply those principles of logical thought not only to academic work and intellectual endeavour, but to Life, itself. (Arguing with someone who doesn’t argue critically, is a blast. The next time you have a fight with a significant other, throw out this sentence: “That’s an ad hominem argument–sorry, you lose!” This is endlessly entertaining for me. And wildly aggravating to the worthy adversary.)

I digress. I am going off the board today, and reviewing a book that has nothing whatsoever to do with horses or their role in my Life as Muse. But the path I took in Life, which brought me to this place of vocational fulfillment as a communicator in the lovely world of horses, had its solid foundation in the insights of one Richard Michael Holmes, my high school English and Drama Teacher at Watervliet High School in Watervliet, New York.

“Prof,” as we called him, has written a book filled with Wisdom that he shares graciously, no holding back. This is the missive I share with you today, which I hope you will all acquire so that you, too, may learn at the knee of a master…

“For Parents Only: Straight Talk from Inside the American High School” may not have been written for me, specifically–I never had children, unless cats, dogs and horses count–but in a very real sense it was written about me, and my peers who walked the halls; slammed locker doors and anxiously obsessed over who we were in The Big Picture. This book is for parents, to help their children transition into high school and successfully–even joyfully–go through that four-year journey together. I can proudly say that my fellow Cannoneers and I were the petri dish in which grew many of the concepts I see between the covers of this wonderful book. 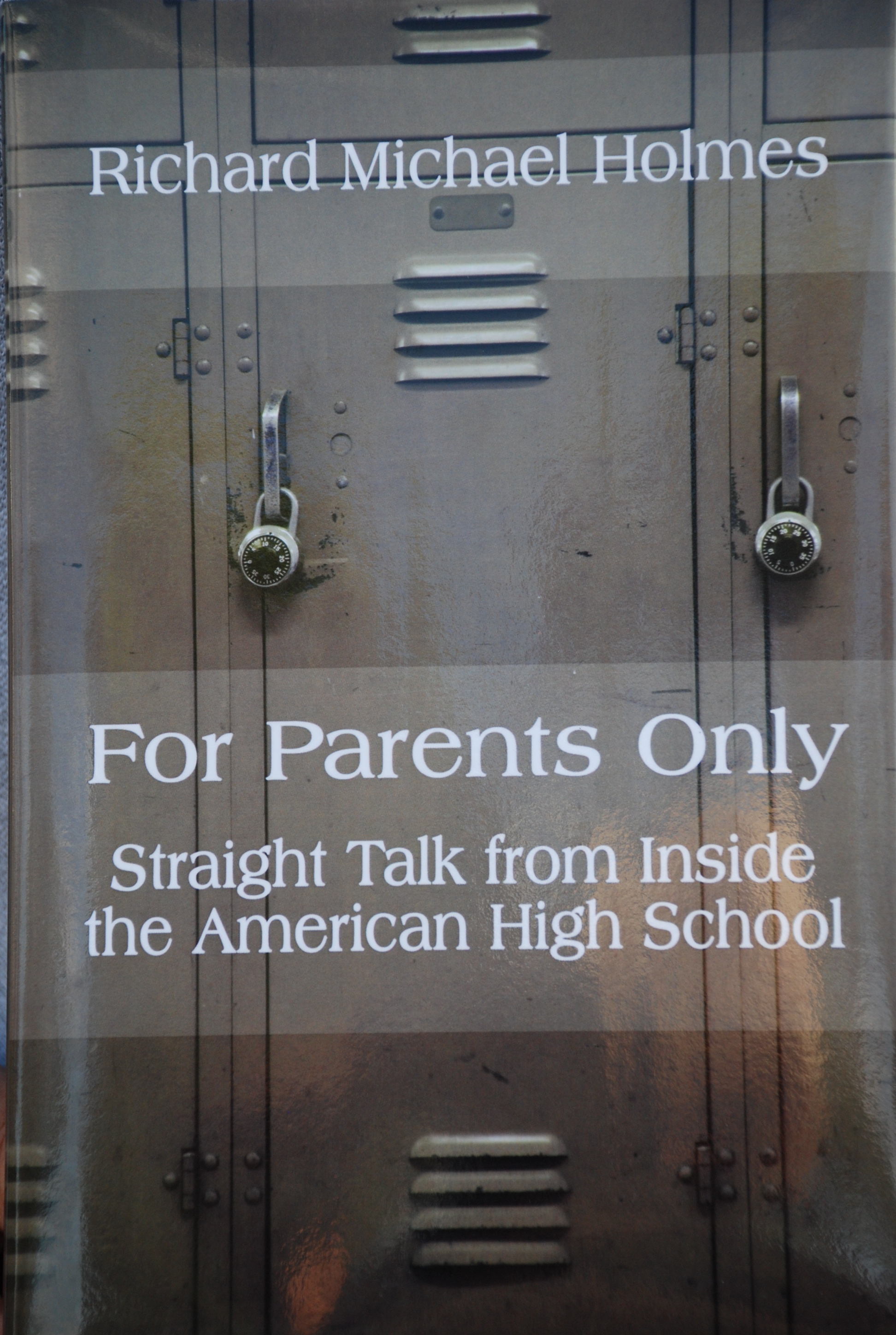 Good and bad, screwed-up and head-on-straight–we were the object of Prof’s devotion. Every one of us knew that he cared about us and the idea that we could grow into something mighty fine. This book, this lovely, brilliant little tome, is packed with insights that could only come from in the trenches. Anyone can get an advanced degree in Education, but unless you take your own education into the system and help minds to expand and potential to be realized–it’s all for naught.

I am grateful to realize that I can see my own Life within the pages of this book: I was blessed to have a family who supported me during high school, and encouraged every success while stealthily mining the depths on my behalf. Prof Holmes wants all parents to be like my family: involved, informed and one step ahead of their kids. As protectors, guardians and examples, it is the duty of parents to be the Mother and Father Bears who stand in front of their cubs and fight off predators. The berries on the bush may be sweet, but they can be poisonous, too: it is the job of bear parents to teach their cubs the difference, and to lead them to healthy grazing. 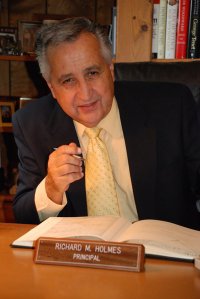 Prof taught me a huge deal about writing, thinking and having fun in the process. (Novel concept, that of enjoying one’s self while learning to love literature, and even to produce it from the contents of one’s soul.) Prof was handsome, wry, intelligent and intellectually challenging. He knew how to handle the dolts who sat like lumps of wet ash in class, whose feigned coolness was a not-so-clever cover-up for massive insecurity. Fake cool is easily detected by a savvy teacher, and Prof was savvy.

Well, we in the Class of 1974 all managed to graduate, some in spite of ourselves, and go on to the business of Life. Prof, too, graduated in a sense: moving up the ranks from Educator to Administrator, his career spanned four decades and change. He saw a lot during that time, he learned a ton, and he observed how the system works–or doesn’t.

I don’t know anything about education, that is, the methodologies and systems that turn small children who can’t-yet read into youth who have learned to love learning–but that’s where wise Educators like Prof come in. “The proof of the pudding is in the tasting,” as properly goes the adage–and Prof’s book, “For Parents Only: Straight Talk from Inside the American High School” is proof that Prof is a Pudding Master. (I absolutely adore alliteration, as Prof may recall.) His own education, as he morphed from Teacher to Administrator, then his judicious practice of his craft, provided tremendous insights into the system and how it can be used to the greatest advantage for students and their parents.

Chapters such as “Extra-Curricular Activities: All Work and No Play” and “Cliques and Conflicts: Sometimes There’s Trouble in Paradise” made me think about things that never occurred to me when I was a sullen, Allman Brothers-obsessed Junior in high school. (Yes, “Whipping Post” was my theme song in 1972.) But these are precisely the things about which every parent should be prepared to take on in the interest not only of helping their children transition into high school–but to thriving during those potentially-traumatic four years.

No teenager is going to be happy 100% of the time. From my own memory banks, they won’t be happy 50% of the time: raging hormones and the endocrine interruption of well-firing synapses are a fact of biology. Teens’ brains are not developed, fully, until much later, so we shouldn’t expect them to act rationally very often.

But as happy and safe as a high school student can be–this is a key foundational goal of “For Parents Only:.” The finished product–a student who goes through those four years with success without demolishing their ability to hear the beat of their own drum–well, that success is the result of a great deal of blood, sweat and tears. Parents, Educators and Administrators all need to work as a team to see each student as an individual with a raft of needs and desires–and goals which can be brought to fulfillment only by a carefully-blueprinted course of action.

If Parents and Educators join forces to assure that the children under their watch are provided with the best options in education, and that those options provide opportunities for growth, fulfillment, dodging negative experiences (and using the negatives which couldn’t be avoided as lessons)–a child can turn into a teen who turns into an adult who is strong, healthy, smart and ready to take on Life, whatever befalls.

“For Parents Only: Straight Talk from Inside the American High School” will entertain while it educates; bless while it blisters and instruct even as it teaches you parents a thing or two about yourselves.

A truly great book is one that, when we finish reading, we are compelled to pick up again and again because we know that there’s something to apply to virtually every situation we encounter on a particular path. If you have children who will head to high school in the next decade–or 100 years–you must get this book, and commit it to memory. The fact that you have Prof Richard Michael Holmes as your ally is a huge step toward winning not just the smaller battles along the way, but to victory in the war, itself.

Onward, through the fog.