Visit Saratoga.com For Everything Saratoga
Enter Giveaways Advertise
Note: Saratoga.com is not responsible for posts and comments written by non-staff members.
Home  »  Horse Sense  »  No Such Thing as a “Justa” — Justa f!lly, Justa Mare, Justa (Female) Trainer or Jockey…

Ahhhh, race fans…another big weekend at in horse racing is upon us. Not just A big weekend, THE Big Weekend. This weekend, for those of you who don’t travel to Saratoga for the races–or have yet to experience the majesty–or who may be in a full bodycast:

This is the weekend that will see SIX–count ’em, six–stakes races with purses over $100,000.
The million-dollar Travers Stakes–which dates back to 1864–will be run on Saturday, August 24th. The purse, $1,000,000, indeed is a tasty prize: only the country’s best three-year-old males are expected to race. Orb, Verrazano and Palace Malice will go up against each other, and those who dare face that wholly unholy trinity. 😉
I really, really, really need to point out here that the Travers is NOT restricted to males, only–it just happens that there are no females in the race this year. Can we ever just make a statement like that, regarding female race horses, and let it just sit as a single statement? Not go into a whole discussion about female horses vs. male horses? As the late, great Jess Jackson said, let’s just take our best horses. Put them on the track, and let them run against each other… 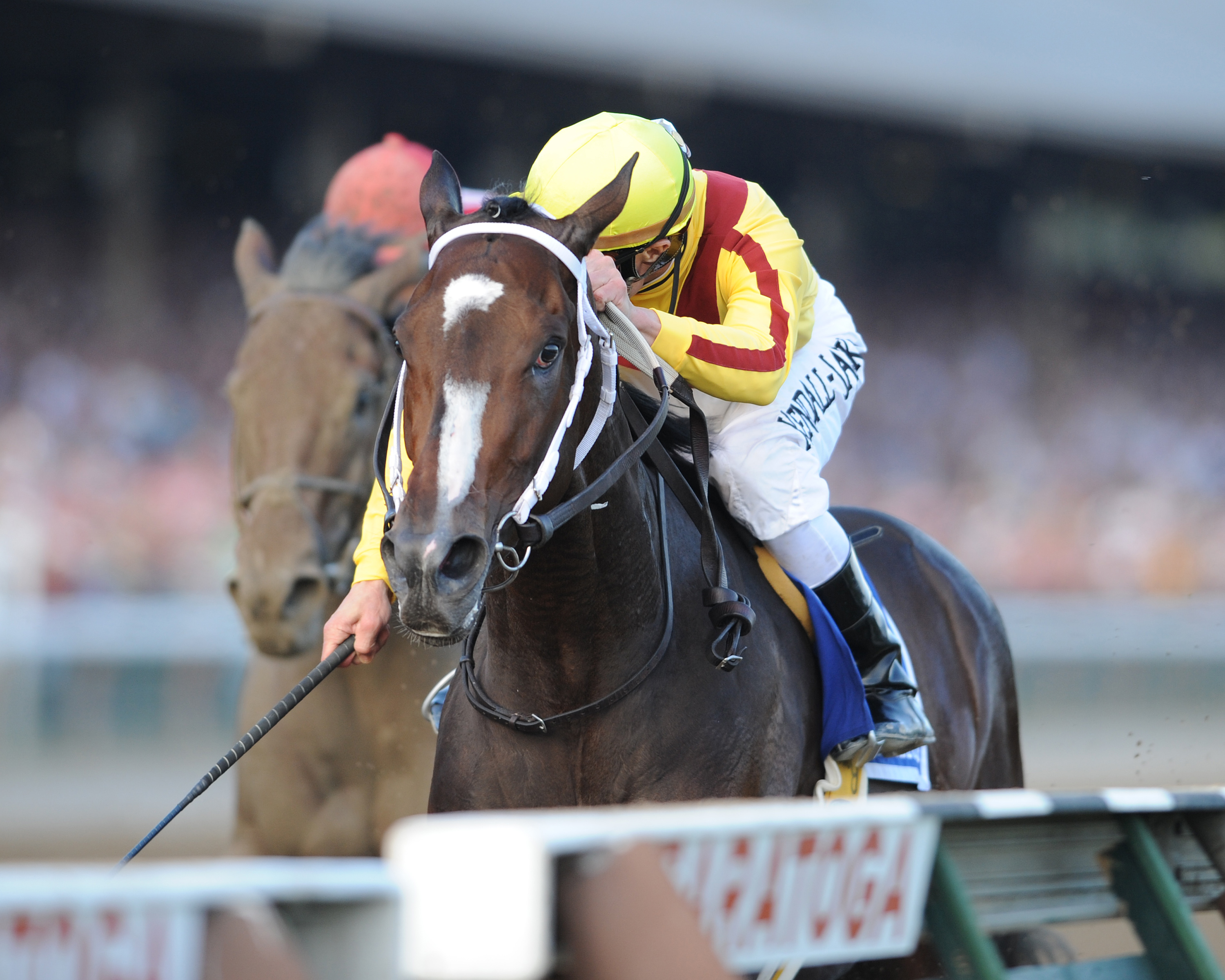 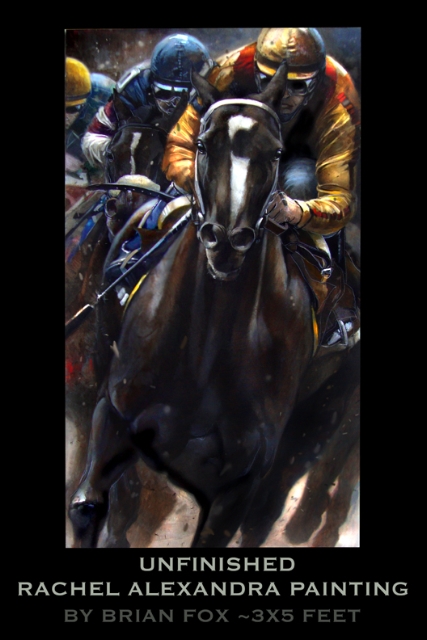 For Mr. Jackson, it wasn’t about Rachel Alexandra being a great FEMALE horse. It was about the fact that she was a great HORSE. Period.
The reasons why there are no f!llies in this year’s Travers are many and varied–but it is NOT because females in general can’t take on the males. Let’s get over that idiotic, misogynistic notion based on both myth and “tradition” right now.
(Note that cannibalism is a tradition in some cultures–and yet, not everyone involved benefits from the perpetuation of the tradition. Just sayin’, that not all traditions are good, or intelligent–or move a society forward.)
In the intro, I wrote that I wish people would just get over the whole female/male thing regarding horses. And then, of course, I move ahead and write this entire column about the subject.
The reason I’m doing so is that someone, somewhere along the line during this next week is going to write, say or otherwise shoot off his/their big mouth, claiming that the stakes races that are restricted to females (The Ballerina, The Ketel One Ballston Spa, The Test and The Personal Ensign)--somehow are “easier” than those for males.
Give me a break. Let’s look at two of the races:
The Ballerina on Friday, August 22. Seven furlongs, dirt.
The Foxwoods’ King’s Bishop, 7 furlongs, dirt.
Will not the f!llies and mares who run in Friday’s Ballerina be running on the same dirt as the open company who run seven furlongs–for the same purse money, $500,000–in The King’s Bishop on Saturday?
The sole difference is that some owners and trainers–depending on their horses’ experience to-date, health and other factors (all of which should put The Horse first and foremost)–will choose to put their three-year-old f!llies in The Ballerina, instead of in The King’s Bishop. 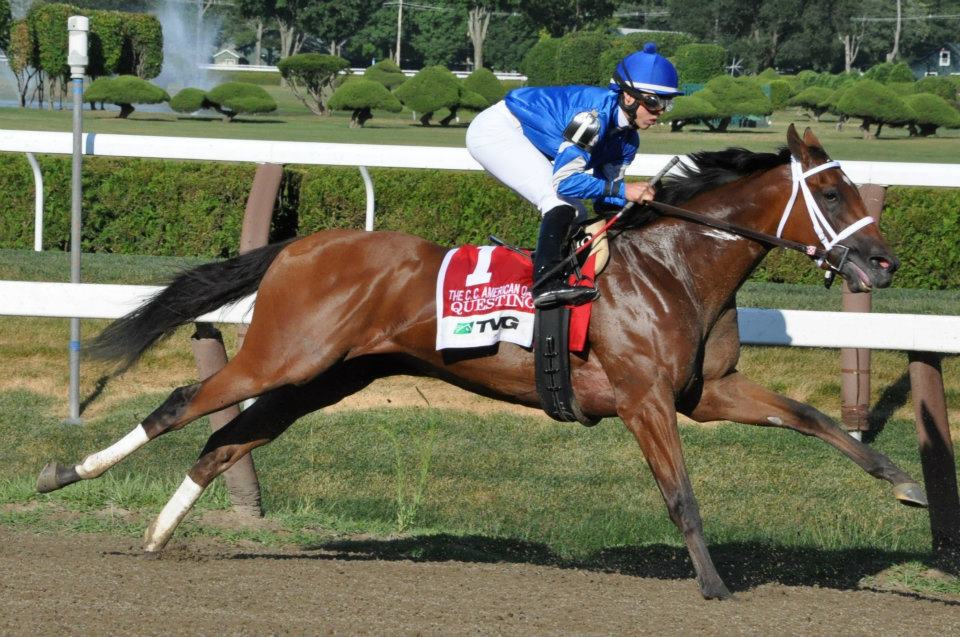 Does this mean that the horses who’ll run their guts out for half-a-million dollars in The Ballerina are any less capable, athletic or strong as those who’ll race for half-a-mil in The King’s Bishop?
The answer, of course, is a resounding, NO.
(Note: Were I the owner of a three-year-old f!lly, I’d be a lot more scared of a bunch of older mares than I’d be of running her against a herd of males. Just sayin’ Hell hath no fury like a chestnut Thoroughbred mare.)
But let’s think about this for a minute, logically, shall we?
In the aforementioned Ballerina and King’s Bishop–the playing field is level:
Same distance. Check.
Same purse. Check.
Same surface. Check.
So why do you suppose some people will write off The Ballerina as being “not as good” a race as The King’s Bishop? You may tut-tut me, but you know that there’ll be those who save their wagering money for “the good races,” and that may mean for them, The King’s Bishop and not The Ballerina.
IMHO, as the young people say these days–In My Humble Opinion, as a writerly type, and lover of language–I believe that it all comes down to language.
We all know that Language Determines Destiny: e.g., if you say, “I’m nobody,” then, by God–you are.
Never will you scale the heights.
Never will you see the fulfillment of your dreams.
Don’t even bother to create dreams.
If you believe that you’re nobody–then who are we–the rest of the world–to argue with you?
If you believe that you’re nobody–then you’ll never even try to succeed, because you’ve already decided in your mind and your heart that you’ll never go anywhere, anyway.
Well, the language that we use every day determines not only our own destinies, but also contributes to the shaping of society, and the destinies of others.
Don’t believe me? Try this on for size:
“She’s just a f!lly. Don’t expect too much of her.”
“She’s just a female trainer…”

“The cute, effervescent female jockey…”
In those three sentences, we have condemned three living beings because we’ve stated that they’re not much of anything. Not capable of being a great horse. Or a great trainer. And God knows, not a great jockey.
Ever wonder why there are only two women in the Racing Hall of Fame? It’s not because women aren’t as good as trainers or jockeys as their male peers–but because language keeps informing culture that women can’t climb to the highest levels of their chosen careers.
As long as we refer to big, strapping, strong, muscular, barbaric, warrior horses as “justa”--because they’re packin’ female parts–then everyone loses.
Trainers lose, because they have a horse who maybe COULD do something–IF only she were a colt.
Owners lose, because they lose the excitement of seeing their f!lly or mare become Horse of the Year.
Fans lose, because as long as the myth of female inferiority is perpetuated, there will be fewer female Thoroughbreds running in, say, Triple Crown races. (And as long as the Kentucky Derby people keep stacking the deck against f!llies–you won’t see a great f!lly run in the Derby, either.)
It’s not that there are no female horses who are capable of winning Triple Crown races–it’s that culture keeps telling them and their connections that they don’t need to, because they’re girls.
And let’s touch on the “female jockey,” “female trainer” thing. Why, for the Love of God, does the adjective, “female” go ahead of Abigail Adsit’s name? We can tell by her name that she’s a female.
Have you ever–ever–read in any racing or mainstream media the phrase,
“Todd Pletcher…the male trainer…”
or, worse yet,
“Todd Pletcher…the cute, tall, male trainer…”
No, of course you haven’t.
Let’s throw down, right now:
The height, weight, hair color, relative attractiveness or gender of a person is not important when discussing them in a professional capacity.
It doesn’t matter if Pletcher is cute, or Rice is beautiful. It has nothing, whatsoever, to do with their ability to…try this…train horses.
That’s their job.
How they look when they do their jobs is absolutely irrelevant.
And yet, you’ll read–this week, even–in some local, regional or racing publication that one of the jockeys or trainers is a female..and she’s cute…pretty…petite…gorgeous…adorable…sweet…precious…fashionable.
As if any of this has anything to do with her ability to ride like a warrior, or train with intelligence, insight and great love.
Do yourself a favor. This week, think about horse racing with your head, not with any cultural biases onto which you may hold. You may not even be aware of them! If you catch yourself referring to Nikita McLean, Jena Antonucci, Megan Fadlovich, Abigail Adsit, or any of another slew of brilliant, thinking, professional horsewomen as “justa” or as “the adorable Jena…”–Stop yourself.
These are not cute little dolls, or My Little Pony characters.
These are future Hall of Famers.
Stop mid-sentence. Realize that, by describing the physical attributes or relative cuteness of the woman, you are diminishing the years of hard work and sweat equity that she’s put into her career.
Ask yourself how you, as a professional whatever-you-are — would like to be referred to that way, when you’re doing YOUR job, and want to be taken seriously?
Now, think about the f!llies and mares who’ll race this weekend:
Great horses.
Strong, beautiful horses.
Like the sound of a thousand warriors, pounding toward home.
Those who happen to be of the female persuasion deserve your respect just as much as do the great males who’ll grace the track.
And not in their own category, either.
Don’t think of female horses in terms of being a great female horse.
A great horse is a great horse.
Three times in the last four years, Horse of the Year went to females. (Rachel Alexandra: 2009. Zenyatta: 2010. Havre de Grace: 2011.)
Those who get to vote on the Eclipse Awards had to admit—some, begrudgingly, I’m sure–that those horses were the best, hands-down, who raced as three-year-olds that year.
The females who will race this weekend are racing toward those Eclipse Awards, too.
They will run with all their hearts and souls–just as their male counterparts.
I’m certain that when God looks at a horse, He sees only that heart and soul. That gender’s got nothing to do with the power and potential that He built into each and every one of His horses.
If only we mere mortals can learn to see horses and the people who work with them the way God sees. Bet on f!llies and mares, the same way you’ll bet on males. Don’t make exceptions because a horse is female–hold both females and males to high standards.
Bet for the jockey or the trainer, not for the female jockey or female trainer.
Language does determine destiny: let’s determine to move this society toward egalitarianism for both horses and humans who happen to be females.
We’ll all benefit from the transaction of this new, open-minded tradition.
Let’s give it a try, shall we?
——————————————————
Photo Credits:
Rachel Alexandra, winning the Woodward, courtesy of NYRA and Susie Raisher.
Rachel Alexandra painting, courtesy of Brian T. Fox.
Questing at Saratoga, courtesy of Ronnie. Betor.