The sport of horse racing never will grow--doesn’t have a snowball’s chance in Hell of finding its way back to the glory days of the 1930s–as long as racing organizations and media continue to attempt to win new fans by putting the emphasis on wagering.

The phrase, “horse racing,” begins with the word, “horse.” This is the only logical place from which to grow a healthy fanbase of lifelong fanatics.
NYRA–the New York Racing Association–is starting a brilliant new program this summer in Saratoga, and it’s a concept that will grab young hearts; inspire imagination and grow the sport, from the ground, up…

In college, I took a course in Modern Theology, a study of theology in 19th Century America.

One of the things that we discussed in that class was the concept that humans had/have become distanced from Nature–that is, that human beings have grown to consider themselves/ourselves to be apart from Nature, as opposed to being A Part of Nature.
I admit, I’d never thought about it until the day that our professor, my advisor, the Rev. Dr. John Turner Grayson, introduced the idea. My eyes were opened, and I hope that some of John’s Wisdom–and that of some 19th Century thinkers–will guide me as I try to turn this into a logical conversation about the only right way to grow the fan base of horse racing.
We can thank “Humanity”‘s uppity ‘tude for gross lack of concern for animals on the part of many humans, on so many levels. That conversation could fill a library, so we shan’t go there today.
But the one aspect that I do want to discuss is something that I’ve written a hundred times before–and you’re probably sick of reading my rants about it, but here goes:
Horse racing never will grow beyond its current place of stagnation as long as racing organizations and media continue to put the cart before the horse. 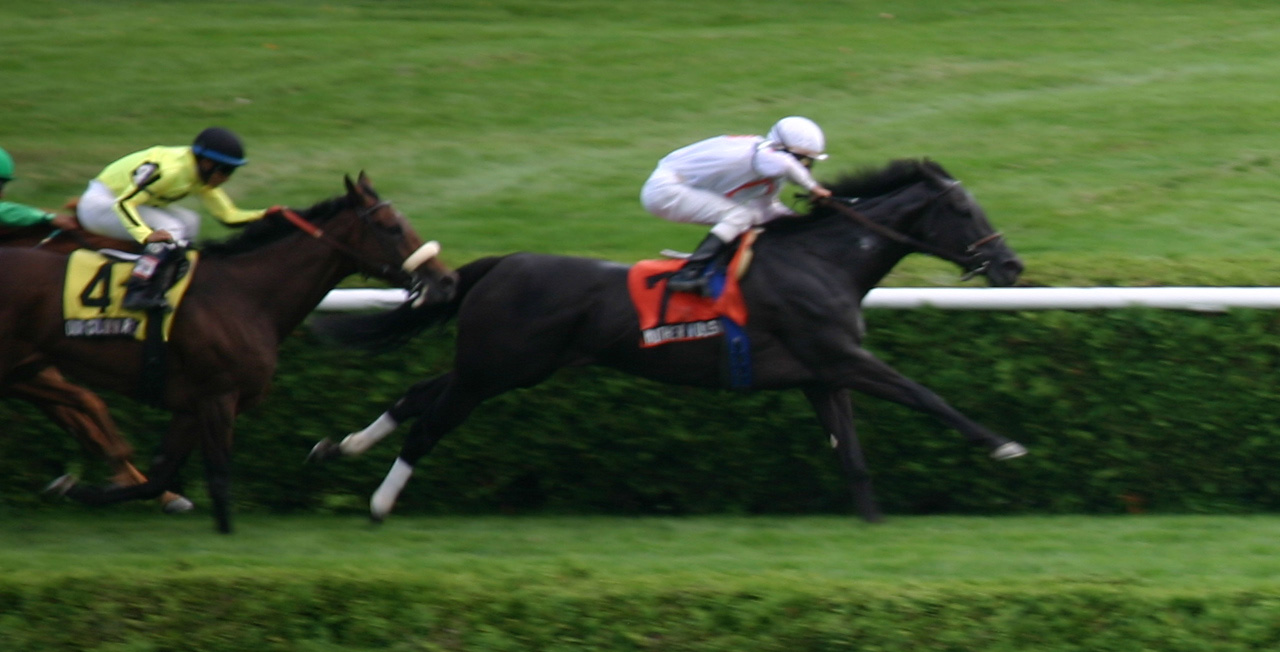 Really: The concept that obsessing about wagering–teaching the public how to wager–is the second thing that potential fans need to learn.
The first, of course, is WHY to bet. And that WHY is, The Horse.
If people want to learn only how to bet on horse racing–they may as well take their cash across the street, and pour their money into a slot machine or VLT. Gambling is gambling.
But horses–oh, horses–inspire the heart, mind and soul. Horses, as we all know, are the foundation of this sport–and a more regal athlete exists no where else in the world.
It’s easy enough for humans to separate themselves from Nature, even at a race track. Those who wish can just hole up in a carrel with a voucher machine. No fresh air–no blue skies–no interaction with other humans. No horses.
But that’s gambling. Horse racing is not gambling. Horse racing, itself, is a pure sport: two or more horses line up and run with wings of angels in a competition over a specified distance. That, alone, is horse racing.
Gambling is a by-product of the sport, itself. Yes, I know that without pari-mutuel wagering, there’d be no moolah to make the races happen. I’m not an idiot: I don’t think that the horsies just drop out of Heaven, and run without the need for trainers, jockeys, food, water, hay, stabling–I know that money makes it happen. And that pari-mutuel wagering is the system that brings in the cash.
But never should that idea, of taking Nature out of the equation, be the key motivation for involvement in the sport.

On Monday, June 23, I attended NYRA’s press conference in Saratoga. Of course the idea for the meeting was to introduce the media to all the wonderful events, horses, people and races that will grace our lovely Saratoga Race Course in 2014. (As I write this, the meet is a mere 22 days hence.)
Many things struck me, and compelled me to write copious notes on the many press releases contained in the media kit. But the thing that nearly had me jumping out of my seat and yell, “Yee-ha!” was this little blurb, the importance of which cannot be overestimated:
Child-friendly entertainment: In addition to the many regular family fun activities, the highly popular playground area will be expanded so that kids have more room to play on the various pieces of equipment. Separately, the backyard will have a new, dedicated area where children can visit with and touch one of Saratoga’s outrider horses and learn about a horse’s daily routines and activities.
WHAT? Children can touch a horse? Their parents can touch a horse?
Whyever would NYRA want you and your kids to do that??!?
Because NYRA is interested in growing the sport in THE MOST logical way: by introducing children –and you, their parents– to real, live horses. (Or, horsies.) 🙂

NYRA recognizes that children are the next generation of horse race fans. And that the way to win over their little hearts is NOT to hold seminars titled, Wagering for Pre-Teens.
No, NYRA listens. Children who accompany their families to the track can be either a pain in the neck–or they can be groomed to become the next generation of life-long race fans. Children like me: I started attending the races when I was four years old, and have been at that rail for 54 years now.
And I wasn’t a pain in the neck at the track, because I wanted to be there. You see, I was first plopped onto a pony when I was six months old. Rode a pony, with a cousin holding the lead, at age three.
But then at age four, I started riding Quarter Horses on my own, on that same cousin’s farm. Taking me to the track was the next logical step for my Mother. But what if I’d not had the experience of riding Patches through the woods in Stephentown, New York? 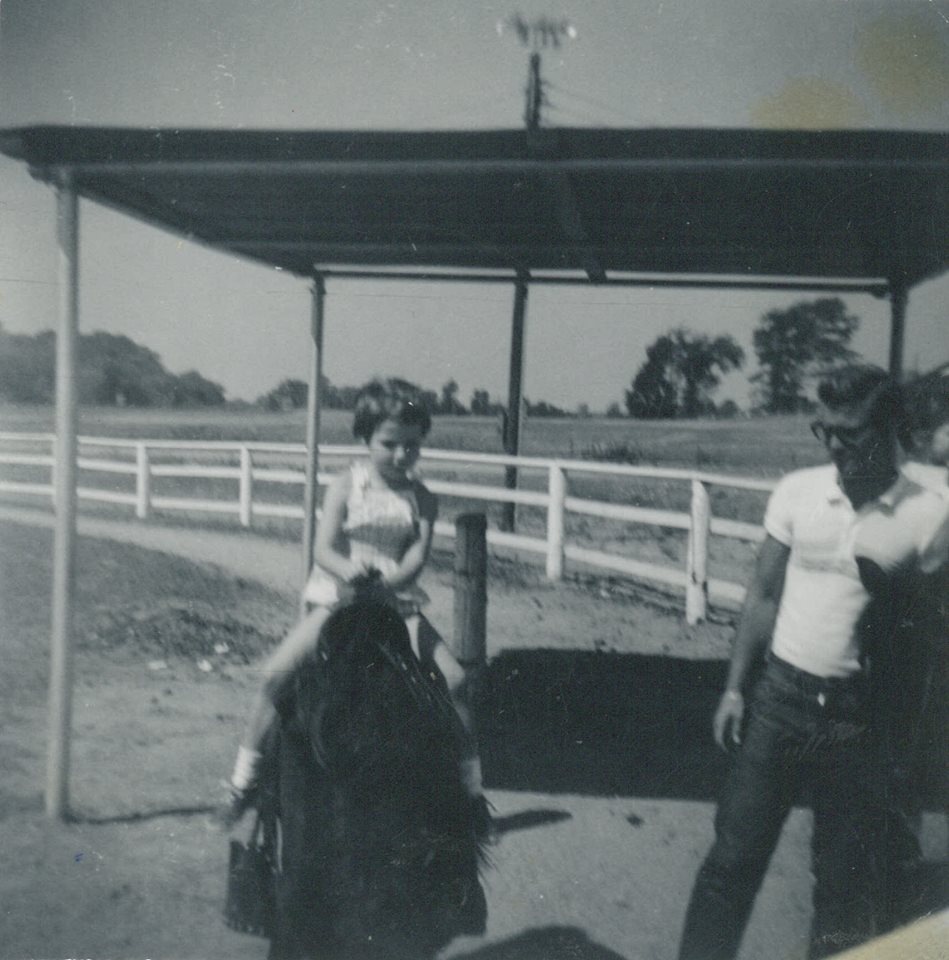 How would Mommy have introduced me to an intimate relationship with The Horse?
I was blessed, in that I had that double one-two opportunity, but most kids don’t. By the time I got to Green Mountain, then Saratoga in 1960–I was in love.
NYRA is providing a safe environment in which children can get up-close and very personal, one-on-one, with a real, live Horse. The outriders–the amazing people who escort race horses to the track–and who ride at break-neck speeds, then gently wrangle runaway horses, virtually every day–will take turns, bringing their beautiful steeds to the Saratoga backyard.
The children who visit the outriders and their horses will have the opportunity to touch–to go eyeball-to-eyeball–with a Horse. And they’ll learn about the horse’s daily routines–both the “ponies,” as outriders’ horses are known–but the routines of racing Thoroughbreds. (N.B., that many of the outdiers’ horses are retired Thoroughbreds. Many are Quarter Horses, some cross-breeds. All are beautiful, strong and majestic.)
This is an extraordinary opportunity both for children and their parents. (If you’re an adult who’s never had the blessing of touching a Horse, I’m quite certain that neither the outriders nor NYRA will mind if you touch. In fact, you’re likely to fall head-over-heels in love, and become even more of a fan.) 🙂
You owe it to yourself–to your daughters and sons–to the sport, itself–to get Thee to the Saratoga backyard and meet a horse this summer.
NYRA wants your children (and you!) to become life-long fans. They’re providing an exciting opportunity for your family to take back the original model–that humans are NOT separated from Nature, but in fact, we are part of Nature, herself.
Go ahead, touch a horse. (With permission–always, only with permission.) Look deeply into her eye. Feel her soul. Encourage your children to do the same, to really experience The Horse. Breathe the same air, feel the Wisdom that emanates from that magnificent,sentient, feeling, thinking being. 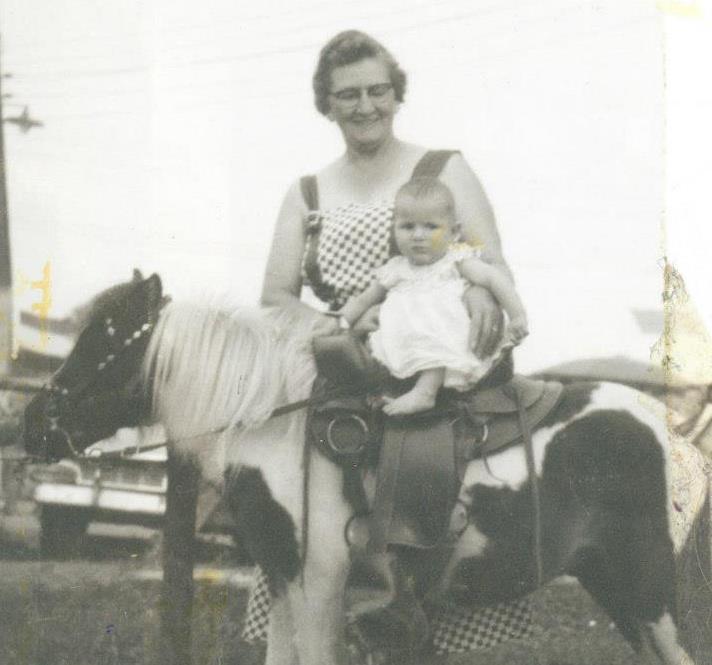 I promise you, that once your child touches a horse for the very first time–your child’s life will be changed, forever and for the better. That first 10-minute relationship will grow and morph into something marvelous. A relationship unlike any other.
And once that connection has taken root–it’s not a far path to becoming a fan of the sport that allows horses to stretch their wings, and fly, all four hooves above the ground, headed for Glory.
And yes–to betting on that hooved angel. Horses first, wagering second.
Join us in the backyard during the Saratoga meet, and take the first step toward a new, deep relationship with your children. Our shared love of horses and racing bound my Mother and me in a way that still is not broken, even 19 years after she died. I want the same for you.
Are you ready to grow your connection with your children–and in the process, help the sport of horse racing grow securely into the 21st Century?
I thought so. Thanks, race fans, for your willingness to jump the gap between being an observer of Nature, and recognizing your own place as part of Nature. For showing your children the way to that very real yet very surreal connection via The Horse.
And thank you, NYRA, for this extraordinary opportunity. That’s all she wrote.
————————————————————————————————
CREDITS:
Photo of Mother Russia, courtesy of Lee Millett.
Saratoga, NYRA logos, courtesy of New York Racing Association.