In upstate New York–just a few miles from our renowned and elegant Saratoga Race Course, an evil man named GERALD (JERRY) HERRON has been abusing horses for years. He abuses and neglects all the other animals on his “farm,” as well.
His most recent offense is that, among other sins, he starved a precious colt to death. YES, he did.
I’m too angry and upset to write anything eloquent: instead, I’m going to give the proverbial keyboard to MR. BRAD SHEAR, Executive Dirctor of the Mohawk & Hudson River Humane Society, to tell you about the horrors. Please read all the way to the end, and follow Mr. Shear’s instructions for phone calls that MUST be placed, in order to get this evil man into prison and animals–especially, horses–out of his hands. If he is allowed to keep animals, he’ll kill them. Period. Do you want to be complicit in his crime, simply because you couldn’t be bothered to pick up the phone and make two calls?
I don’t care if Herron is crazy, certifiably a lunatic. I don’t care if his Mommy left him as a child, and he’s sad so he acts out and hurts animals. I don’t give a damn about his problems. Tough life? Too bad. He has no right–legally or morally–to abuse the animals who were entrusted to him.
Please read, and then act. It doesn’t matter if you live in New York, France or Mars. If you truly care about animal welfare, you’ll care about this, and act. Thank you, very much…

You may have read the news recently about Gerald (Jerry) Herron of Hoosick Falls being arrested for the third time on animal cruelty charges. A 6 month old colt that was seized from his property along with his mother was brought to a veterinary facility and died from malnutrition. Yes, in spite of the best efforts of an equine veterinarian, it was too late and this 6 month old baby starved to death. 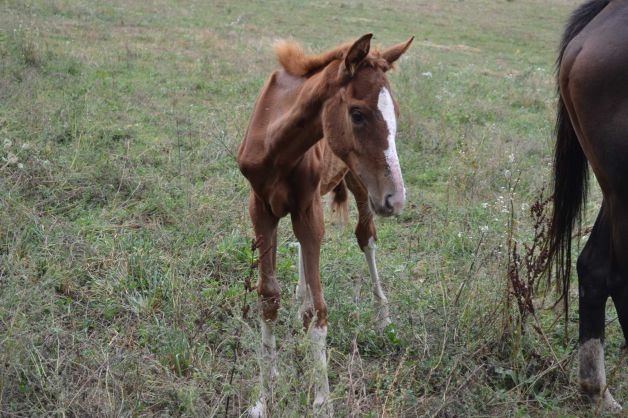 Many people are asking why he is still allowed to have horses, but most people only know a small piece of the story. We first encountered Mr. Herron in 2008 after receiving complaints about the conditions at his farm. We partnered with State Police on the investigation, an arrest was made and the case was handed over to the Rensselaer County District Attorney.
The case then sat on a desk for two years and was plead down to disorderly conduct with essentially no penalties and no help for the horses. In 2011 we went back with State Police and again, Herron was arrested for having horses in similar conditions. Again the case took more than two years to get to court in the Town of Hoosick. Herron plead guilty to one count of animal cruelty, was sentenced to four weekends in jail and was allowed by the court and D.A. to keep the horses. So now we’re back again in the same D.A.’s office and the same court.
These are not just any horses. It is clear from lip tattoos on the horses at Herron’s farm that some of the horses have raced and are being bred for racing. What is not clear is who these horses actually belong to. We are working with State Police now to determine ownership of the horses on the property including the foal that died because additional charges can be brought against the owner.
***Update: I spoke to the Executive Director of the NYS Thoroughbred Breeding and Development Fund and Jerry Herron’s farm has been removed from the Fund’s Directory of Farms. Herron has not received funds since his first conviction for cruelty. Their policy was sent to me which prohibits payments to anyone accused of animal cruelty unless charges are dropped and permanently prohibits payments to people convicted of cruelty. ***
I don’t want this man to get away with cruelty like this a third time and I need you help to stop this from happening. Please make the following phone calls:
1-The Rensselaer County District Attorney’s Office and tell them that this time we won’t accept any deals. Gerald Herron should be convicted of animal cruelty and prohibited from possessing animals. (518) 270-4040
2-The Town of Hoosick Court and tell them we want the harshest possible penalties against Gerald Herron, a three-time offender, including no animals [allowed on his property, or his life]: (518) 686-3335
With your help we can make sure no other horses suffer the same fate at the hands of Jerry Herron.