What do you and Marylou Whitney, Virginia Kraft Payson and Beverly (Peggy) Steinman have in common? “Nothing,” you say?

On what is based your Jump to Conclusion? The fact that those three ladies all are monied, storied and not of your social element? Might it be that you’ve never seen Mrs. Whitney in Pizza Hut? (It happens that I have.) Or Peggy Steinman in the Shake Shack line at the track?
Well, OK. So you haven’t shared a burger with Ms. Steinman in the past…but you can have lunch with her in the very near future. The Jockey Club Safety Net Foundation and Shelters of Saratoga–both absolutely worthy organizations–will benefit from this year’s edition of the Fashionable Fillies Luncheon in Saratoga on Monday, July 27th.
And you can be there. Oh, yes, you can.

Over my many years as both a race fan and media professional in this sport, I’ve witnessed a lot of silly things, one of them being the Tall Poppy Syndrome. You’re probably wondering what that means. A former flame from Australia explained the phenomenon to me: when a poppy rises above the others in the field–her head is higher–it has to be lopped off.

In other words: humans who are–or at least who seem to be–in a stratosphere higher than our own level often are the subjects and objects of ridicule and derision by those who feel threatened. Aesop called it, “sour grapes.” In plain English, it’s jealousy. There’s a niggling thing inside too-many of us, a part of ourselves that just has to put down someone whose very existence makes us feel badly about ourselves.
This, however, is not the problem of the person who unwittingly threatens the one who feels threatened. The problem lies within the heart and (lack of) self esteem of the person who wants to whack down that tall poppy, for the poppy has the right to be tall.
Lest you think that now I’m putting down “average” people like yourself–I’m in your category, mates. I’ll tell you a secret: I grew up in a very poor family. Profoundly poor. As in, until I was six I thought that eggs were meat, because they came from chickens. And chickens were meat.
That may sound funny, but I’ve spent a lifetime with my poor upbringing sitting Right Here, on my right shoulder. Oh, make no mistake–I love my Mother, and I love my Grandmother, and I miss them both, every day of my Life. But they had no resources, no educations and no one to guide them out of poverty.
The best piece of advice that my Mother ever gave me was that, the most important article of clothing I’d ever wear was not a white wedding gown, but rather the black academic robe I’d don when I graduated from college. And of course, she was right.
Now, we’re here to talk about the Fashionable Fillies Luncheon in Saratoga on 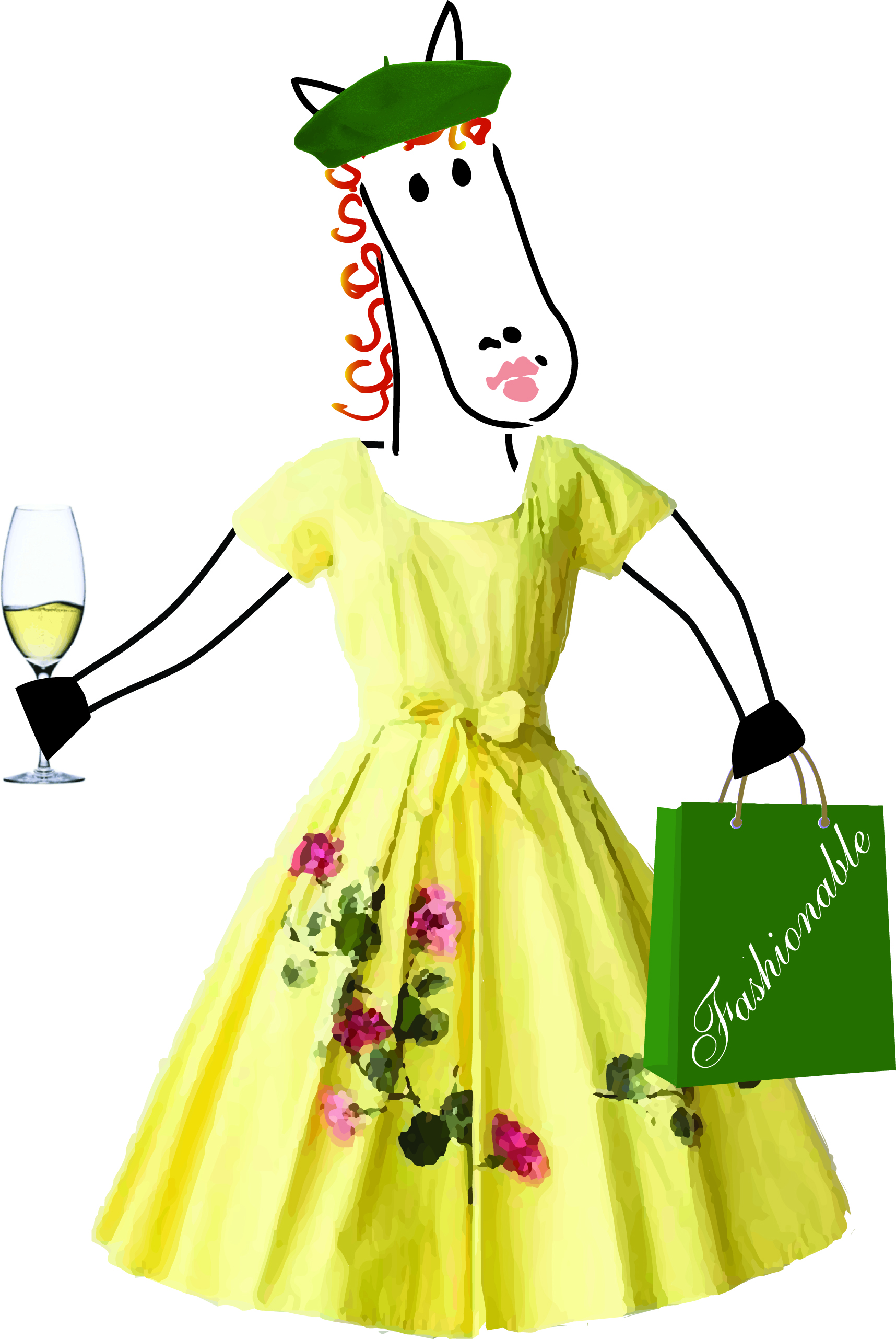 July 27th, at the Hall of Springs. 11:30AM, Silent Auction. 1PM, Luncheon, followed by a Fashion Show, courtesy of The National, Frivolous and Miss Scarlett Boutique.
But this IS about the event, even though it may seem that all I’ve told you thus far is that I grew up poor. But that’s only half the story.
I earned Mommy’s coveted black academic robe in 1988–at age 32–at Mount Holyoke College. But during the years before I commenced, I met women at college, with whom I had nothing in common, or so I thought at first. They were Vanderbilts, Astors and daughters of international heads of state. Tom Cruise and Prince Andrew were visitors to my dorm. My dairy farmer family from the 1960s–all except Mommy and Grandma–said that I was trying to fit in where I didn’t.
But that’s the thing: I did fit into Mount Holyoke. I fit in because I was intelligent, and intellectual acumen was the Great Equalizer.
I got to know the Vanderbilts, Astors and the like–and they were nice. We all respected each other. There were no class lines, just lines into our classrooms. I emerged from that experience in May of 1988 with a completely different persective.
Armed with this new look at the “rich folks” of society, I volunteered at the National Museum of Dance, almost immediately after graduating. And I made a point of attending the Museum Ball that August. And–but now I wasn’t surprised, at all–I met a large, warm herd of well-to-do human beings, and--they were nice. They were fun! We danced, we bid, we dined, we laughed together.
And not a single soul asked me my monetary value. Go figure. If they cared, they didn’t show it, for all were gracious to my friends and me.
Mommy said often that, one need not have money in order to have class, and she was right.
I fear that too many of my regular readers may be stuck in a rut, that of being content with Life as it is–to the exclusion of being willing to try something new and exciting.
So I throw down the gauntlet at the feet of my readers today, valid for the next month: Women, set a goal for yourself, of challenging your own way of thinking: if you feel threatened by people outside your normal circle of friends and associates–step out. Try something new. Suck up your fear, and step into a pretty dress and heels. Now, take your nervous knees and canter on over to the Hall of Springs on July 27th.
Oh, taking such a brave step forward may be nerve-wracking, for sure. You probably won’t know a darned soul at the Fashionable Fillies Luncheon–but as “they” say, “Strangers are just friends we haven’t met yet.” Just walk in there, make eye contact, smile graciously and extend your hand for shaking. (And for God’s Sake, please put your hand into it: remember, hands have bones.)
The worst that will happen is that you have a delicious lunch–maybe buy some beautiful things in the Silent Auction–and make at least one new friend.
The best that will happen is that you’ve grown up and put away childish attitudes.
The best-best thing that will happen is that your lunch money has gone 100% to helping your fellow human beings via the Jockey Club Safety Net Foundation, and Shelters of Saratoga.
Both organizations strive every day, 24/7/365, to help other human beings make Lives for themselves. While their Missions seem to be different — just like you and Peggy Steinman–at the core simply lies humanity.
Step outside your fears: contact Nancy C. Kelly at The Jockey Club today, and make your reservation for the Fashionable Fillies Luncheon in Saratoga on July 27th.
Neither of these scenarii should make you nervous:
— the possibility of meeting nice women, and seeing long-held stereotypes shattered
— you, helping to raise money to help local Saratogians, and those involved in the horse racing industry, to lead fulfilling Lives.
This is a rare situation in which everyone wins: jump on this, as these opportunities are rare, and special. Like you.
=====================================================
Nancy Kelly:
nkelly@jockeyclub.com
(212) 521-5305
(518) 226-0609 (After July 17)
http://www.tjcfoundation.org/The Jockey Club Safety Net Foundation is a charitable trust which provides, on a confidential basis, financial relief and assistance to needy members of the Thoroughbred industry and their families.
Adversity or hardship presents itself in a variety of ways, so The Jockey Club Safety Net Foundation remains flexible when it comes to the support it provides. Assistance can come in any number of forms, including financial aid, medication, surgical and hospital costs, therapeutic equipment, voice-recognition computers for quadriplegics and wheelchair-accessible vans, among other needs. To increase its ability to help in as many instances as possible, the Foundation maintains communications with chaplains based at racetracks throughout the country.
http://sheltersofsaratoga.org/Shelters of Saratoga’s mission is to provide individuals with safe shelter, supportive services and sustainable strategies to end homelessness in the Greater Saratoga region.