Visit Saratoga.com For Everything Saratoga
Enter Giveaways Advertise
Note: Saratoga.com is not responsible for posts and comments written by non-staff members.
Home  »  Mare's Musings  »  Beauty. Speed. Endurance. Heart. Americans, Meet the Arabian Horse.
The Dubai World Cup is the richest collection of races on Earth, and yesterday’s show at the magnificent Meydan Racecourse was no disappointment. Americans who love horse racing were glued to their TVs from the very first minute of the action. And, oh–that first race? NOT the second race on the card, the first: the EMAAR Dubai Kahayla Classic–went off at approximately 8:30AM Eastern Time here in the U.S. (Those not used to being up and ready at that hour to watch horse racing, had to set their alarm clocks–but it was well worth the effort.) If you missed that first post at 8:30AM Saratoga Time, the Dubai Kahayla Classic Sponsored by Emaar, you missed a beautiful sight. Fourteen majestic horses took flight. And the American-bred TM Fred Texas won the race, resoundingly…

The EMAAR Dubai Kahayla Classic isn’t a “baby” race, a claimer or any other brand of less-than-challenging action. This race is a mile-and-an eighth (2000 metres, approximately 10 furlongs). And this race is worth watching next year, if you missed it yesterday. You should watch, if for no other reason than the fact that the horses, five years old and up–are Arabians. (And now that you’ve missed the 2012 edition of the race—you’ll just have to find Arabian racing elsewhere. See links below.) 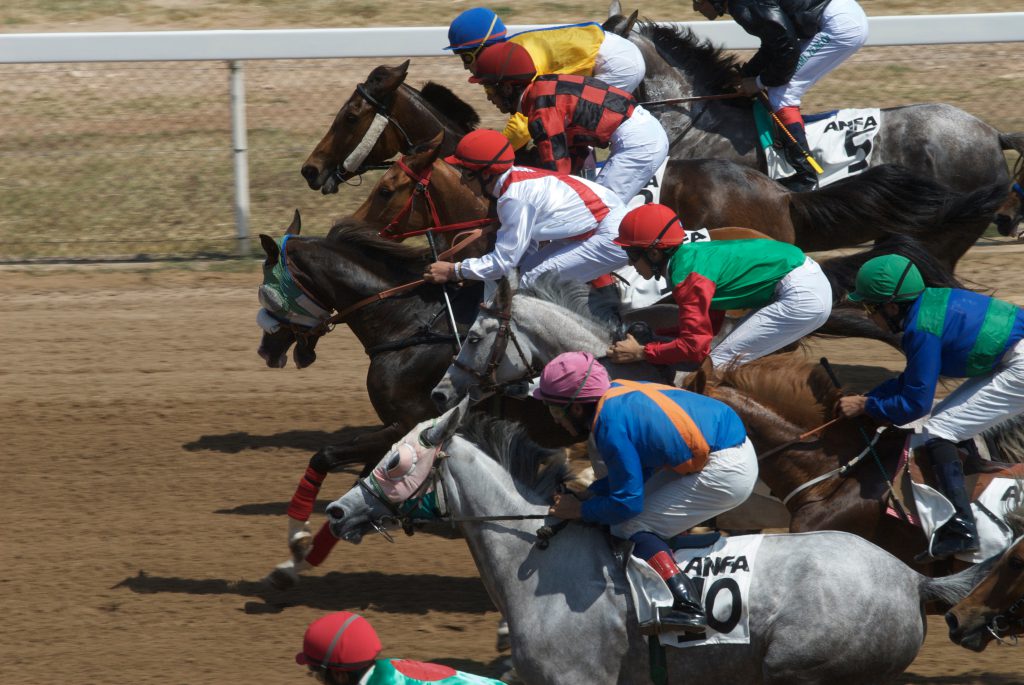 Arabian horses are the foundation ancestors of our beloved Thoroughbreds. Arabians look foreign, almost alien, to those of us who are only familiar with the Thoroughbred conformation; straight profile and buff musculature. Arabians, whose lines can be traced back 5,000 years, were the three founding sires of the Thoroughbred breed: the Darley Arabian; Godolphin Arabian and Byerly Turk all hailed from the Arabian peninsula. All three sires were bred with more sturdily-built English breeds to create that which we now know as the Thoroughbred.

Every Thoroughbred alive, in order to prove that indeed it is a Thoroughbred, must be able to trace its ancestry on both sides (dam and sire/mother and father)–to at least one of the three founding sires. And those three sires, Arabians all, contributed many remarkable attributes to our Thoroughbreds. Attributes that have endured four centuries so far. An esteemed member of Jordanian royalty–herself an accomplished, brilliant horsewoman–describes it far better:

“…the Arab horse is precious for its qualities: BEAUTY–which has become a bit of a two-edged sword…in fact they are incredibly TOUGH. Witness the fact that most endurance rides are won by Arabs and part-breds: the bones while fine are very dense, and the heart 1/3 larger than other breeds–hence the quicker pulse recovery after exhaustion. And mentally tough: they fight illness and handicaps much longer than many other breeds. PREPOTENT: Arabs are crossed with almost all other breeds as they ADD qualities without detracting in any way. INTELLIGENT: cutting people like to use them as they THINK for you and reduce the effort needed by cowboys and gauchos when herding other creatures. BRAVE–(I am not pro-bullfighting, but rejoneadores cross the Spanish horses with Arab to add courage facing the bull in the arena.) And FRIENDLY: they will follow a stranger across a field long after the hope of treats has gone just because they are intelligent and, unless–God forbid–horribly abused like many modern “show” Arabs–they like people!

There is a saying attributed to the Prophet (Mohammed) (PBUH), that, ‘…if your neighbour owns a horse and you do not, open a window in the wall to allow the Blessings to reach you from next door.’ There is a legend that they were created beautiful to attract people’s attention–so that they could then perform their various missions of helping humans and filtering out negativity…but then people began to want to own and possess them for their own egos–‘and greed spoils everything…'”

[In her capacity as Director of the Royal Stables of Jordan for the Preservation of the Arabian Horse, Princess Alia initiated the festival of the “Arabian Horse at Home” in 1988 (now a yearly event). She also organized the Middle East Championships for Purebred Horses.]

The face of the Arabian horse is distinguished by its concave (“dished”) profile, prominent eye, large nostrils and diminutive (“teacup”) muzzle. (There is a range in this description, of course–racing Arabians run the gamut from extremely-dished, prominent and teacup to barely-so.) The extreme of this look makes the breed appear like an alien space traveler–if you’re used to Thoroughbreds and Quarter Horses.

But closer inspection reveals this look to be wildly appealing to both the eye and the heart. This is the look of centuries of pure, meticulous breeding–all the bad has been bred out of them, all the good–in. Lovers of Arabians are almost obsessively enamoured of the breed–and that love springs from looking into that eye, and embracing that singularly unique beauty.

Delicate in appearance yet durable of the leg and glute, the Arabian is a breed worth investigating–and watching. To see desert deities gliding over their native ground, and in Europe, the US and Asia–check out the links, below. If your curiosity is whetted thus, you can find Arabian racing in many pockets of the United States, and everywhere on Earth.

I invite you to come on this journey with me–I’ve discovered the Arabian horse, and hope that you will, too. (I have not abandoned my adoration of the Thoroughbred–a human heart can love more than one, and love equally.) Come with me on this magic carpet ride: experience the sense of timelessness and grace that inspired the first Bedouins who observed Arabian horses to utter, “The wind of Heaven is that which blows between a horse’s ears.”

Many thanks to Mats Genberg, IFAHR.