Visit Saratoga.com For Everything Saratoga
Enter Giveaways Advertise
Note: Saratoga.com is not responsible for posts and comments written by non-staff members.
Home  »  Mare's Musings  »  Horsepower: How “Car Talk” and Laughing ’til it Hurts Breathed Life into f!lly Racing Radio

Those of you who are friends–in “real life,” or on Facebook–know that last week was a rough one for me, and for anyone who loves the NPR (National Public Radio) show, “Car Talk.”

Tommy’s death hit me like a brick in the face. I know that it hit millions of “Car Talk” fans similarly. From 1977 until the brothers retired two years ago, the show was a blessing and a joy for many people. For two years, the show has continued in syndication on NPR stations.
The key to their tremendous success, and the longevity of the show, was that they took radio talk and stripped it down to the basics. The brothers dispensed advice regarding car repair, lacing their conversations with callers with pithy, witty repartee.and hyena-like laughter.
In other words, they were Regular Guys. Both over-educated (masters, Ph.D.s, etc.), but still they were just Average Joes. Italian-Americans from Boston, they made no effort to sound “mid-Atlantic,” and drop their Rs. They had thick, Boston-Italiano accents–the accents weren’t going anywhere–and we loved them for it…

I could write an entire dissertation about Tom and Ray. I could write a book, but I’m sure that they chose their biographer years ago. Today, I’ll just tell you how the Magliozzi Brothers crept into my heart and into my psyche. And how “Car Talk”–a radio program presumably about car repair and horse power–led me to start f!lly Racing Radio, and work toward radio equality for women in horse racing media.

I came late to the game as a fan of “Car Talk.” The show began in 1977, but I heard them for the first time in June, 1996. I remember exactly where I was at that moment: in the car of my Bostonian friend, Maura. It was a bright Saturday morning, 10AM, so she dialed the radio to the local NPR station. (WBUR in Boston, of course: Ground Zero for the show.)

I wondered what was wrong with Maura, that she wanted to listen to an hour of two men discussing cars. WHO would want to listen to a show on pistons and tappets? I tried to talk Maura out of it, but she laughed at me and repeated, “Just wait. Just WAIT…”
It didn’t take long for me to realize that, while cars were a BIG love of the two brothers–and that, indeed, they advised callers about their car-related problems–the soul of the show was about love, passion and fun.
Ray and Tom Magliozzi loved each other. It was evident from their jovial, not-so-gentle brotherly banter. They felt passionately about cars. They loved their callers, and we, their audience members.
And, for God’s Sake, they had FUN. I cannot recall laughing harder in my life, than I did that morning in Maura’s car. One of their callers was a Massachusetts State Trooper, who told a story about a “Donna.”
Oh, you don’t know the definition of a “Donna”? Well, OK, l tell you:
Ray and Tom pronounced, years ago, that, IF you see a red muscle car (Camaro, Firebird, etc.), and there’s a big-haired blonde woman driving–snapping gum and listening to heavy metal—it is inevitable that the young woman’s name is Donna. (Pronounced, “Dawna,” in Bostonian.) This has been the experience of the Magliozzi Brothers.
Well, that day of my “Car Talk” baptism, this State Trooper called in to tell the guys about an experience he’d just had: he’d been on the Mass Pike (Massachusetts Turnpike), sitting and watching for speeders.
A red Camaro went FLYING past him.
She was going 90mph.
Trooper pursued, stopped the Camaro.
As he approached, he saw that the young woman behind the wheel had big, blonde hair. And heard that Metallica was blowing out of her radio.
Laughing to himself, the Trooper approached the driver,
“Listen, Dawna…” he began
“HOW’D you know my name’s DONNA?!?” she responded, snapping her gum and looking utterly bewildered.
Click and Clack (Tom and Ray) laughed like hyenas.
Maura cackled merrily.
I laughed so hard that I cried.
And from that moment forth, I was a die-hard “Car Talk” fan.
(Note here: Tom Magliozzi’s laugh. Now, tell me that that’s not infectious:
https://drive.google.com/file/d/0BzVx8YyZB2wuZHRjQnlCTDZMeXc/view )Also in that crystalline moment…I realized that life–and work–didn’t have to be boring.
That one need not drag one’s self to work–hate one’s job for eight hours, every day, for 40 years, then retire and die.
I realized that YES, it IS possible to have a BLAST doing your job.
Tom and Ray DID did “Car Talk” for free for WBUR for the first 10 years.
Then things turned around, and it became their jobs.
Imagine that: they got PAID to do something they LOVED to do! Who wouldn’t love to take phone calls–laugh with callers–laugh with (and at) your business partner–and take home a paycheck?
Would that feel like “work,” as the ridiculous Puritan Work Ethic has drummed the warped definition into us?
No, that would feel like PLAY.
And where–oh, where?–is it written, that one cannot PLAY and get paid for it?
That Play cannot be your job?
I’ll tell you where that’s written: Nowhere.
Ray and Tom Magliozzi showed the world that, first, public radio didn’t have to be so God-awful serious, 24/7.
They showed the world that two “real” people could make GREAT radio--and win Peabody Awards for it.
And they showed me–a paesan Italian-American, middle-aged woman–that indeed, living my vocation as a horse racing media person should be fun AND lucrative.
For decades, I’d been told that I have the voice for radio. (Yes, go ahead, say it: And I have the FACE for radio, too.)
😉
The summer of 2013, I approached NYRA (the New York Racing Association), to sponsor my first-ever radio show, f!lly Racing Radio, on a local (upstate New York) station.
I did seven shows, during the seven weeks of the Saratoga horse race meet.
From the first moment I sat in that chair in the studio and slapped on the headphones–I was hooked. I shan’t wax poetic about the intoxication of speaking into a mic in a “dead” room. Of the joy of working with a producer like John Meaney, who made me sound so good AND smart.
But, oh, in that moment I knew for sure that horse racing radio was destined to be part of my vocational calling in the sport’s media world.
In a nutshell: the show on Blog Talk Radio for a few months–took a break during this past summer–but tonight (Monday, November 10th, 2014), f!lly Racing Radio is back.
Of course I hope to grow the show, and to move from Blog Talk Radio to another platform, where I’m appreciated, as they say.
It will come. All I know this afternoon, as I prep for my first show since my hiatus, is that I intend to have fun. 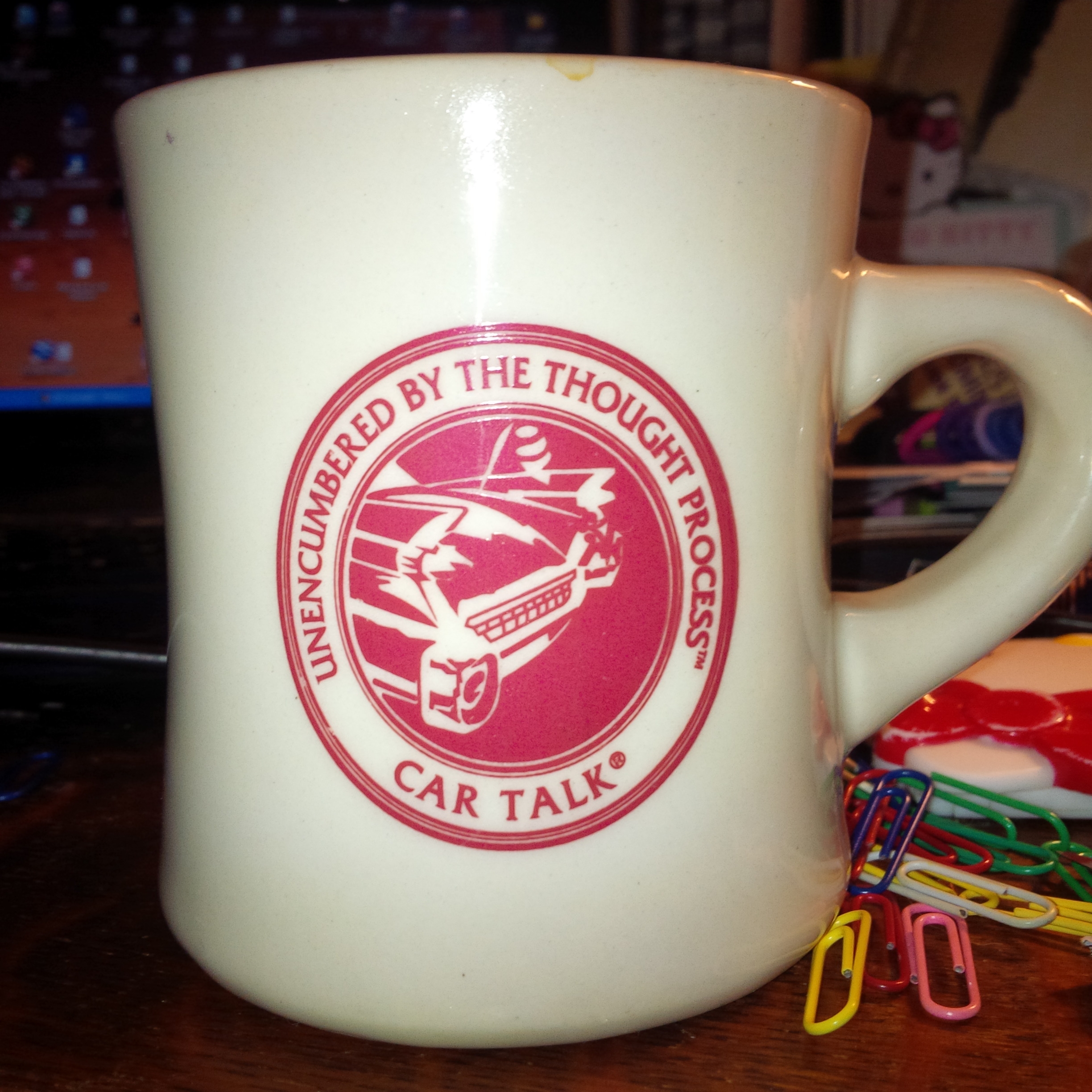 I cried like a baby when I heard of Tom Magliozzi’s death. His passing felt like a death in my own family, for indeed, Tom and Ray are part my life story. So in that sense, they are mi famiglia.
I will dedicate tonight’s show to Tom Magliozzi, even as I drink my coffee from my “Car Talk” mug. Without Tom and Ray–without their laughter, their joy and their open invitation to anyone who was listening–to have fun and to enjoy life–I don’t know that f!lly Racing Radio ever would have come into being.
I’ve been fired up for almost two decades, to do horse racing radio. I merely hoped to do it and to succeed, in the beginning of 1996. But that golden day in June of that year, in a car on Massachusetts Avenue in Cambridge–I began to nurture the notion that I, to, could work in radio, to give joy to others AND to myself–and that yes, it could be my JOB.
Thank you, Tom Magliozzi. God rest your good, funny, brilliant soul. God comfort you, Ray Magliozzi, and your entire family–and all we, your fans, who feel like your extended family.
Mille Grazie, not only for the memories, but also for the inspiration. Without you Magliozzi Brothers–I, and many others–would continue to think of work as drudgery, and Life as something to be merely endured. You may think that all you did was go to work and have a great time together for three decades, but even as you advised us on how to change tires, points and plugs–you changed lives, including mine.
—————————————————————————————–
Media Credits:
“Car Talk” logo, mp3 of Tom’s laugh and photo of Ray and Tom Magliozzi, courtesy of www.cartalk.com
f!lly Racing Radio URL for tonight’s show:
http://www.blogtalkradio.com/fillyracingradio/2014/11/10/flly-racing-radio-is-back-and-ready-to-rock