Visit Saratoga.com For Everything Saratoga
Enter Giveaways Advertise
Note: Saratoga.com is not responsible for posts and comments written by non-staff members.
Home  »  Mare's Musings  »  Memories of Cigar: Sensitivity and Grit, Guts and Glory.

It’s October 8th, 2014, and by this time everyone in the world of international horse racing knows that Cigar, one of the world’s greatest Thoroughbreds ever, has died. 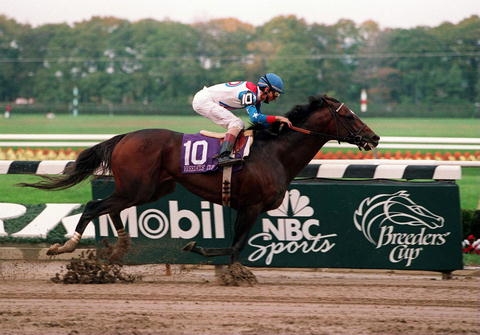 Race fans all know Cigar’s background and statistics; I have nothing to contribute to the enormous body of knowledge about the magical horse’s achievements.
The only things I have to offer are personal memories, but maybe those, too, will help add to the story of how this one extraordinary horse touched human souls, and give insight into the inner workings of such a horse of steel…

I found out early this morning that the magnificent Champion had died, and I’ve been crying ever since. Somehow I–like many of you–just assumed that Cigar would live forever. It never crossed my mind that he could be felled by anything as mundane as illness and old age.