While attending law school in Southern California, Saratoga County native Christopher Martell discovered his love for home brewed beer and the brewpub culture. After earning his J.D. in 2003 and master’s in Law, he returned to the Capital Region to work as an attorney.
But in 2012, he and his brother, Brian Martell, had other ideas and took their home brew hobby and turned it into a successful business.
Seven years later Christopher Martell, CEO of Druthers Brewing Co. based on Broadway in Saratoga Springs, was named the recipient of the U.S. Small Business Administration’s (SBA) Syracuse District 2019 Small Business Person of the Year Award.
According to SBA Syracuse District Director Bernard J. Paprocki, Martell was nominated for the award by the New York Business Development Corp. (NYBDC), and selected for the honor based on criteria that includes: leadership, success, growth in sales and employees, and community contributions.

ON Semiconductor Corp. and GlobalFoundries entered into an agreement in April for ON Semiconductor to acquire a 300mm fab located downstate in East Fishkill.
Officials said the total consideration for the acquisition is $430 million, of which $100 million has been paid at signing of the definitive agreement, and $330 million will be paid at the end of 2022, after which ON Semiconductor will gain full operational control of the fab, and the site’s employees will transition to ON Semiconductor.

Saratoga County is outpacing the Capital Region and New York state in jobs, wages and economic impact in the manufacturing sector, according to the inaugural Saratoga County Manufacturing Index released in April by the Saratoga County Prosperity Partnership.
Officials said at the same time, it reveals a need for heightened workforce development initiatives to ensure the presence of skilled employees to sustain its growth. 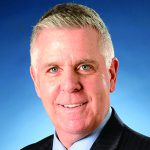 NBT Bank has hired James Brown as an investment officer. He is based at NBT Bank’s Saratoga Springs office.
Brown has nearly 30 years of experience in the financial services industry. Prior to joining NBT, he was a relationship manager for Bank of America’s private wealth management firm, U.S. Trust.
Brown earned his bachelor’s degree in business administration from St. Michael’s College. He is a graduate of the New York Bankers Association’s Fiduciary Investment School and completed the advanced consultative sales training program at the Cannon Financial Institute.

By Susan E. Campbell
There is a transformation underway at Greenfield’s Brookhaven Golf Course and central to the changes are new owners and a new name for the club’s restaurant, The Full Course.
Tina Pethick has worked in the restaurant business since 1982, including 15 years at Perillos Golf Course near Malta, and had been looking into buying a restaurant for some time.

By Jennifer Farnsworth
FACES on Beekman Street has undergone an 800-foot expansion that is a reflection of the success the spa has experienced.
Owner Crystal Cobert Giddens has a passion for what she does that can be felt throughout the new fresh space—something she had a vision of since first opening her doors in 2017.

ReWire Energy in Saratoga Springs has announced a new stage in its corporate growth that will align its software development, energy analytics, financial modeling and utility program management expertise with market needs, including serving commercial real estate development and management, municipal and utility customers, and energy and technology customers.

by Andrea Palmer
Debreen and Tony Oliva opened Racing City Brewing Co. 14 months ago and have steadily grown since. The couple also owns Oliva Vineyards winery, making wine for the past decade.
Recently, they have created a Cornhole venue and weekly competition at the brewing facility.
Cornhole leagues meet at the 250 Excelsior St. location in Saratoga Springs every Thursday night. Teams are paired through a blind draw, with names pulled out of a hat. It is a double-elimination tournament with a winner every night. At the end of the eight-week session, a ninth week playoff takes place.
“It’s a real nice group of people on a regular basis,” said Debreen Oliva. “It’s a great activity inside during the winter because there’s not much to do if you don’t like being outside in the cold. And it’s great in the summer when you want to enjoy the good weather outside.”

By Susan E. Campbell
Saving Face barbershop is a recent business addition to West Avenue, one of the growth areas in Saratoga Springs. As new commercial spaces and residential buildings continue to go up and activity on the west side increases, shop manager and master barber Jeremiah Cregan said he is pleased with his location.
“I originally wanted a shop on Broadway in the center of things,” Cregan said. “But as I dove into it I thought, I want to target locals who do not want to worry about traffic in the summer or finding a parking space.“
He narrowed down his choices to a few locations on West Ave, but ultimately the space that Dance Lab had vacated at 68 West Ave. proved to have the amenities he needed.