RASP Inc., a company that designs and builds control panels, plans to add more warehouse and office space adjacent to its current buildings on a 30-acre campus in Moreau.

CEO Ron Richards said he sees the new construction as a plan for the future that will allow the company to hire additional people and seek more business.

RASP currently has 34 employees, including engineers and panel builders. Most of them are panel builders, who are often hard to find. Richards said they prefer to hire people with some experience in electronics but, when necessary, they will train new people. Engineers, on the other hand, seem readily available.

“We have been hiring throughout this year,” Richards said, but they are running out of space to put the new employees.

The company builds control systems for other companies. Richards said the names of their customers are confidential, but include chemical companies, packaging companies, and a stone quarry.

The state is providing $7.3 million to help fund a proposed $21 million, 60-unit affordable housing complex, called Riverview Apartments, in the village of Corinth.

The project is a joint venture between Corinth-based Hudson River Community Credit Union and RISE Housing and Support Services, a Saratoga Springs nonprofit organization founded in 1978, whose mission is helping people with mental health, substance use and other life challenges stay safe and healthy in the community.

Officials said 30 apartments will be reserved for homeless individuals with mental health illnesses who will have access to rental subsidies and on-site supportive services. The project will create eight jobs, including two case workers and a registered nurse to support residents.

Another 15 apartments will be strictly for seniors and there will be 15 more for community residents.

Three years ago, the credit union’s board of directors identified quality, affordable housing as the biggest challenge faced by many of its members living in Corinth.

Among its projects was the redesigned of the concession area at Saratoga Performing Arts Center, including siting the new buildings and redoing the stormwater management plan. The company is also working with Envision Architects to develop a new indoor/outdoor market complex in Glens Falls.

It is also redoing part of Albany’s Empire State Plaza to alleviate drainage and stormwater problems.

Loyola started the company in order to work on technical problems like stormwater management, drainage issues, subdivision site plans, and master plans for residential subdivisions. CLA can site the houses, plan the roads, look at driveway features, and, when they have it all planned out, make a presentation to a planning board and get the site plan approved, Loyola said.

The state Office of Parks, Recreation and Historic Preservation has enhanced its Parks Explorer mobile app to orient visitors and provide helpful wayfinding information when in the parks and on the trails.

The multiple new enhancements are in addition to the app’s information about the destinations and activities available throughout the Empire State’s parks and historic sites.

“Since its introduction, the Parks Explorer app has been a useful and easy way to plan your next outdoor adventure, and now with this latest release it delivers an elevated visitor experience with interactive mapping tools and improved wayfinding,” said Parks Commissioner Erik Kulleseid.  “Whether you’re new to a park or a seasoned hiker on the trails, the new map features will help you explore the parks and discover new favorites more easily.”

The new features include upgrades to trail mapping functionality such as planning hike distance using the new trail mileage tool, offline maps for use when connectivity is a challenge, and live maps for use on Wi-Fi or with good connectivity. 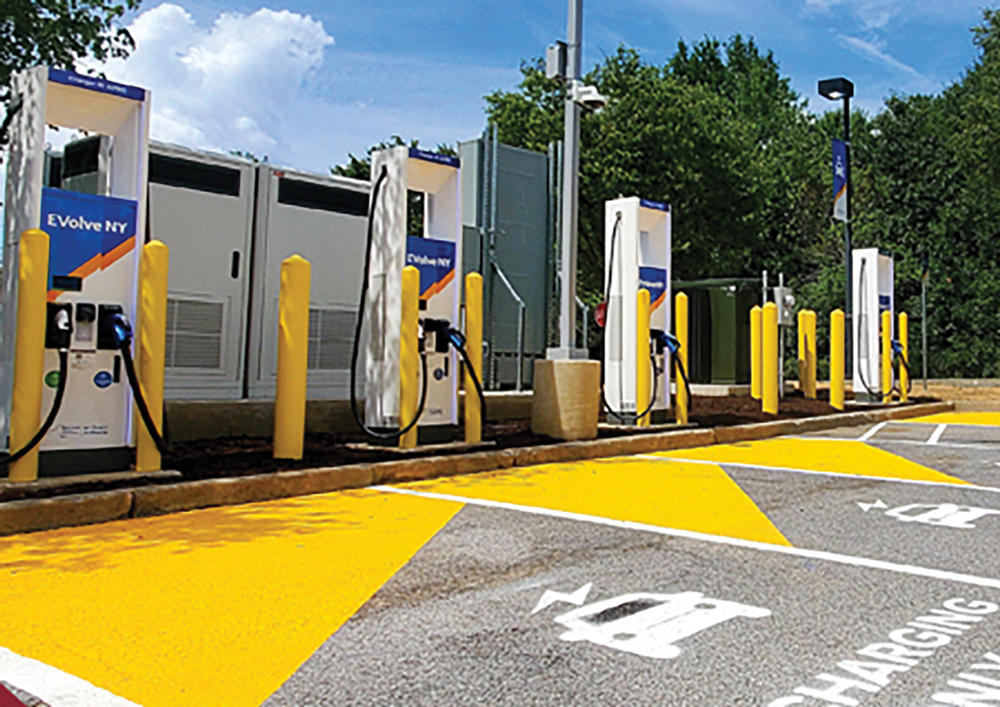 Stewart’s Shops is adding electric car battery charging stations across many of its stores.

Officials said the chargers are powerful enough to provide a full charge to a electric vehicle in just 15 to 30 minutes.

The DC fast chargers have three kinds of plugs to make sure an electric vehicle of choice can stop in and get a charge on the go. EVolve New York’s chargers are available to all non-Tesla electric vehicles.

Officials said  some charging stations will have a Tesla adapter.

Stewart’s Shops currently has three Tesla supercharging stations throughout New York with plans to expand the program by installing two more by the end of 2021.

The pair took over operations of the golf club on July 7.

Longtime owners Robert Van Patten Jr. and his wife, Kathy, decided to sell the course in order to spend more time with their children and grandchildren. The club was built in 1968 by Van Patten’s father, local builder Robert Van Patten. In 2002, the public course was reconfigured, and a 15,000-square-foot banquet hall, The Vista, was added to the property.

According to Orcutt, he became interested in purchasing the golf club after Neil Cherkosly of Upstate Appraisal Services made him aware that the property was for sale.

“He sent me all of the information and it looked really great on paper. That prompted me to ask for a meeting with the Van Pattens, Robert and Kathy. We had a great conversation and walked the property. Seeing what they did with the property in the years that they owned it was impressive.”

As a result of that one meeting, Orcutt and Mann offered the full asking price for the property. Their offer was accepted by the Van Pattens, who received four other offers for the club.

“It was a straight up business transaction. I saw a terrific value in the property itself. It’s a profitable business that in my opinion has the ability to be much more profitable,” he said. “It wasn’t being sold because of an inability to be profitable or because it fell into disrepair.”

As the second phase of construction for Skidmore’s Center for Integrated Sciences advances on schedule this summer, President Marc Conner helped commemorate an important milestone in the raising of the project’s East Wing.

Skidmore officially celebrated the completion of the North Wing in late March during an outdoor, socially distanced ceremony.

The Capital Region’s own MLB Construction is managing the project, currently overseeing about 20 different contractors on site.

“This is a great day as we continue to see incredible progress in this game-changing project for Skidmore’s students, faculty and staff,” said Conner. “These beautiful, well-equipped new facilities are expanding learning and research opportunities not only in the sciences, but between and among so many areas of study at the college.”

The East Wing and the renovation of the newer portion of Dana Science Center comprise Phase II of construction and are slated to open in time for the fall 2022 semester.

The East Wing will be home to the IdeaLab makerspace, a core component of the CIS project that represents the spirit of integrative learning at the heart of this largest academic initiative in the College’s history, officials said. As a hub of collaboration and interdepartmental synergy, students and faculty will work collaboratively and across disciplines in the new space to explore creative solutions to some of today’s pressing issues.

Long Island developer, thoroughbred owner, and NYRA board member Michael Dubb has partnered with The Adelphi Hotel owner Larry Roth to return the 128,000-square-foot Rip Van Dam Hotel in the heart of downtown to its original grandeur.

Built in 1840, the Rip Van Dam, is located at 365 Broadway next to The Adelphi Hotel at 353 Broadway in Saratoga Springs. The $50 million renovation and expansion project has received site plan and design review approval and is awaiting an architectural review.

“I never really had intended to get involved in real estate development in Saratoga, but two projects found me. I didn’t find them,” said Dubb.

In addition to the Rip Van Dam project, Dubb is also in the process of developing 53 lots in Oak Ridge, a luxury housing development located just five minutes from the track.

“I thought the land was so beautiful that I just couldn’t pass it up,” he said.

By Andrea Harwood Palmer
Local developer and engineer Scott Lansing is partnering with the Jersen Construction Group of Waterford on an expansion of Sitwell Plaza, a mixed-use property off Route 9 in Malta.
Sitwell Plaza is comprised of three buildings. Two are built and occupied by tenants. The expansion involves building a third—a 12,000-square-foot structure that is under construction.
Lansing, founder of Lansing Engineering in Malta, said he has a “great working relationship” with Dave and Ken Jersen. “We’ve been working together about 10 years or so now on other properties. They were and are integral to this project,” he said.

By Susan Elise Campbell
The second phase of Oak Ridge, a luxury housing development nestled between Saratoga Lake and Saratoga Race Course, will be constructed by Beechwood Homes under the leadership of founder Mike Dubb and his son and partner, Steven Dubb.
The project will add 53 homes with prices ranging from $850,000 to $2 million-plus. After 35 years building thousands of single-family homes downstate, this is Beechwood’s first project in the Saratoga area.
The subdivision’s original developer was J. Snyder Builders, who approached Dubb about continuing the project Jeff Snyder had started with 40 homes.