Regan Development has plans to transform the former Victory Mills, a five-story, 230,000-square-foot manufacturing facility that closed nearly two decades ago, into 186 residential apartment units and a commercial microbrewery.
The building is in the Village of Victory Mills in the northeast part of the town of Saratoga, southwest of Schuylerville.
The Saratoga County Prosperity Partnership, involved in the project, calls it one of the largest economic development initiatives in the past decade in Saratoga County; a $60 million project that will breathe new life into a long-vacant industrial building.
A Westchester County-based entity that specializes in redevelopment projects, Regan Development has done other projects in the area and has a portfolio that includes more than $384 million in new construction and adaptive reuse projects.

By State Sen. Jim Tedisco
“I love New York” is New York’s slogan.
Unfortunately, too many people are saying “I’m leaving New York!”
The millions who have fled our state and those who are now contemplating their exodus to a more taxpayer-friendly state have one thing in common: No one wants to be the last one left in New York to pay for our state’s overzealous taxes, regulations, mandates and laws.
New York’s motto is “Excelsior” or “ever upward.” It should not signify “ever-higher taxes.”
While there’s been some positive changes, such as the success of the tax cap in holding the line on property tax increases, I’m not going to sugarcoat it and say everything’s coming up roses.
By any reasonable metric, New York state and Upstate New York is economically struggling. Consider these startling statistics:
The Empire State is ranked number one in the nation for highest tax burden.
New York is ranked 50th in the nation for “Tax Freedom Day” (May 3) when taxpayers symbolically pay off all their tax obligations on the federal, state and local levels and start pocketing their hard-earned money.

Some 13 projects in Saratoga County received a total of nearly $5.5 million from New York state as part of this year’s Regional Economic Development Council grant program.
More than $761 million in economic and community development funding was awarded through Round IX of the REDC initiative statewide.
Since its inception in 2011, over $6.9 billion has been awarded to more than 8,300 projects that are projected to create and retain more than 240,000 jobs statewide through the REDC process, state officials said.
Key among them is $2 million awarded to the Saratoga Performing Arts Center, to rehabilitate the Roosevelt II Bathhouse in the Saratoga Spa State Park.

Kevin Hedley, owner of Hedley & Co. in Clifton Park, is the chairman of the board of directors of the Saratoga County Chamber of Commerce for 2020.
He will serve as both the chairman of the 27-member board and the Executive Board.
Hedley was chair-elect of the board in 2019, and was the organization’s treasurer, in 2017. He was first elected to serve on the board of in 2014.
Joining Hedley on the Chamber’s Executive Board in 2020 are: Theresa Agresta, of Allegory Studios and CultureTalk, in Wilton, immediate past chair; Skip Carlson, of the Saratoga Casino Hotel in Saratoga Springs, chair-elect; Tara Pleat, of Wicenski & Pleat in Clifton Park, vice chair; and Amy Smith of Saratoga Arms Hotel in Saratoga Springs, secretary and treasurer.
The Chamber will celebrate its 102nd year at its 2020 annual dinner on Thursday, Jan. 23, from 6-9:30 p.m. at the Saratoga Springs City Center. Officials said nearly 1,000 people are expected to attend
The evening will start with a cocktail reception from 6-6:45 p.m., followed by the program running from 7-7:30 p.m. Dinner will immediately follow, along with networking with local business leaders. Dinner will be provided by Mazzone Hospitality.

By Jill Nagy
After more than 20 years in a rural spot on Route 20 west of Duanesburg, Brenda and Kevin Soucy opened a second custom framing shop in a busier location, 714 Saratoga Road (Route 50) in Burnt Hills.
The new shop, Truly Yours Custom Framing, opened in October. An official ribbon-cutting took place Dec. 3.
According to Soucy, some 20,000 cars a day pass by the Route 50 location.
Truly Yours will primarily be Brenda’s shop, while husband Kevin will be the mainstay at the Duanesburg shop, Country Outlet Framing.
“We kind of work as a team,” she said. She may cut the mats for a job in Burnt Hills and then drive out to Duanesburg to cut the frame and glass.
They also live in Duanesburg, right behind the Country Outlet shop.
The couple started out in business selling furniture and gifts as well as doing custom framing. Now, the business is strictly framing and some sales of art work. 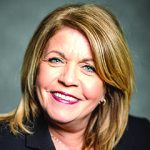 Discover Saratoga announced the hiring of Amy Sgromo and the promotion of Karen Verrigni.
Sgromo joins the team as the assistant director and sales coordinator at the Saratoga Springs Heritage Area Visitor Center. She is responsible for all aspects of the Visitor Center operations and services as well as group tour and sports market sales.
Previously, Sgromo worked as the social sales and bistro manager for the Pavilion Grand Hotel where she acquired new business for the hotel and oversaw the food and beverage for hotel functions. She graduated with a bachelor’s degree from LeMoyne College School of Communication and an associate degree in hospitality management from Onondaga Community College. 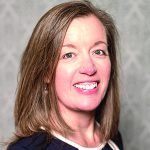 Verrigni was promoted to director of heritage area visitor center, tourism & event sales.
She started her career at Discover Saratoga as the assistant director and sales coordinator at the Visitor Center where she provided service to the group tour market and assisted with all aspects Visitor Center operations, program planning and volunteer recruitment.

Marc C. Conner, provost of Washington and Lee University, innovative leader of interdisciplinary academic programs and longtime advocate of diversity and inclusion, has been named the eighth president of Skidmore College.
His term will begin July 1, 2020.
Conner will succeed Philip Glotzbach, who will retire at the end of June 2020.
“I have deep respect for what Skidmore has achieved as a model of an excellent liberal arts education, and I am tremendously excited to be part of its future,” Conner said. “The College has positioned itself in an enviable place of growth and strength. It has become more diverse. It has increased its endowment. It has become more selective. My role coming in is to put myself in service of Skidmore’s admirable mission of preparing students for lifelong learning and fulfillment.”
Conner, a widely published professor of English, has served as provost of Washington and Lee University, a private liberal arts university in Lexington, Virginia, since January 2016. As chief academic officer, he has led the university in reaffirmation of its accreditation, co-chaired its strategic planning process and overseen the revitalization of its law school.

The Adirondack Trust Co. Community Fund, through its Independent Advisory Committee, has awarded Lend-A-Hand Grants to 35 local nonprofit organizations.
The grants were presented at the Community Fund’s annual grant award reception on Dec. 10. Directors or representatives of the organizations were present at the reception and spoke briefly about their respective organization’s mission and how the grant will support their particular cause.
Grant awards were provided to the following organizations:
• After the Fire. To help families in Saratoga County who suffer loss due to a fire, including gift certificates that they can immediately use.
• AIM Services Inc. To support its Enhanced Respite After School Program through the purchase of educational and recreational materials such as teaching materials, sensory stations, art supplies, books, musical items, recreational items and provisions of healthy snack foods.

By Jill Nagy
“We’ve always wanted to be in the Wilton-Saratoga are,” said Bob Kellogg, president of Warren Tire Service Center Inc.
That will happen in August, when he expects to open a 16th outlet at 573 Route 9 in southern Wilton.
Kellogg said the company has received all the necessary government approvals and recently began clearing ground and putting in foundations and the parking lot.
More extensive construction, by CGM Contracting of Waterford, is scheduled to begin in the spring.
The new facility will be a 6,300-square-foot building with eight service bays, as well as retail and wholesale space. It will be constructed on 5.83 acres across the Northway from the Wilton Mall, in the most southern part of Wilton.