Leslie Morlock will be the new superintendent of Saratoga National Historical Park in Stillwater.

Morlock begins her job on March 28.

“The victory at Saratoga changed the entire course of the American Revolution,” National Park Service Regional Director Gay Vietzke said. “The park has an important role to play as we get closer to America’s 250th birthday in 2026. Leslie’s background in planning, visitor use management and partnerships provides a crucial skill set needed to lead the park as we approach this milestone.”

“I am honored and excited for the opportunity to serve as superintendent at this pivotal site in the history of the United States,” Morlock said. “Saratoga National Historical Park is a unique place to learn about a key turning point in American history, explore nature and honor those who walked the hallowed grounds before us. I look forward to working with the dedicated park team, the Erie Canal National Heritage Corridor, other partners, and the community to preserve this important site for future generations.”

When the COVID-19 pandemic temporarily shuttered fitness studios, Shenendehowa middle school teacher and local spin instructor Brittaney Deitz found herself with a lot of free time on her hands. Prior to the pandemic, she was teaching spin classes five to six days a week at a local studio.

“I enjoy motivating and inspiring people, and it brings me such joy to teach classes and share health and fitness with others,” said Deitz, a Clifton Park native. “So those first few weeks of the pandemic were really tough. I didn’t even have a bike at home because I was at the studio so often that I didn’t need one.”

After a friend gave Deitz a bike, she started doing workouts at home and posting details about them on social media. People began reaching out and encouraging her to teach virtual classes. She was skeptical at first and considered it unlikely that people would be willing to purchase spin bikes for their homes. The bikes are expensive and were difficult to find at the height of the pandemic.

Her husband, Justin, encouraged her to pursue the idea and surprised her by setting up a home spin studio in their living room. Three days later, Deitz taught her first sample class on Zoom with six students. The following day, she opened up her free classes to anyone who wanted to participate. 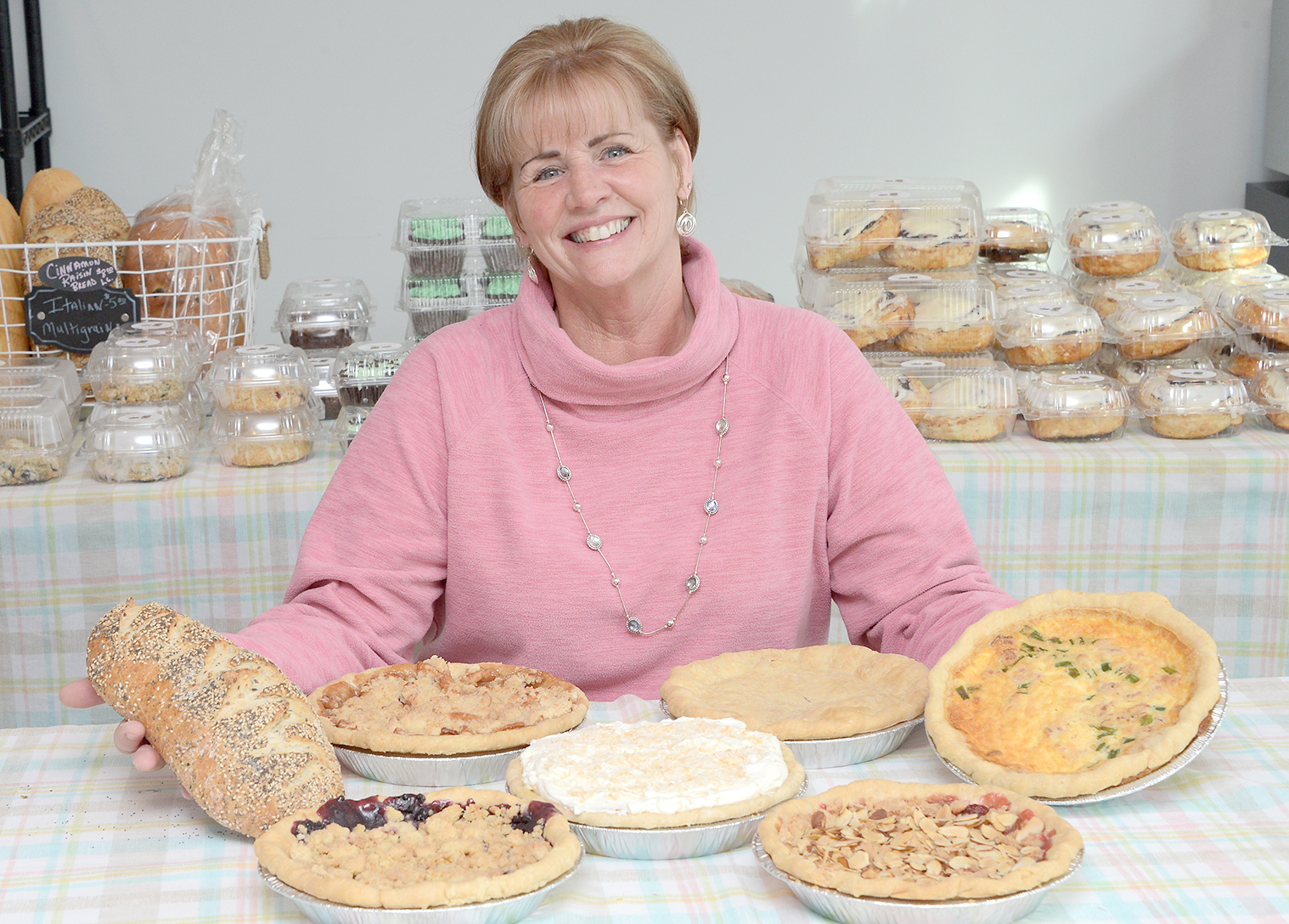 Carolyn Zinn built a following from running a pie stand on Ballard Road and has now opened a store at 20 Gordon Lane in Wilton where she sells her baked goods.
©2021 SaratogaPhotographer.com

Customers with a sweet tooth are visiting Sweet Caroline’s Pies at its new location at 20 Gordon Lane in Wilton, near Northway Exit 16.

Owner Carolyn Zinn said she had built a following from her pie stand on Ballard Road and took the risk to rent a retail shop months into the coronavirus pandemic.

Zinn is a Wilton native who had been away for 20 years when she returned with her husband and family to take care of her aging mother. She had a baked goods and catering business for 10 of those years in Wisconsin.

Customers there called her “Sweet Caroline” and when the time came to start the bakery she always dreamed of, she chose her nickname for her business.

Five years ago, Zinn was running a private lodge in the Catskills doing the cooking. Then she obtained the licenses to bake out of her home, focusing on fresh local produce from Saratoga Apple in Schuylerville and Ariel’s Farm in Gansevoort. She still bakes the apple pies and strawberry pies that are sold at those farms and also supplies Ariel’s with fresh biscuits to serve with the farm’s homemade jams.

Around 10 million U.S. mothers living with their own school-age children were not actively working in January—1.4 million more than during the same month last year, according to new U.S. Census Bureau data.

The pandemic has had a devastating effect on employment overall but especially on mothers’ paid labor. The 10 million not working accounted for over one-third of all mothers living with school-age children in the United States, according to the Current Population Survey.

Last spring, between March and April, some 3.5 million mothers living with school-age children left active work — either shifting into paid or unpaid leave, losing their job, or exiting the labor market all together.

Some 45 percent of mothers of school-age children were not actively working last April.

The school year began in earnest months ago but deep into the academic year, school systems are still trying to figure out how and when to return to in-person classes.

Some have found ways to juggle work, child care and virtual schooling. By January 2021, more than 18.5 million mothers living with their own school-age children were actively working — still 1.6 million fewer than in January 2020.

By Susan E. Campbell
At ease with hair cutting shears in hand or applying makeup for a professional photo shoot, it is not easy to imagine Autumn Wright in a combat uniform.
The owner of Seraphina Divine Beauty, 437 Geyser Road, Ballston Spa, and specializing in bridal hair and makeup, Wright had a four-year tour as a U.S. Marine driving trucks in Iraq. When her deployment ended in 2009 she went “wherever the wind” took her. “All around the country,” she said, from New York to Arizona to Tennessee.

By Susan E. Campbell
The mortgage market is driven by a variety of complex factors that make the times look more or less attractive to those seeking to buy, renovate or refinance a home.
A mortgage originator for three decades, Caroline Hommel of Homestead Funding has experienced just about every permutation and combination of circumstances imaginable, from severe market corrections to record-setting interest rates.
“There have been so many highs and lows over the years. Mostly highs,” said Hommel. “The relationships with customers are certainly high points.”
Hommel joined Homestead Funding in 1995 after a few years as assistant to the PR and communications director for the New York State Association of Realtors and then as a mortgage broker for a small firm.

By Rachel Phillips
For more than 30 years, diners have been enjoying the age-old family recipes and hand-crafted breads and sauces offered by Village Pizzeria on Route 29 in Galway.
The restaurant, which opened in 1988, is owned and operated by Sandra Foster, along with her partner Joseph Guerrera, and is managed by her daughter, Jessica Mancinone.
Foster’s professional career began in 1969, when she became the first female licensed barber and men’s hair stylist in Waterbury, Conn. At the time, cosmetology and barbering were segregated by gender, and Foster pioneered the transition that brought into being the unisex salons that are now standard today.

By Andrea Harwood Palmer
Natalie Sillery is in her 25th year as owner of Saratoga Trunk at 493 Broadway in Saratoga Springs and shows no signs of slowing down.
“My husband and I were in print publishing back in the 80s in New York City,” said Sillery. “I grew up in Rensselaer. My parents were getting older and infirmed. Our business ended after 12 years or so, and we moved from New York City to the town of Brunswick.”
“I was caring for my mom, who had slow progressive dementia moving into an Alzheimer’s situation. I also had a great aunt I was caring for. I took my mom in with me, and my dad had 24 hour care. I knew I had to work for myself,” said Sillery.
She put together a couple business plans.

By Susan E. Campbell
Amberly Bucci is a businesswoman who wants others to know that they, too, can turn their life’s passion into profit.
“For myself, I combined my passion for travel, digital marketing and teaching, and fused them together to create a career that I love: digital marketing with a focus on the hospitality industry,” Bucci said.
Last fall she officially formed Amberly Bucci LLC, a move she said was “long overdue.” After only a few months, the feedback she is getting utilizing digital marketing expertise is “exciting.”

By Christine Graf
Three years ago, Tricia Nussbaum opened The Food Florist in Ballston Spa. She described her business as a mobile food company.
The Food Florist food truck she operates is available to go to farmers markets, local schools and businesses. She also sells frozen, oven-ready meals at a retail locations. All food is made from scratch with a combination of local, organic, and all-natural ingredients, she said.