In 1921, Irish immigrant Michael Minogue purchased a soda bottling plant and distribution center in Granville, NY. After Prohibition ended in the U.S., he was issued the 34th wholesale beer license in New York state.

Today, the business he founded is thriving under owner John Minogue Jr. He said it is the oldest continuously operated family owned and operated beer distributor in New York state.

This year, it has been celebrating 100 years in business.

Minogue was 14 when he first started working part-time for his father, John Sr.. At the time, his father operated just one beverage center in Queensbury.

While Minogue was pursuing a degree in economics from College of the Holy Cross, a friend of his father  who was a retired F.B.I. agent suggested that Minogue consider a career with the F.B.I. Intrigued by the possibility, he moved to Washington, D.C., and entered the bureau’s clerk -to-agent program after he graduated from college in 1976.

“You could work for the bureau as a clerk assisting agents in their work, and after a three-year period, you would be given an opportunity to take the (agent) exam,” he said.

GlobalFoundries, headquartered in Malta, announced that it has publicly filed a registration statement with the U.S. Securities and Exchange Commission relating to the proposed initial public offering of its ordinary shares.

The number of ordinary shares to be offered and the price range for the proposed offering have not yet been determined.

GlobalFoundries has applied to list its ordinary shares on the Nasdaq Global Select Market under the ticker symbol “GFS.”

The proposed offering will be made only by means of a prospectus.

According to GTM, many companies are reporting how outsourcing all or part of the HR function to subject matter experts is an increasingly attractive and time-saving option as businesses struggle to manage the complexities of an ever-changing legal compliance landscape, managing and retaining local and remote talent, and implementing HR best practices that keep employees aligned with business goals.

Companies also report how they improve infrastructure through the implementation of better payroll technology and the best practices in HR processes, freeing up valuable time and resources. By utilizing HR consultants, companies were able to effect changes more quickly. Pinnacle HR consultants have the expertise to implement systems and make improvements to the entire HR delivery system.

Trader Joe’s opened a store in Halfmoon in September, its second outlet in the Capital Region. The grocery chain offers a variety of  food products, most of them under its own label, and a few local, mostly produce, items.

“We know there are a lot of foodies in Halfmoon, and we knew there was some community interest in having a Trader Joe’s in the neighborhood. So, we did our due diligence and decided it was a great fit,” said company spokesperson Rachel Broderick.

The store is located at 2 Halfmoon Crossing. It is a free-standing building, approximately 12,500 square feet, surrounded by more than 100 parking spaces.

Thomas Witte, referred to as Captain Tommy, manages the new store. He celebrates 20 years with the company this year and spent the past six years managing the Trader Joe’s outlet in Colonie.

The store has 85 employees. According to Broderick, approximately 80 percent of them were hired from the local area.

While many area businesses are struggling to find staff, Broderick said, “We are fortunate to have a reputation as a good employer, so we were able to hire a great crew. . . . We are always looking for great crew members, though, so anyone interested is welcome to apply on our website.” 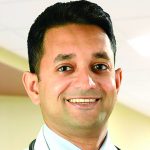 Dr. Riju Banerjee has joined Saratoga Hospital Medical Group – Cardiology. He is one of 11 providers in the growing practice.

A graduate of the Icahn School of Medicine at Mount Sinai, Banerjee completed an internship and residency at Rutgers New Jersey Medical School and a cardiology fellowship at Albany Medical Center. He is board certified by the American Board of Internal Medicine, the National Board of Echocardiography and the Certification Board of Nuclear Cardiology.

Banerjee is a member of the American College of Cardiology. He sees patients at Saratoga Hospital Medical Group – Cardiology at 254 Church St.

He also provides cardiology consultation to inpatients and outpatients at Nathan Littauer Hospital in Gloversville. This service is provided by agreement with Saratoga Hospital in its capacity as an affiliate of the Albany Med Health System.

Lucy’s is the latest addition to the bar scene on Caroline Street in Saratoga Springs. Unlike many, where volume and intensity can be a factor, this establishment aims for cozy and comfortable, according to co-owner Kelsey Whalen.

The bar physically lends itself to that. The bar itself is small and there are a handful or so of tables. Occupancy is 23.

“It’s  a very casual vibe, but welcoming,” said Whalen. “Our slogan is, ‘Lucy’s bar, Come in as you are.’ We truly mean that. All are welcome.

“We want everyone to be comfortable. We want you to walk away with a good cocktail for $10, not 14 which is seemingly the average in Saratoga for a cocktail.”

It opened in late September and business, she said, is strong despite the size. In fact the size appealed to her. She previously operated Whole Harvest, a stored that prepares healthy meals using local products. She closed the store because the bottom line was not going to hold up during the coronavirus pandemic.

But she retained the lease on the space.

“It’s so good,” Whalen said of business thus far. “In terms of business, it’s low overhead, low staffing, easy maintenance, easy to clean, easy upkeep  … We definitely say it’s cozy eclectic.
It’s been wonderful. It’s been really busy. I think we found a niche that wasn’t in Saratoga … A spot to get a good affordable cocktail and not need to buy food.

the Saratoga County Chamber of Commerce

Recently reported September county data indicates that Saratoga County is coming back stronger and more resilient than ever as we continue to emerge from the pandemic.

“Unemployment rates, sales tax collections, lodging, and real estate across the county are seeing tremendous growth when compared to this time last year,” said Todd Shimkus,  Saratoga County Chamber of Commerce president. “We’re excited to see residents and tourists working, shopping, and staying throughout the county, and we hope the numbers continue to rise.”

As of August, the unemployment rate has decreased from 7 percent in 2020 to 4 percent in 2021. The number of employed residents has risen, adding an additional 800 laborers to our county’s workforce. Unemployment numbers have been nearly cut in half compared to last year.

Hotel occupancy has seen a rise throughout the county in 2021 thanks to an increase in leisure demand coming out of the pandemic, and group and corporate travel is starting to rise. Revenue per available room (RevPAR) has nearly doubled since this time last year, showcasing that out-of-town visitors are beginning to explore our vibrant county again.

“Our lodging partners had a strong season with some even setting revenue records,” said Darryl Leggieri, president, Discover Saratoga. “While we didn’t break revenue records in 2021, the occupancy and average daily rate that our lodging partners were able to command shows a strong return to our historical patterns in 2019. The future looks bright.”

Open enrollment for coverage in a 2022 Qualified Health Plan starts Nov. 16 for new and returning consumers and ends on Jan.31.

Significantly, officials said, expanded federal tax credits remain available to New Yorkers who enroll in Qualified Health Plans (QHP.) This enhanced American Rescue Plan Act (ARPA) financial assistance is available now, including to higher-income individuals for the first time. Consumers who receive premium tax credits, more than 60 percent of QHP enrollees, will see no change in their premium costs for 2022, or in some cases a small decrease in the cost of coverage compared to 2021.

According to the Health Department, one in three New Yorkers are enrolled in health coverage through the Marketplace. Enrollment has increased across all marketplace programs since April 2021, when the state began implementing ARPA tax credit and Essential Plan (EP) enhancements.

All 12 insurers that offered Qualified Health Plans last year will offer them again in 2022. Consumers who enroll in a QHP between Nov. 16 and Dec. 15 will have coverage starting Jan.  1.

She didn’t realize it at the time, but when Jesse Peters was invited to bid on a local airport habitat restoration project, her sustainable landscape business, Jessecology, would soon take off in a new direction.

“I didn’t win the bid on the plant piece of the project, but it was illuminating to me how great a need there is for propagating seeds of native plants for projects like these,” said Peters, an ecologist now in her 16th year of business.

Peters has been growing plants from seed for 10 years for wholesale use and do-it-yourself gardeners. But she said harvesting seeds for resale “was basically a hobby until that project for 90 acres shed light on the need.”

Any surplus she had in the past she typically donated to organic farms in the area to sow native plants around the fields.

“The wildflowers help bring in more pollinators to the farms and improve their crops,” she said.

A new doughnut shop, 518 Donuts, has opened in Clifton Park.

This one will combine doughnuts with speciality fried chicken.

Glenn Babinueau, Joseph Carl, and Sam Clifford officially opened the doors to 518 Donuts at 7 Southside Drive in Clifton Park and  business has been good.

“Day one, there was a line all the way down the sidewalk waiting for the doors to open,” said Clifford.

He said all three owners have roots in Troy, where they were in the process of opening what was set to be their flagship shop. But they took one look at The Shops at Village Plaza and   decided they would plan for locations in both Clifton Park and Troy.

“We basically walked in and said,’We will take it.’ We knew we had to move quickly on it,” said Clifford.